The Millers Point and Sirius building tenants’ long, hard struggle against eviction from their inner Sydney community is reaching a critical point. On September 21, Housing NSW provided the following statistics to the Millers Point Estates Advisory Board:

In sum, at the time of writing, 572 of the 579 public housing tenants in Millers Point, Dawes Point and the Sirius building, who were told on March 19, 2014, that they would have to relocate within two years, have left their homes or are about to.

Starved of funding, then wealthy

The area has become the domain of extremely wealthy households. The median price for the 159 sales is $2.39 million. Recent sales include a three-bedroom home with one bathroom for $3,561,000 and a five-bedroom terrace for $5,0050,000.

If the present trend continues the Millers Point sales can be expected to net around $600 million. Another 67 properties (comprising 26 sales) remain to be sold.

After years of neglect, many of the turn-of-the-century apartments, which the Sydney Harbour Trust built for waterfront workers and handed over to the Department of Housing in the mid-1980s, are being repaired and smartened up for sale. Tenants interviewed told how their requests for maintenance were ignored for years, leading to serious deterioration.

Barney Gardner, who was born in Millers Point and is convenor of the Millers Point, Dawes Point and The Rocks Public Housing Tenants Group, described the government’s behaviour as “criminal”. His home had deteriorated significantly in the 27 years he was resident. Despite repeated requests, Housing NSW refused to fix the leaks, rising damp and mould, Gardner said.

They told us that they didn’t have the money to repair the homes but they certainly have the money now. They waited until we were forced out of our homes before they started fixing them up. That’s criminal.

From a state of disrepair to repairs in Millers Point. Alan Morris

Ex-tenants are also affronted by the fact that many of the homes that have been sold are empty, rented out or being used for Airbnb. Kent Street, one of the main roads running through Millers Point, has been renamed Rent Street by ex-tenants.

Can the Sirius survive?

The $600 million sales figure does not include the Sirius building. Its predicted selling price is at least $100 million.

When the minister refused to accept the Heritage Council’s unanimous recommendation that Sirius be declared a heritage building, he said that a heritage listing would reduce the sale price by $70 million.

Unlike Millers Point properties, the Sirius building has not been put on the market. The sale of Sirius was slowed down by a judgment delivered in the Land and Environment Court on July 25, 2017.

In a case brought by the Millers Point Community Association, the judge found that, in deciding not to follow the Heritage Council’s recommendation to declare Sirius a heritage building, the then-environment minister made two serious procedural errors: “by misdirecting himself as to the proper meaning of the words ‘…would cause undue financial hardship to the owner…’,” and “did fail … to make a tentative or preliminary determination as to whether Sirius is of state heritage significance, and, in so doing, failed to discharge his statutory duty”.

These errors rendered the decision invalid. 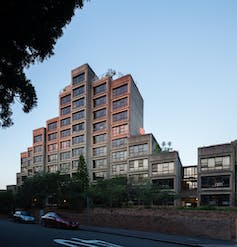 The Labor opposition has promised, if elected to government, to retain the Sirius building for social housing. AAP

In another positive development in the campaign to save Sirius for public housing, the building was recently added to the World Monuments Fund’s 2018 watchlist. The organisation has called on the New South Wales government to “respect the recommendation of its heritage experts and allow its citizens to maintain an important social legacy”.

Despite the expert opinions, on October 25 the environment minister, Gabrielle Upton, again refused to grant Sirius heritage status. She said the government plans to sell the building to a private developer who will be able to demolish Sirius.

In response, Save our Sirius chairperson Shaun Carter said:

Let’s be clear about this. It is a decision based on a massive development play – 250 apartments on this site where only 79 now sit – and it’s part of the current government’s cultural war to get rid of a building they see as a symbol of the left.

We are talking here about an apartment block built specifically for public housing tenants, in good condition and recommended for heritage listing. To its credit, the Labor opposition has pledged to retain the Sirius building and all unsold Millers Point properties for social housing.

As the state election nears, perhaps the government might conclude that selling the building to a developer who will demolish it to build exceptionally costly apartments is a bridge too far.

The government may be patting itself on the back for generating hundreds of millions of dollars by displacing the public housing tenants in Millers Point and Sirius.

However, I would argue that what has occurred is an act of “communicide” – the planned, deliberate and irreversible destruction of a historic community.

The displacement and sell-off represent what Dillard and Ruchala have called “administrative evil”. They argue that in a policy context premised on administrative evil, the primary focus is on revenue and expenditure. The human costs of policymaking are pushed to the side.