This is an article from I’ve Always Wondered, a new series where readers send in questions they’d like an expert to answer. Send your question to alwayswondered@theconversation.edu.au

I’ve always wondered why a hen never looks down when it scratches. Surely if it did so it could lead to greater success, but is there something anatomical that dictates that the head must be up when it scratches? – Guy

If you or someone you know keeps chickens, you’ve probably seen them scratching in the dirt to turn up worms and bugs. They generally have their heads up while they scuffle with their feet, then move their heads down to peck up any tasty titbits.

It looks like they’re turning their gaze from up to down. But chickens’ eyes are more complicated then you might think: they can look up and down at the same time.

Chickens can simultaneously focus on something about 20cm away, and an object far in the distance (like a bird of prey). They appear not to look down when they scratch because holding their heads up allows them to scan the horizon for predators and focus on the ground at the same time.

The reason chickens can do this is because their area of binocular vision, where they can focus best, is very extensive. This is not the only odd thing about chickens’ vision; they can also move their eyes independently, unlike us.

Most birds (except for owls and a few other birds of prey like falcons) have eyes on the sides of their heads, which means they have a much wider field of view than we do. But it also means their field of binocular vision – the area where both eyes can see the same thing, creating depth perception – is much smaller than ours. 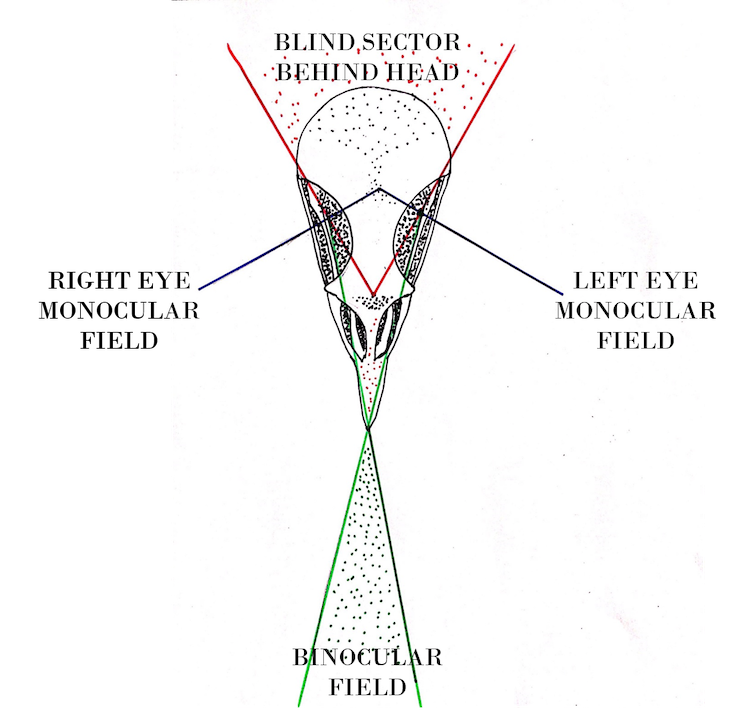 Seeing directly in front of their face is difficult for most birds, except owls. “Ballistic” peckers, those that close their eyes during their explosive peck, have large bill blind spots, and remember where to peck. Other birds have a narrow blind spot, just like how horses are blind in front of their noses. On the other hand, some birds have smaller blind spots over their bills, which offers them more visual control of their beaks. One of the most amazing dexterous birds, the tool-using New Caledonian Crow, actually moves its eyes forward so that its binocular field includes the tip of the bill and the tool.

Almost all birds (the colourblind kiwis being one notable exception) are visual creatures. Birds’ eyes are generally pretty big. They are about 15% of their head mass (ours are only about 1%) and have three eyelids (upper, lower and a clear one called a nictitating membrane).

Also, they aren’t shaped like ours. Rather than being round, they are like a squashed oval, with a bit sticking out that houses the cornea and lens. There is a ring of bone that separates the smaller front end from the larger back end called the sclerotic ring. This ring has 10 to 18 small bones, called ossicles, each with a muscle attached that allows for greater and quicker focusing than mammal eyes. 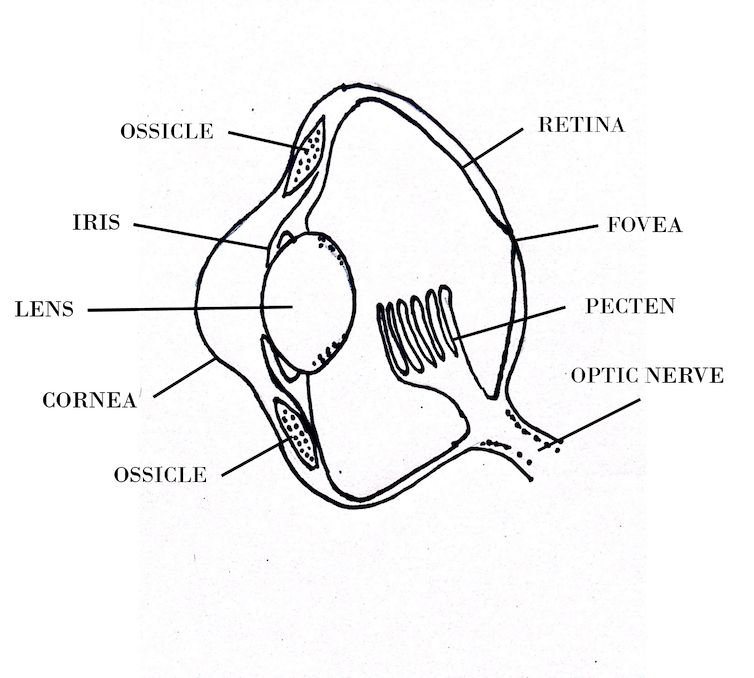 Unlike mammal eyes, both the cornea and the lens change shape and aid in focusing. Light passes through the pupil and hits the retina at the back. This is a very different retina to ours.

Human eyes have photoreceptors called rods and cones that allow us to see in colour (cones) and at night (rods). Humans have about six million cones in three types: blue, red and green, mostly packed into an area known as the fovea.

The fovea is a pit in the back of our eye that allows for high-detail colour vision. It’s why your vision is clearer when you look directly at something, rather then seeing out of the corner of your eye.

Bird’s eyes have rods and cones. But they also have pigmented oil droplets that increase the sensitivity of colour vision. Many have additional colour receptors that can see into the ultraviolet spectrum. In other words, birds have colour vision that far exceeds ours, and we don’t even have words to describe much of what they can see.

Most birds (excluding nocturnal birds like owls) have multiple fovea, or a streak or band of concentrated receptors (the area centralis or visual line) or both. For example, pigeons have two fovea — one for distance vision and one for close-up vision. This is why pigeons bob their heads: they are moving their heads to switch between the focus points of the two fovea.

As birds can see ultraviolet light, that means that when a bird looks at another bird, they don’t see what we see.

In fact, a study of 312 bird species in 142 families showed that all bird families have ultraviolet feathers. Even more interestingly, male and female birds that look the same to us look very different under ultraviolet light – so birds can often tell another bird’s gender when we can’t.

We generally try to work out a bird’s species, or find a reason for its behaviour, by watching it. But the reality is that human see a very different world. This can confound our observations on everything from what direction a chicken is looking in, to entirely new bird species that are indistinguishable to our eyes.