It’s more than three weeks since the alert level on Bali’s Mount Agung was raised to its highest level. An eruption was expected imminently and thousands of people were evacuated, but the volcano has still not erupted.

I keep getting emails from people asking me whether they should travel to Bali. I tell them to check the Australian’s government’s Smartraveller website, or contact their airline or tour operator.

They should also keep an eye on the media and any updates from the Indonesian Centre for Volcanology and Geological Hazard Mitigation.

Read more: Bali’s Mount Agung threatens to erupt for the first time in more than 50 years

Reports this week from the Indonesian National Disaster Management Authority show a decline in seismic energy recorded near the volcano.

But does that mean the threat of any eruption is over?

The last major eruption of Mount Agung was in 1963. Since then, there have been two known periods of activity at the volcano site without an ensuing eruption.

In 1989, a few volcanic earthquakes occurred and hot, sulphur-rich gas emissions were observed with no eruption.

Between 2007 to 2009, satellite data showed inflation (swelling) of the volcano at a rate of about 8cm per year, probably caused by the inflow of new magma (molten rock) into the shallow plumbing system. This was followed by deflation for the next two years, again without an eruption.

The current volcanic activity – mainly the number of earthquakes – has not subsided since the alert level was raised to level 4. It continues to fluctuate at high levels, with more than 600 earthquakes a day. This indicates that the threat of an eruption is still high, despite a general decline in overall seismic energy.

This past weekend saw the highest number of daily earthquakes, with more than 1,100 recorded on Saturday October 14. 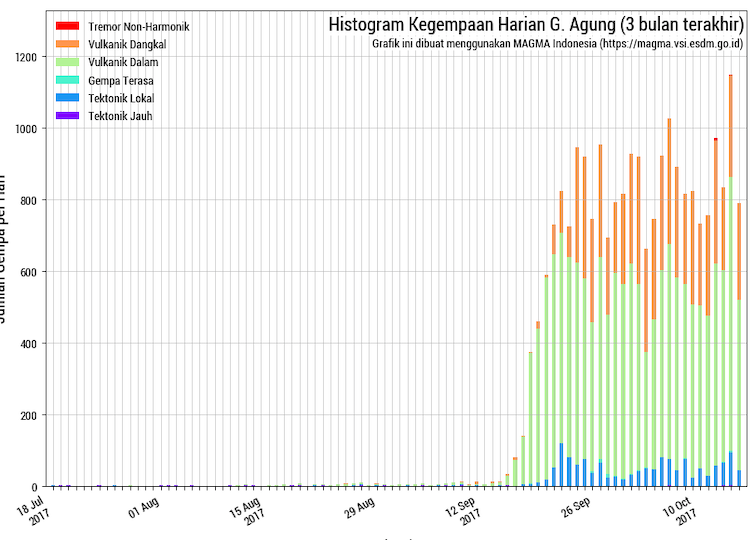 The latest statement from the Indonesian Centre for Volcanology and Geological Hazard Mitigation was released on October 5. It said earthquake data indicates that pressure is continuing to build up under the volcano due to the increasing magma volume and as magma moves towards the surface.

It’s all about the gas

Magma contains dissolved gases (volatiles) such as water, carbon dioxide and sulphur dioxide. As magma moves towards the surface, the pressure becomes less and so gas bubbles form, akin to taking the top off a fizzy drink bottle. These gas bubbles take up additional space in the magma and increase the overall pressure of the system.

The amount of gas, and whether or not gas is able to escape from the magma prior to eruption, are major factors that determine how explosive (or not) any volcanic eruption will be.

If the gas bubbles forming in the magma stay within as it ascends beneath Mount Agung, then it could lead to a more explosive eruption. If the gas formed is able to escape, it might depressurise the system enough to erupt less violently or not at all. 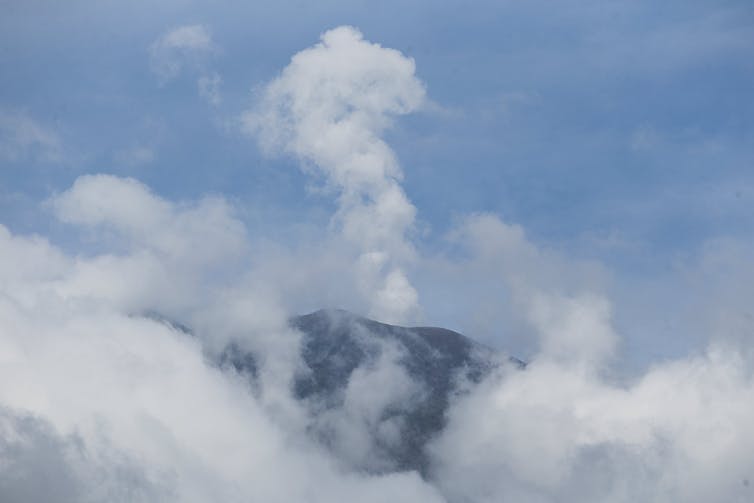 White gas plumes, composed mainly of water vapour, have been observed. They have typically reached 50-200m above the crater rim at Mont Agung, and up to 1,500m on October 7. This water vapour is likely due to the hydrologic system heating up in response to the intruding magma at depth.

During the 1963 eruption, Mount Agung produced a significant amount of sulphur-rich gas that caused an estimated global cooling of 0.1-0.4℃. In this current phase of activity, we are yet to see any significant release of sulphur dioxide from the intruding magma.

How big would an eruption be?

It’s not easy to predict how big any eruption at Mount Agung would be. Analysis of volcanic material deposited during previous eruptions over the past 5,000 years suggests that about 25% of them have been of similar or larger size than the 1963 eruption.

On the neighbouring island of Java, the explosive 2010 eruption of Mount Merapi saw more than 400,000 people evacuated and 367 killed. This was preceded by increased earthquake activity over a period of about two months. It was the volcano’s largest eruption since 1872.

The monitoring data and studies of the volcanic rocks produced by the Merapi eruption suggest the relatively fast movement of a large volume of gas-rich magma was the reason for the unusually large eruption.

In 2010, the Indonesian Center of Volcanology and Geological Hazard Mitigation issued timely forecasts of the size of the eruption phases at Merapi, saving an estimated 10,000–20,000 lives.

The Indonesians are keeping a close eye on seismic activity at Mount Agung and the public can watch a live seismogram. 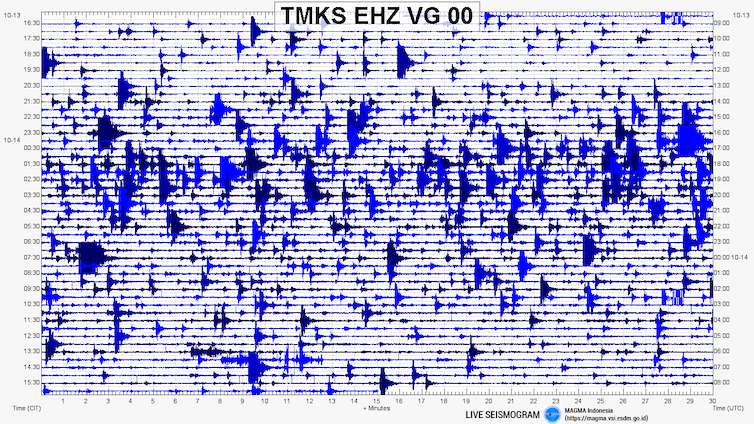 Screenshot of the Mount Agung seismogram showing the large number of earthquakes recorded on October 13 and 14, 2017. Indonesian Centre for Volcanology and Geological Hazard Mitigation

The last two eruptions of Mount Agung in 1843 and 1963 had a Volcanic Explosivity Index (VEI) of 5, on a scale of 0-8. A 0 would be something like a lava flow on Hawaii that you could generally walk or run from, and 8 would be a supervolcanic eruption like Yellowstone (640,000 years ago and 2.1 million years ago) in the United States or Toba (74,000 years ago) in North Sumatra, Indonesia.

Based on a history of explosive activity at the volcano, the Indonesian authorities are maintaining the current hazard zone of up to 12km from the summit of Mount Agung.

It’s still considered more likely than not that it will erupt, but the question remains: when?