The hot, dry Australian desert may not come to mind as an ideal location for waterbirds to breed, but some species wait years for the opportunity to do just that.

New research has shed light on one of Australia’s most enigmatic birds, the banded stilt. This pigeon-sized shorebird has long been a source of intrigue due to its bizarre and extreme breeding behaviour. They fly hundreds or thousands of kilometres from coastal wetlands to lay eggs that are 50-80% of their body mass in normally dry inland desert salt lakes, such as Lake Eyre, on the rare occasions they are inundated by flooding rain.

Such behaviour has been a mystery for decades; described for the first time in 1930, just 30 breeding events had been documented for the entire species in the following 80 years.

To investigate this behaviour, and to assess the stilts’ conservation status, we began a study in 2011, during which I was based in outback South Australia, ready to jump into a small plane after every large desert rainfall. We also satellite-tagged nearly 60 banded stilts, using miniature solar powered devices around half the size of a matchbox. 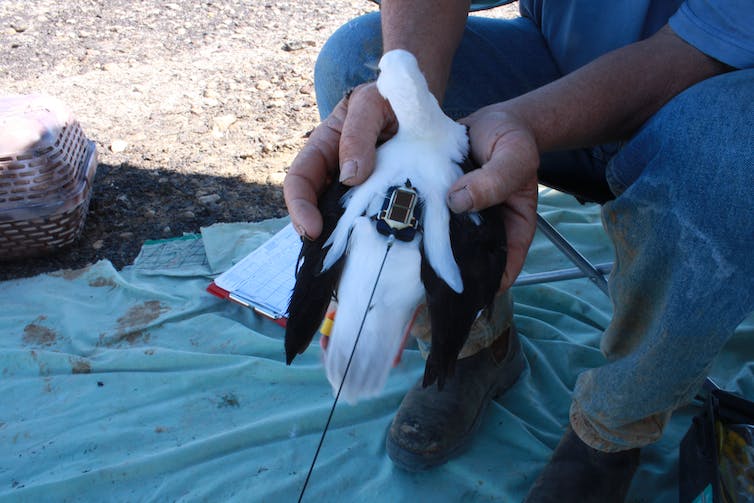 This focused survey effort – which required overcoming the logistical challenges of very remote sites, knee-deep mud, heat and flies – has revealed major new insights into how banded stilts breed and the incredible distances they travel: we recorded one bird that flew 2,200km in just two nights.

The research revealed that, on average, banded stilts respond within eight days to unpredictable distant flooding of outback salt lakes. They leave their more predictable coastal habitat to travel 1,000-2,000km in overnight flights to arrive at the newly flooded lakes and take advantage of freshly hatched brine shrimp.

Brine shrimp eggs lie dormant in the lakes’ dry salt crust for years or decades between floods, but upon wetting they hatch in their billions, creating a “brine shrimp soup” – a rich but short-lived banquet for the nesting stilts. 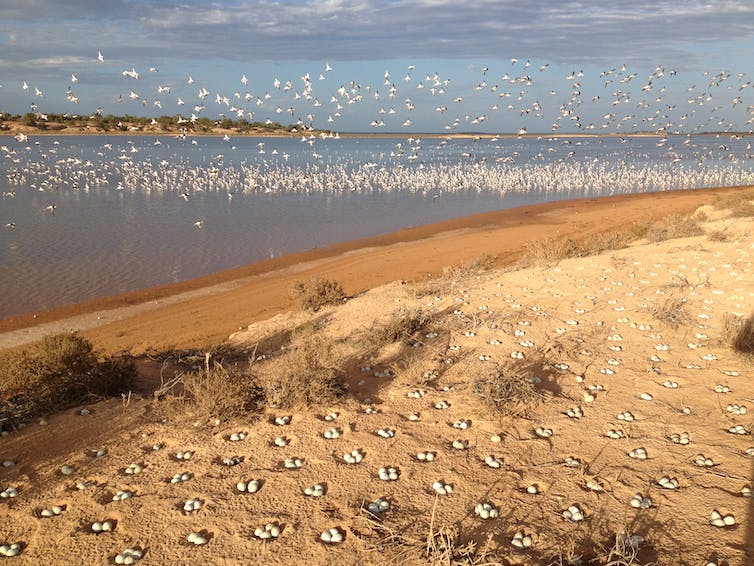 During the six-year study, we detected this nomadic movement and nesting behaviour seven times more often than it had been recorded in the previous 80 years. Although the banded stilts were previously thought to require large once-in-a-decade rains to initiate inland breeding, we found that small numbers of banded stilts respond to almost any salt lake inundation, arriving, mating and laying eggs equivalent of 50-80% of their body weight, despite high chances of the salt lake water drying before the eggs could hatch or chicks fledge.

Many times the eggs were abandoned as salt lake water dried. On other occasions some chicks survived long enough to learn to fly – although late-hatching chicks ran out of food or water and starved.

Once we found out that stilts needed much less rain to breed than previously thought, we used satellite imagery to reconstruct the past 30 years of flooding for ten salt lakes in South and Western Australia.

These models showed that conditions have been suitable for breeding more than twice as often as breeding events have actually been recorded. It seems that stilts’ nesting behaviour is so remote and hard to predict that scientists have been missing half the times it has happened.

Salt lakes in northwestern Australia are vital for banded stilts’ breeding. Our satellite tracking showed that birds from across the continent can reach these lakes after rain. Satellite images also suggested these lakes fill with water much more frequently than southern breeding sites.

These lakes are also largely free of native silver gulls (the common seagulls seen around our cities), which are predators of stilt chicks. 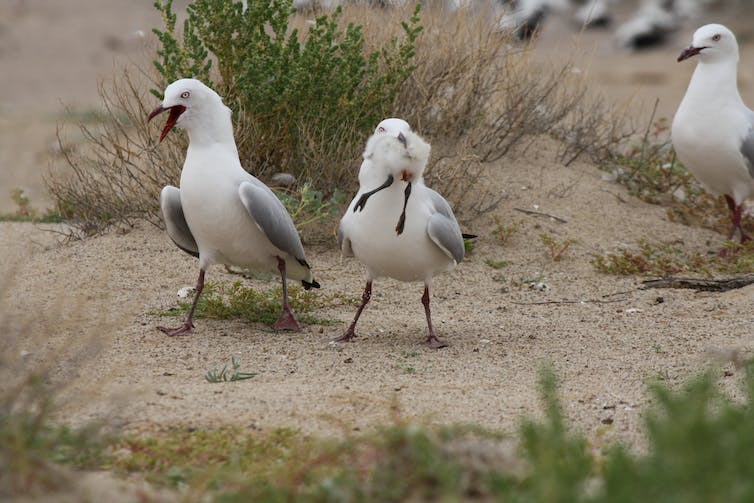 Silver Gulls fighting over a banded stilt chick on Lake Eyre. These gulls, common in Australian cities, follow the stilts and can eat thousands of eggs and chicks. Reece Pedler, Author provided

But other southern Australian breeding lakes are dramatically affected by gull predation. In one instance, a colony of 9,500 pairs (around 30,000 eggs) had less than 5% of its chicks survive, despite abundant water and brine shrimp on offer. Observations made near the colony suggested that a chick was being eaten by gulls every two minutes. Nearly 900 chicks and 350 eggs were eaten in the 30 hours we watched the colony.

Unfortunately, even the lakes that are relatively gull-free are now under threat from human development, despite being in one of the most remote parts of the world. Lakes Disappointment, Mackay, Dora, Auld and others surrounding them in the Little Sandy and Great Sandy Deserts are the subject of plans for potash mining.

The most advanced plans relate to Lake Disappointment, where Reward Minerals plans to construct a series of drainage trenches and 4,000 hectares of evaporation ponds on the lake bed to harvest potash for use in fertilisers.

This action will create permanent brine pools in some parts of the lake, and prevent other areas from receiving any water. As surface water drains into evaporation ponds, it’s likely the first rains after a long dry spell will no longer prompt mass brine shrimp hatching. Without this brine shrimp “soup”, banded stilts cannot breed at the site. 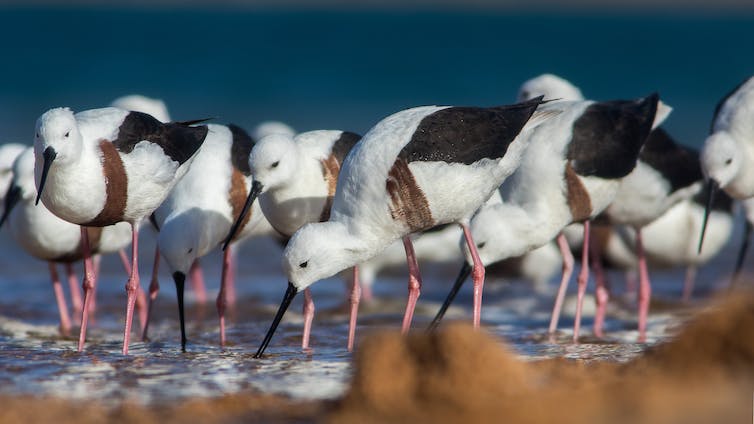 Meanwhile, the coastal habitat that supports banded stilt for the rest of the year is also changing. Sites that are home to thousands of birds, such as parts of the Dry Creek Saltfields and Bird Lake in South Australia, have been drained in the past two years.

If both the stilts’ inland breeding and coastal refuges are under threat, how can they survive?

This research offers insight into the conservation of highly mobile species, which may travel hundreds or thousands of kilometres in a year. Banded stilts are listed as vulnerable in South Australia, but have no conservation rating in the four other states in which they are found.

Individual banded stilts appear to operate over vast spatial scales, crossing between state jurisdictions in single overnight flights. Their episodic breeding events are hard to find and even more difficult to manage. Between breeding events, long-lived adults depend on refuges around the country which are being impacted by human activity, including potentially longer, harsher dry periods from climate change into the future.

These birds epitomise adaptation to unpredictable changes in their environment, but habitat loss and a warming climate may threaten them as much as any other species.