A new techno bubble is inflating above the meadows of Silicon Valley: lab-grown meat, which plays a major part in what’s being called cellular agriculture (CA).

Based on a seductive story of providing food with zero consequences, CA promises to get rid of the ethical, environmental and health costs of animal husbandry. How? By growing animal products without the animal and its body.

This movement is very much aligned with the inflated rhetoric of the innovation economy. Hundreds of millions of dollars are being sunk into the promise of CA. People like Sergey Brin, Bill Gates, Peter Thiel and other venture capitalists are reportedly among notable investors.

But does this techno-capitalist mindset really fit our food system?

In my view, these initiatives are aimed at prolonging the West’s excessive consumption of meat, rather than genuine attempts to deal with the problems they claim to solve.

As far as we know, the first time someone ate a piece of in-vitro meat was in Nantes, France in 2003. As part of our art installation Disembodied Cuisine, we grew about five grams of a frog muscle tissue and served it to six guests.

This was part of the Tissue Culture & Art Project, which I set up with my collaborator, Ionat Zurr. Since 1996, we have used tissue engineering to probe the changing relationship humans have to life, including to food, which is one of our most intimate connections. 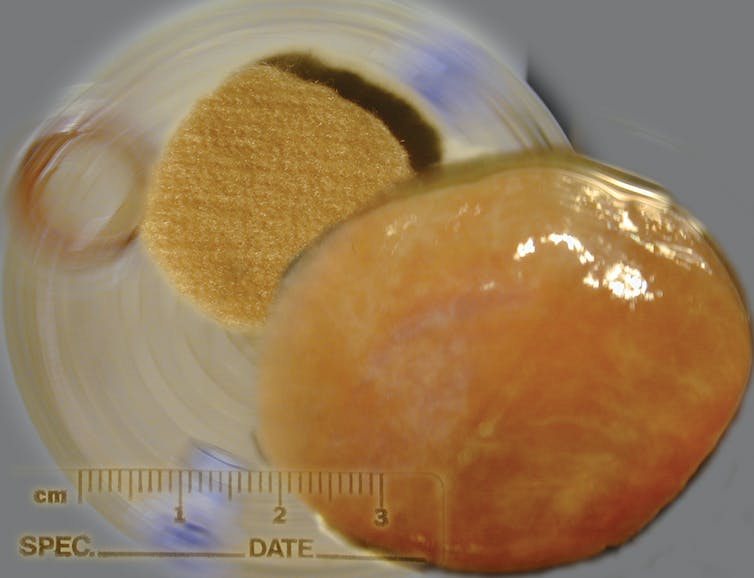 Tissue Engineered Steak No.1 2000 A study for Disembodied Cuisine. This was the first attempt to use tissue engineering for meat production without the need to slaughter animals. The Tissue Culture & Art Project, Author provided

But despite its artistic origins, CA is ascending rapidly up the curve towards what’s known as “the peak of inflated expectations”, according to Gartner’s technological development hype cycle.

Now that commercial interests are intertwined with the development of CA, it’s getting harder to verify the technology: trade secrets, nondisclosure agreements, and fancy product launches at non-academic conferences such as TED and South by South West (SXSW) arguably obscure, excite and misinform.

Indeed, claims about resources, costs and returns are designed to attract investors more than actual consumers.

Take, for example, the suggestion that “clean meat does not require antibiotics or hormones, making it a safer product for consumers”.

It may be created without controversial “growth hormone” drugs, but cells growing outside the body will not proliferate and mature without proper hormonal signals and growth factors that instruct them to do so.

Lab grown meat is a reality, but is it a solution?

In other words, CA aims to keep us eating meat at and beyond current levels.

If there is a lesson from our current modes of large-scale meat production, it’s that optimising and upscaling living systems towards a desirable outcome – namely, industrial farming – is not always environmentally sound.

The environmental impact of generating and transporting feed and dealing with the waste of factory scale meat production might not be wholly different in factory-grown meat.

When it comes to the health issues and health benefits of CA, the risks of over-consumption of animal based-protein are also rarely discussed.

This is not surprising, as the only way to generate investment is to promise a growing market for the product. Therefore, by Silicon Valley logic, money must be invested in changing attitudes towards a techno fix. That cash will rarely go to a campaign for behavioural change to reduce meat consumption in the west.

Simply reducing meat in our diet is a much simpler, albeit non-technological, step in the right direction. 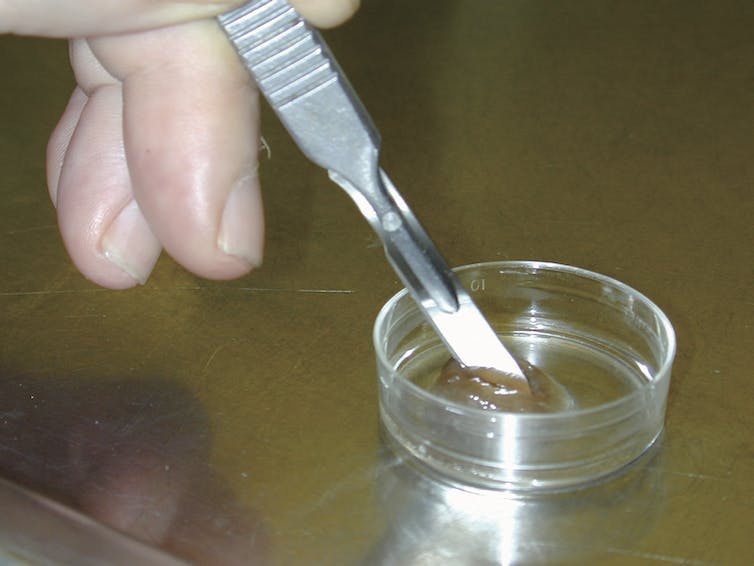 In many ways, growing meat in the lab is an over-engineered solution to problems associated with current meat production and consumption.

Changing public attitudes towards engineered food is often based on the premise that it is biologically identical to meat from a body, but this move from farm to factory might ultimately be a hard sell. And this is probably one of the reasons for so many PR and marketing people in the field are working to bring about this perceptual change.

A much more realistic approach to CA is to treat it like molecular gastronomy: an expensive, novel and luxury experience for the 1%, and not something that will save the world any time soon.

After eating the lab-grown frog steaks in 2003, I made a decision to reduce my meat consumption to almost zero. And I’m still around, albeit generating a massive carbon footprint touring the world trying to explain why CA might not be the techno fix we are hoping for.