Do astronauts get space sick when they travel from Earth to the International Space Station? – The students of class 3E, Ferny Grove State School, Brisbane.

This was a great question. If any of the students of class 3E get the opportunity to fly in space, just slap on an anti-nausea skin patch and go for it! Space sickness discomfort is real but if it happens to you, it will be short and you will remember the space voyage experience forever.

Yes, astronauts can get space sick travelling to the International Space Station. It is less likely travelling in the cramped Russian Soyuz spacecraft used to transport astronauts there now, than the old Space Shuttle that was used until 2011. The ability to move around in the Space Shuttle increased the chance of space sickness happening. Space sickness affects up to half of the astronauts during their first few days on the space station.

The idea of an astronaut barfing into their space helmet sounds funny, or embarrassing, at first. However, as astronaut Mike Mullane has said in his biography, it could be fatal - particularly if the astronaut was spacewalking. The vomit could smear the inside of the helmet, blinding the astronaut. And because it could not be removed, it could be inhaled or clog their oxygen circulation system. 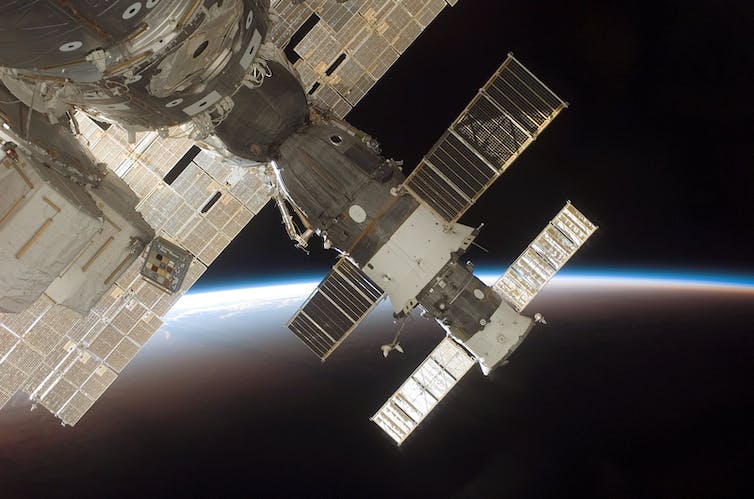 These days astronauts travel to the International Space Station via the Russian Soyuz spacecraft. Flickr/NASA, CC BY

As you probably know, gravity is lower inside the International Space Station. Gravity is the force that pulls us down to the ground. The low gravity in space allows astronauts to float around, which looks very fun, but it can help cause space sickness.

Recent experiments show that space sickness is related to our inner ear. Two separate parts of the inner ear respond to rotation and sudden changes in direction. If you shake or move your head very quickly, you can get dizzy and some people may even feel sick. However, this normally passes very quickly.

Read more: Australia’s back in the satellite business with a new launch

This normal response is upset under low gravity - your inner ear thinks you are constantly moving. It takes some time to adapt to the new condition of weightlessness. It is made worse if you move your head while your body is still adapting. This is why previous astronauts travelling in the larger Space Shuttle were prone to space sickness more than the current astronauts travelling in the cramped Soyuz spacecraft – because in a confined space, the astronauts were less likely to move their heads around very much. 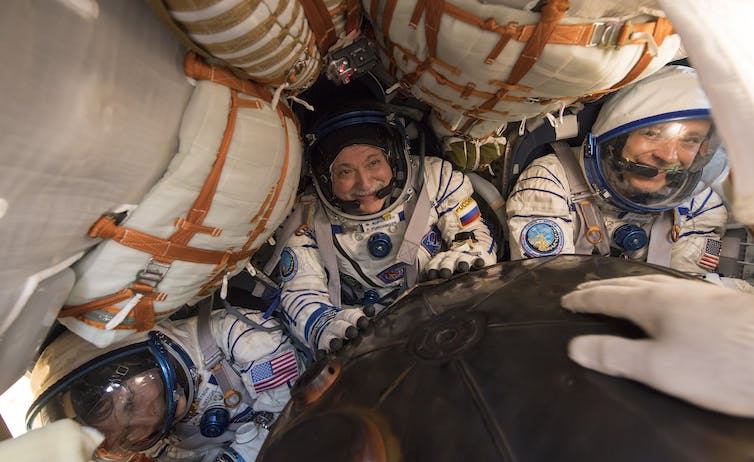 Space sickness affects many, possibly up to half, of the astronauts the first few days on the space station. NASA/Bill Ingalls

Space sickness was not talked about in the early space missions. The original Mercury and Gemini spacecraft were, like the current Soyuz, cramped. It wasn’t until the Apollo and later missions that space sickness became of concern to NASA.

In 1983 the first detailed study was carried out aboard a Space Shuttle flight (STS-7) by astronaut-doctor Norm Thagard. His and all later studies were hampered by the astronauts themselves. None of them wanted to admit to being space sick. They were worried that mission control might remove them from space walking opportunities, or even worse, that they might not get included on later space missions.