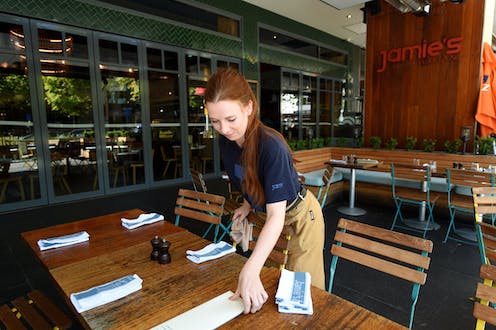 A Senate committee has finally handed down a report on the Fair Work Commission’s decision to reduce Sunday penalty rates for workers in a range of service industries.

The report recommends that the government bring in legislation to overturn the decision, citing mixed evidence of the impact of the penalty rate cut, and the fact that “penalty rates are not a luxury”.

However, as I presented in evidence to both the Senate and the Commission, there needs to be more of a focus on the adverse effects of lower wages for the economy as a whole. While there has been much discussion about the implications of the decision for workers and employers, the broader context has been missing.

Wages policy discussion in Australia over the past 40 years has been dominated by the belief that we have a problem with excessive wages and restrictive working conditions. The objective of wages policy has been to push down the wage share of national income and remove restrictions on working conditions. But this view is not backed by the research.

In my evidence I pointed to several studies showing the impact of minimum wages, beginning in the 1990s, that overturned the older idea that cuts in minimum wages could yield substantial employment gains.

The policy consensus on the need to cut wages can be traced back to the 1970s, when there was an upsurge in the wage share of GDP with a substantial impact on profitability and employment. This lead to the notion of a “real wage overhang” (wages growing more slowly than productivity), which could only be resolved by a lengthy period of restraint.

The real wage overhang was largely eliminated as a result of the 1980s Prices and Incomes Accord between the Hawke-Keating Labor government and the Australian Council of Trade Unions. However, as in other areas of economic policy, the concerns of the 1980s have continued to dominate thinking on wages policy.

As recently as 2014, the government was warning of the danger of a “wage explosion”. This danger was non-existent and the real problem is the opposite - that the wage share is too low.

In the 1970s and 1980s, high inflation was a major problem and the policy response was to constrain wages growth as much as possible. In recent years, however, inflation has been too low, not too high.

Virtually all the changes that have been made to industrial legislation over the past 40 years have had the effect of weakening the unions, and thus reducing workers’ bargaining power.

Notable examples include restrictions on the right to strike, bans on secondary boycotts, and a presumption against “pattern bargaining”.

Under LNP governments, these policies have been reinforced by the overt use of state power against unions, most notably by the Heydon Royal Commission and the Australian Building and Construction Commission under Commissioner Nigel Hadgkiss, who was recently forced to resign after admitting to breaching the acts he was supposed to enforce.

The massive efforts to detect and punish trivial wrongdoing by unions (such as a fine of A$50,000 for encouraging workers to wear shorts to work) contrasts with the softly-softly approach response to massive levels of wages theft exposed in cases such as that of the convenience store chain 7-Eleven, where underpayments of more than A$100 million resulted in no civil or criminal penalty.

We are finally seeing some response to this with the Fair Work Amendment (Protecting Vulnerable Workers) Bill 2017, but it remains to be seen if this act is enforced any more vigorously than previous ineffectual laws

The decision by the Fair Work Commission to reduce penalty rates continues the trend of labour market policy over the past four decades, which has driven the wage share of GDP to an all-time low.

It seems unlikely, however, that this policy is politically or economically sustainable as discontent with unfair and unequal income distribution increases.

Instead of continuing to pursue policies that the Fair Work Commission now admits will leave workers worse off - it’s time to promote fairer policies that are in workers best interests.

The decision by the Fair Work Commission to reduce penalty rates continues the trend of labour market policy over the last four decades. Policies of wage restraint and labour market “flexibility” such as cuts in penalty rates are a response to the problems of the past.

Given wages currently make up the lowest ever percentage of Australia’s GDP, we need a new approach. Cutting the incomes and entitlements of Australia’s lowest paid workers is the wrong way to go.