Home buyers across Australia could face higher energy bills because of a loophole that allows builders to sidestep energy efficiency requirements.

Since the early 2000s, all new homes built in Australia have to meet minimum thermal performance standards. In about 70% of cases, these homes are accredited using star ratings under the federal government’s Nationwide House Energy Rating Scheme (NatHERS). Most new houses have to meet a minimum 6-star rating. The higher the rating, the more energy-efficient the home.

Besides the star rating system, there are three other ways to meet the thermal efficiency standards, including one known as Verification Using a Reference Building (VURB),, which awards a pass or fail rather than stars. It was designed to allow houses with alternative building techniques to comply with the standards.

But some builders are using this approach to accredit houses that fall well short of the 6-star standard under the NatHERS system – a tactic that is legal under the current system.

One consulting engineering firm, Structerre, which is active in Western Australia, Queensland, Victoria and New South Wales, has advertised that it has saved builders thousands by adopting the pass/fail approach under VURB. Structerre declined to comment for this article. 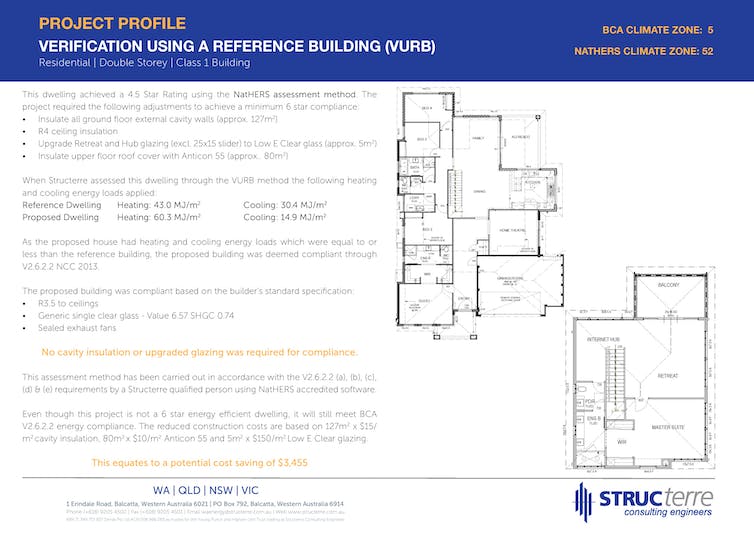 By using VURB, builders can forego installing items that would ordinarily be needed to gain a minimum 6-star rating, such as cavity insulation or upgraded glazing.

Upgrading a home from a 4.5-star rating to 6 stars can typically cost tens of thousands of dollars. It is even more expensive for double-storey homes on narrow blocks with sub-optimal orientation.

It is hard to say exactly how much higher energy bills would be in a home that falls below 6-star standard, because of the many other factors that influence bills. But major Australian house builder BGC Residential estimates that people with a 4-star or 5-star rated home could pay about 30% more than people living in a 6-star home.

A CSIRO study of more than 400 Australian houses built in the past 10 years found that higher-rated homes saved significantly on winter heating costs.

However, a study of 10 homes in Perth found significant variation in energy use between homes with the same rating.

The picture is complicated further by a phenomenon known as the takeback effect, in which some people in energy-efficient homes actually increase their energy consumption.

Michael Bartier, executive general manager of BCG Residential, one of the first companies to adopt NatHERS 6-star rating as a standard building practice, said the use of loopholes could harm the industry’s reputation and cost buyers money.

“My concern is that there are a large number of homes built in the past 12-18 months that have not achieved the NatHERS 6-star rating, without the owners’ or customers’ knowledge. These homes could be rated as low as 2.7 stars and suffering poor thermal performance, costing the owners significantly more in heating and cooling energy costs and affecting final resale value,” he said.

While universal certificates are generated for homes found to comply with NatHERS, making them easier to track, it’s hard to tell how many homes have been signed off with VURB, as recording is not mandatory for those homes.

Some industry insiders are concerned that, without public scrutiny, the use of this loophole will increase.

CSIRO, which owns the software used for NatHERS ratings, has developed a database of new homes’ energy ratings across Australia.

It currently has data for most homes built since May 2016, and is aiming to make its data available to the public. Some preliminary data are shown in the map below.

Average star rating for homes built since May 2016, in a selection of Australian climate zones. It does not show all homes, and in particular does not show homes that met compliance using the VURB pathway. Data courtesy of CSIRO.

Click on the zones to see the average star ratings.

There are more drawbacks besides the potential impact on energy bills. The National Construction Code states that home thermal efficiency standards are also important for reducing greenhouse gas emissions.

In 2013, Australia’s residential and commercial buildings were responsible for almost a quarter of the nation’s greenhouse emissions.

Several groups have warned about the use of the VURB pathway, including CSIRO, state governments, and the federal Department of the Environment and Energy. But it is unclear whether these warnings will catch the eye of home buyers.

The Australian Building Codes Board is reviewing the system (it is open for public comment until February 2018), and plans to “strengthen the technical provisions” in the 2019 version of the National Construction Code.