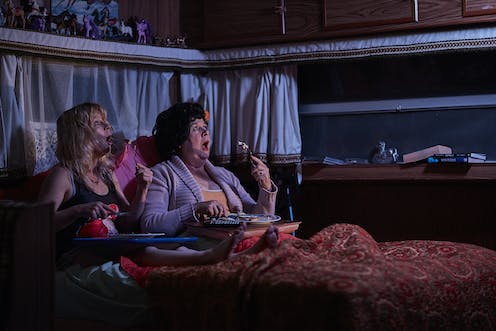 Despite its forays into dark subject matter, Caravan, staged as part of the Melbourne Festival, is a rather sweet comedy. Described as a “darkly comic look at life on the margins”, it is also a curious blend of vaudeville with faint notes of magic-realism. It delivers cheery...

Despite its forays into dark subject matter, Caravan, staged as part of the Melbourne Festival, is a rather sweet comedy. Described as a “darkly comic look at life on the margins”, it is also a curious blend of vaudeville with faint notes of magic-realism. It delivers cheery choreographed sequences set to popular music, rapid-fire comic delivery, while touching on the social realities of gender and class disparity.

The play is staged in a retro caravan, parked in the forecourt of the Malthouse Theatre. The audience looks out onto a distinctly Melbourne skyscape, adorned in the distance by the Arts Centre spire. The sprawling metropolitan horizon, with its lights and multistorey buildings, provides a contrast to the humble and squat form of the caravan where most of the action takes place.

The show follows the fractious relationship between an elderly mother and her daughter living together in a caravan. Donna (Nicci Wilks) cares for her mother Judy (Susie Dee), who lies in a double bed, diva-like, under quilted bedspreads, wearing an incongruous wig. Donna is listless as she negotiates the dreariness of her role as full-time caregiver for Judy. She administers medicines and performs unseemly labours of care, while obsessively searching for potential romantic hook-ups on Tinder.

The script is a work of collaboration drawing on the talents of writers including Angus Cerini, Patricia Cornelius, Wayne Macauley and Melissa Reeves. Over a series of dinners, each of the writers was allocated a prompt for developing the themes of the play, including “the body, death and organ donation”. Unsurprisingly, the dialogue is awash with these fleshy motifs, lending it a visceral quality, as well as a curious sensuality and warmth.

The play runs for about an hour and a half, without traditional scene breaks. Rather, a series of visual gags and stylised movement sequences provide breaks in the dialogue.

The play begins with a monologue by Donna; she appears, cigarette in mouth, having just returned from buying a glistening chunk of liver for dinner from a “stubby-fingered” butcher. She steals a moment outside to check in with her dating app. As she assesses the men on her phone, all the while swiping left, Judy’s voice pierces the night: “Fucken get in ’ere!” Donna begrudgingly abandons Tinder to tend to Judy.

Then, like a cabinet of curiosities, the wall of the caravan lowers, revealing the scene inside. Here, the set and costume design by Mag Horwell comes to life. A kitchenette, complete with cooking stove and implements, is where Donna unceremoniously fries liver; there’s an iconic table and bench seat; lace curtains adorn the windows; a shelf is littered with medication and another is adorned with a blend of kitsch ornaments. 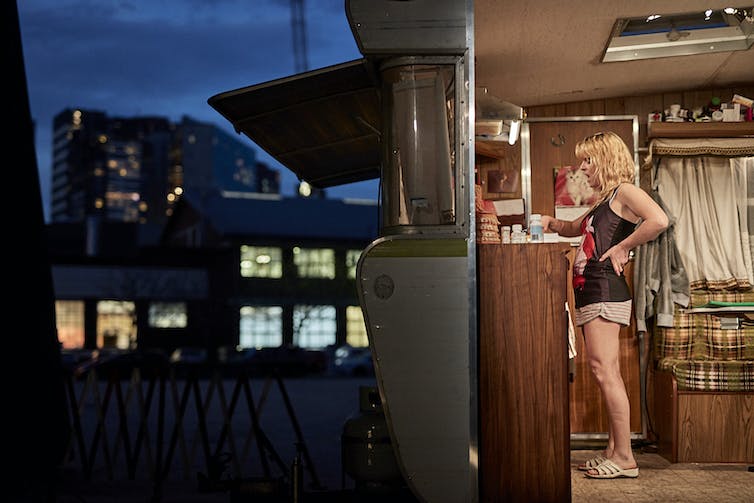 Caravan is staged in a caravan in the Malthouse Theatre’s forecourt. Tim Grey Photography

As the play progresses, the dialogue volleys back and forth between the pair, as they negotiate their disappointments and decades-long rivalry. Wilks and Dee deliver energised performances. Wilks’ speech is relentless, rapid-fire, with a distinct Australian wilt to the accent. In contrast, Dee plays on the slower, more rhythmic qualities of the script, which overall dispenses with naturalism.

Judy reveals to Donna the fraught relationship she shared with her own mother, openly stating: “I didn’t like the smell of her.” This lends the play an almost epic quality, placing Donna and Judy’s relationship in a longer historical and narrative arc, in which daughters stage a perennial struggle to escape their domineering mothers.

As she lies in bed, Judy regales Donna with stories of her sexual exploits as a much younger woman, providing the audience rare glimpses into an elderly woman’s sexuality, while inspiring raucous laughter. For instance, Judy describes one lover as having had a “tongue like a hungry beaver, keeping time with my inner clock”. All the while Judy tries to hoodwink Donna into giving her a glass of red, which is strictly against doctor’s orders.

Each scene playfully delves into the pair’s psychosexual dynamic, showing the mother-daughter pair as unabashed, desiring subjects. Judy confesses to Donna, “I fucked in the forest once”, while Donna indulges in sexual fantasies about Mr Wood, her next Tinder date who, she thinks, will smell like “singed hair and animal flesh”.

At about three-quarters in, their fraught relationship finally comes to a head during a heated exchange, when Judy exclaims: “If I had my time again, I’d use a coat-hanger on you!” This prompts Donna to retaliate: “Nasty, horrible, old bags die alone!” She attempts to leave the caravan but returns to find an ailing Judy collapsed on the floor. The pathos of this scene, handled with aplomb by both Dee and Wilks, threatens to break with the play’s comedic presentation but is ultimately restored by a gag.

The play is a unique two-hander, which puts the lives of marginalised women at the centre of dramatic action. Underneath the comedic overtures, deeper issues bubble to the surface. The pair are mutually bound to each through a need for love but are also stuck with each other because of their economic disenfranchisement. However, far from being social realist, or overtly political, Caravan’s highly stylised dialogue and action have the effect of transforming ordinary, working-class life and lingo into poetry.

Caravan will be showing as part of the Melbourne Festival until October 22.