This article is part of the Democracy Futures project, a joint global initiative between The Conversation and Sydney Democracy Network. The project aims to stimulate fresh thinking about the many challenges facing democracies in the 21st century.

This piece is part of a series, After Populism, about the challenges populism poses for democracy. It comes from a talk at the Populism: What’s Next for Democracy? symposium hosted by the Institute for Governance & Policy Analysis at the University of Canberra in collaboration with Sydney Democracy Network.

It is impossible to follow the news without catching reference to the rise of populism. A once little-used term that denoted a handful of parties in otherwise unconnected political contexts, populism now seems almost definitive of a political moment in time.

It also elicits a wide range of responses from specialists. The most common reaction is a negative recoil against the emergence of forces that seem to threaten democracy. The emergence of far left and far right political forces seems redolent of the 1930s, and look where that left us.

On the other hand, there are influential figures who argue that there is nothing to be afraid of in populism. Far from it: populism represents an appeal to The People, and on this basis is not just consonant with democracy, but with any kind of politics that seeks universal appeal.

Since political parties seek power, broad, if not universal, appeal is what they crave. Populism on this account is nothing more than “the logic of politics”, assuming politics to be what is of public or collective concern. A non-populist politics is doomed to fail, or to be the preserve of groups or identities who set their face against the demos.

So populism can be defined as something menacing and threatening to democracy, but also as something redemptive, celebratory and expressive of democracy. The question is, which of these two senses is the right one? Which gets closer to the “truth” about populism?

In a famous essay on Plato’s Phaedus, Jacques Derrida explores the concept of “pharmakon” as an example of a term with apparently self-contradictory meanings.

Pharmakon, from which we derive the terms pharmacology and pharmacy, denotes a toxic substance used to make someone better, but which might also kill them.

Pharmakon is in this sense both poison and cure. It cannot be one or the other; it is both. Whether it is one or the other depends on dosage, context, receptivity of the body to the toxin, and so forth. In short, pharmakon expresses contingency and possibility, both life and death.

Now think back to what we have just been discussing in relation to populism. Do we really want to say that populism is always and everywhere a threat to democracy, something to be opposed or fearful of? Are there not moments or contexts where an appeal to the people versus corrupt or decadent elites might make sense in terms of saving democracy – from itself?

By contrast, are we really convinced that the appeal to the people is a necessary and constructive feature of politics, indeed something that we cannot avoid? Don’t we want to say, rather, that whether this appeal to the people versus the elites is to be celebrated or not depends on the position of the individual observer or participant in a vortex of political choices? 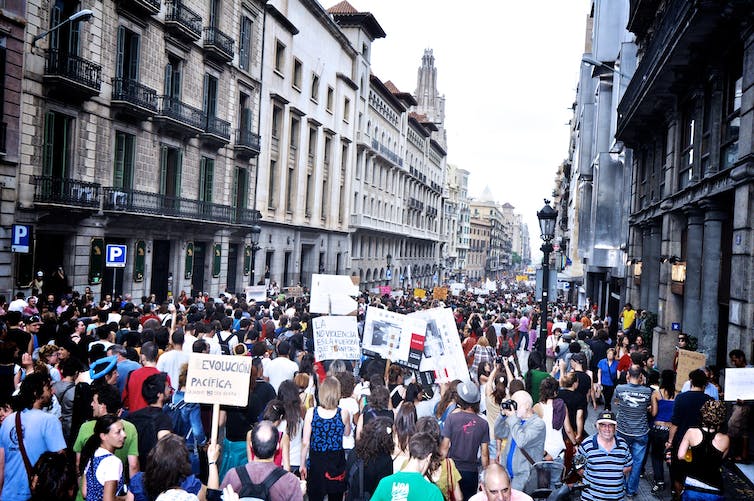 Though Podemos’s populist message resonated with many on the streets, it has led the party into trouble. Paolo Di Tommaso/flickr

The emergence of a populist discourse in Spain accompanied a near-complete collapse in faith in the political elites. Millions of people flooded the streets in 2011 to protest against those who were inflicting austerity from the luxury of the presidential palace.

It was a manoeuvre pitched in the midst of well-documented examples of corruption, clientelism and cronyism – not to mention the extraordinary waste of public money on useless megaprojects that seemed to rub the noses of ordinary people in the dirt of their own powerlessness.

So the emergence of the populist Podemos and its potent message of “yes we [the people] can” chimed. However, it sounded a false note for others: fear of “charisma”, of leader-centred politics, and thus of the snuffing out and rendering irrelevant of the street protesters and micro-initiatives that had fostered the conditions for its creation in the first place.

The celebration of populism “from below” is mixed with an anticipation of problems to come – not least the cutting off of “the below” itself in a fanfare of triumphant, mediatised politics.

Consider too the emergence of France’s Emmanuel Macron, centrist saviour of the European project. Through clever semantics he countered the populist charge of Marine Le Pen with a neat populist manoeuvre.

Le Pen was the “parasite” living off the system she criticised, not he. He was the political outsider who had given up on the elites; she was the product of the elites – or least one part of it. 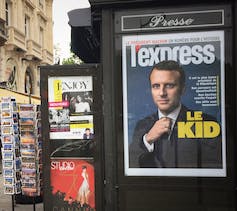 Macron was the figure untainted by association with the failed political order, while Le Pen reeked of stale battles and a lost France. He embodied France’s future, she its dark and gloomy past. Not a battle royale but a bataille Republican of Pharmaka.

But isn’t all this talk of outsiders and elites a little iffy stemming from someone who made millions as a banker with Rothschild? How long before this outsider rhetoric collides with the reality of budget cuts and labour market reforms?

Accepting the ambivalence of populism and pharmakon, so what? Why does it matter what kind of spin we put on the term?

Contemporary politics has by and large become a politics of reconstituting democracy after the collapse of the narrative of representation under which we have been living for at least two centuries. We have become less inclined to believe in the benign intentions of our representatives, of politicians.

We have become populists in the sense of seeing elites as disconnected or uncoupled from the people, and thus ourselves.

We’re not quite sure what the “cure” entails: the election of the outsider (Donald Trump, Jeremy Corbyn, Geert Wilders) or the assumption of some non- or post-representative strategy that will reduce, if not eliminate, the distance between the people and political power (deliberative assemblies, wikidemocracy, liquid democracy).

We’re not sure if the cure, the exuberant outsider, will “work” and make life better, make America “great”, or whether it will kill politics stone dead.

We’re not sure if there is life after representative democracy, or whether some alternative model will work better or fail, leaving our world in tatters. But we are inclined to experimentation as the certainties that have sustained our politics for the past two centuries wither.

We watch the toxin descend with an admixture of hope and fear – populism: democracy’s pharmakon.

Authors: Simon Tormey, Professor of Political Theory and Head of the School of Social and Political Sciences, University of Sydney