Tiny houses are now so popular that someone was charged with stealing one last week. A social media campaign tracked its journey from Canberra to Hervey Bay. My research to date has found a marked increase in people who want their own tiny house, particularly among older women.

This tiny house was tracked across the country last week.

Based on earlier research, I argued that tiny houses could be part of a solution to the perennial and wicked problem of unaffordable housing, as well as improving urban density and the environmental sustainability of housing. In 2015, very few people had actually built one.

A repeat of the 2015 survey has found a marked increase in people building or wanting to build a tiny house. Some 20% of current respondents (173 to date, but the survey is ongoing) had built or were building a tiny house. Another 61% intended to build one.

Most of these tiny houses were fully mobile, partly mobile (that is, a container house) or on skids. Only 20% were intended to be permanent. Interest was equally divided between urban and rural residential areas.

There was a statistically significant relationship between preferred location and type of tiny house. Most of those preferring rural locations wished to build a permanent or container-type tiny house. Those wanting urban locations preferred mobile tiny houses. This is likely the result of urban land costs, although more than 50% of survey respondents stated that they would prefer to build on their own land.

Demographically, interest in tiny houses is biased towards older women. The majority of respondents were women over 50.

Although this could be a result of sampling bias (more women than men tend to complete surveys), it also could reflect other research showing that single women over 50 are the fastest-growing demographic for homelessness in Australia. This is due to relationship break-ups, employer bias against older women, and lack of superannuation savings.

Tiny houses are an ideal housing form for single women, as they could site one on property belonging to an adult child or other relative, yet maintain their independence and privacy. As one respondent said:

I am 53 and am finding it hard to get employment, so this reduces the pressure on me by paying less rent in a tiny house. Hopefully will free me up to have a better lifestyle, health and fitness and time…

A tiny house with a small fenced-off yard for my small dogs is really all I need. I’d be happy to live in a TH community with communal gardens etc. This is my only viable option to own a home and homelessness in the future is a real fear.

As with the previous survey, the drivers for tiny house living were predominantly economic, then environmental.

In a possible reflection of the strong demand for urban living, the most important driver was “too expensive property in preferred area”. Then came: wanting to reduce overall debt, not wanting a mortgage, wishing to downsize, and housing too expensive in general.

This respondent summed up the economic drivers:

I just want to own my home. I have been a renter for 30 years and long to own my own space and have more freedom to do things I love and work less.

Environmental sustainability and conscious consuming were seen as the second-most important benefits. The backlash against the McMansions of previous decades is strong:

I support the ideas of tiny houses for conscious consuming. We all consume too much land. Infrastructure and space for what we need. We then choose to fill up the spaces with more stuff and also travel further to our destinations using more fuel to get there. It’s a downward spiral, which could be contained by more sensible accommodation choices and a more thoughtful attitude towards resources.

Maintaining and building/sustaining standard stock (4 bed 2 bath) is time-consuming and soul-destroying. I own a 6-bedroom house now … the upkeep and the way it gets in the way of real relationships is something I have come to realise and do something about.

What does this mean for urban planning?

In keeping with previous research, respondents noted significant barriers, particularly inflexible planning schemes, and then the cost of land. However, these barriers were ranked much lower than the drivers – only two (planning scheme inflexibility and complexity) were given a mean score more than four (out of five).

This might indicate that local governments are becoming more open to the idea of tiny houses as an alternative to high-rises for increasing density in what is known as the “missing middle”.

Indeed, architects, consultants, planning professionals and academics collaborated on the recently released Tiny House Planning Resource for Australia 2017. It aims to assist planners, policymakers and the wider community to better understand the tiny house movement and its potential to contribute to greater choice in housing supply and diversity.

Yes, tiny houses are one, possibly extreme, end of the housing form continuum. They don’t suit all demographics, but the increasing interest shows that local governments need to seriously consider allowing tiny houses in urban areas.

They have significant potential to be a catalyst for infill development, either as tiny house villages, or by relaxing planning schemes to allow owners and tenants to situate well-designed tiny houses on suburban lots. 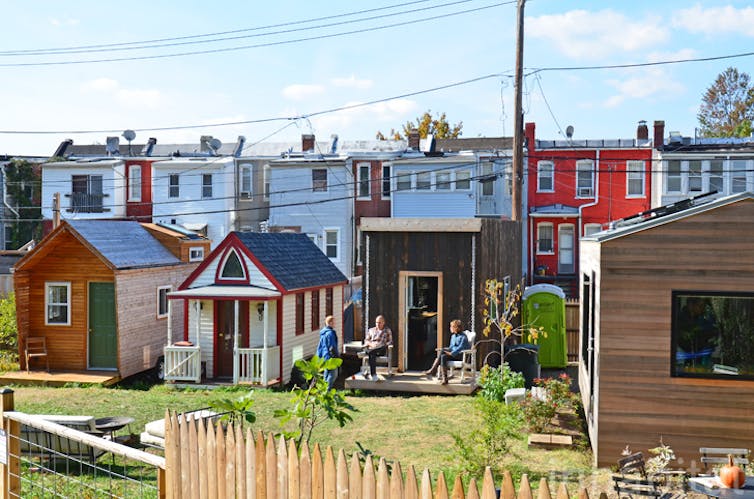 One respondent summed it up well:

Regulations need to be freed up to allow more than a small secondary dwelling on a typical suburban lot in a general residential zone. Financiers, valuers and mortgage insurers need to be coached into the benefits of small as arguably the only way to move forward in this current affordability and sustainability crisis.

The tiny house on its own freehold lot - whether in a community or Torrens title - has to be a way to enable ease of financing. This means that if a local government is serious about affordability, planning regulations need to change to enable freehold titling and increased density without having to go through costly and time-consuming development approval processes.

You can take part in the ongoing tiny house survey here.