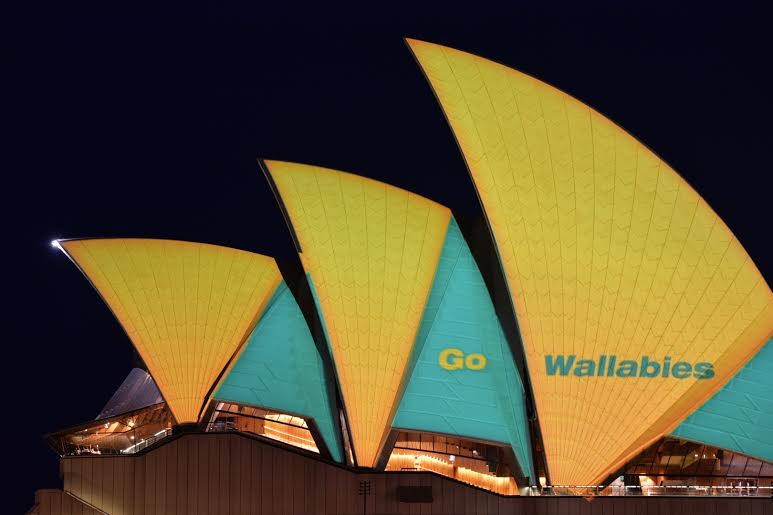 The Sydney Opera House was lit up in green and gold tonight ahead of the Rugby World Cup final between Australia and New Zealand in London.

New South Wales (NSW) Government’s Minister for Trade, Tourism and Major Events and Minister for Sport, Stuart Ayres said the whole of NSW was behind the Wallabies as they attempt to claim the World Cup for the first time since 1999.

“Sydney and NSW are turning up our support for the Wallabies as we light up the iconic Sydney Opera House to cheer the team on. I’ll be setting the alarm for Sunday morning, and wish the team the very best of luck,” Mr Ayres said.

“NSW is the home of Australian rugby, and it’s fitting that one of our most iconic buildings is dressed up to celebrate the Wallabies.

“NSW is Australia’s sporting capital, playing host to events including the Cricket World Cup, Asian Cup football, Netball World Cup, Bledisloe Cup and in 2013 the tour by the British and Irish Lions.

“From 6-7 February next year, Sydney will also host the Sydney Sevens at Allianz Stadium, with fast-paced Sevens rugby on display in the summer sunshine,” he said.

“In addition to the Sydney Sevens, Sydney will also be hosting the Bledisloe Cup for another year at ANZ Stadium. It will be a fantastic occasion, a World Cup Final replay, and like all Aussies I can’t wait to see the Wallabies emerge victorious, as we all support them this weekend at Twickenham,” Ms Chipchase said.

The Rugby World Cup final between Australia and New Zealand will kick-off at 3am on the morning of Sunday 1 November. The Sydney Opera House will be lit from 8pm-12am on Friday and Saturday night.

Tickets to the Sydney Sevens are still available, and more information can be found at www.sydneysevens.com.au