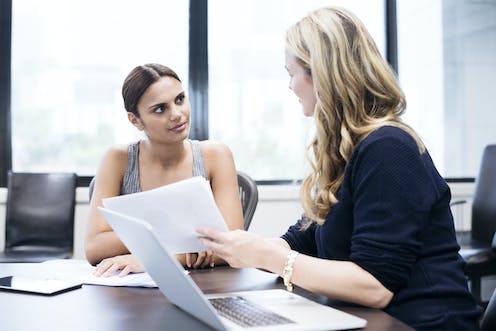 Workplaces can be hostile, overwhelming and unwelcoming places for many First Nations Peoples. My research has explored how this is the case in many organisations, including universities.

Workplaces can be hostile, overwhelming and unwelcoming places for many First Nations Peoples. My research has explored how this is the case in many organisations, including universities.

White people can react negatively when a person of colour questions or tries to change what white people consider common understandings. Due to these environments, it often feels like as academics, we’re unable to examine complicated or complex issues caused by ongoing effects of colonisation - such as racism.

It is not uncommon for First Nations academics to have complaints made about us when we discuss issues such as racism and whiteness. Because the concepts (us) make people feel “uncomfortable”.

Because of the skills First Nations academics gain through education and our positions in universities, there is additional pressure from our families and communities to solve all of the problems we set out to address. However, we have limited power.

First Nations people are often not given opportunities for promotions by the organisation they work for. If we are in leadership roles, we are undermined by white colleagues. However, when First Nations employees try to broach these issues with their employer, we are frequently ignored, framed as “difficult” or labelled a liar.

This can lead to what is called Indigenous identity strain. This is the strain Indigenous employees feel when the perception of their identity is seen as not meeting the expectations of the dominant culture in the workplace.

The consequences that come with this strain are significant:

Read more: With COVID restrictions easing, should Black professionals have to return to hostile workplaces?

Cultural loads are the additional responsibilities carried by Indigenous Peoples such as health inequities, racism, socio-economic issues and cultural responsibilities. This can also include white people expecting us to represent and be responsible for all First Nations people. This can be detrimental when certain First Nations individuals act in certain ways - it becomes representative of all us.

Comparatively, white culture seems to not have these kinds of cultural loads. Whiteness does not have a universally accepted definition, and to be white is to be invisible or a neutral presence compared to people of colour.

In addition to these cultural loads, there can be further pressures from white colleagues regarding cultural content.

It is often expected that we will:

People of colour are often expected to undertake additional responsibilities combined with their formal role. GettyImages

Read more: Racism at work: a call to anti-racist action for Australian organisations

How can whitefellas address this?

Although it is important to recognise white privilege, not getting paralysed by white guilt is paramount. White guilt is motivated by recognition of unearned privilege but blocks critical reflection because white people end up feeling they are individually to blame for all forms of racism.

However, white people must stop using “good intentions” to excuse lack of knowledge and understanding of diverse peoples’ cultures and issues.

To be an effective ally, one must go beyond being well-intentioned actions, and perceived outcomes such as recognition for their efforts. What is critical is being conscious of values such as respect, humility, and commitment.

Allies are not wanted if they only want to be performative or being viewed by others as “supportive”. Being dedicated to creating a world with justice and equity requires white people take accountability and responsibility. This includes self education about First Nations issues and learning to sit with the discomfort of uncomfortable truths.

If First Nations Peoples and People of Colour are to have additional responsibilities or tasks in the workplace, we should be paid and compensated accordingly for the additional workload. Alternatively, there should be a designated person for that kind of work. In addition, more First Nations People must to be provided pathways to leadership roles .

To do this, organisations need to draw on the abilities, knowledges, governance and leadership of First Nations Peoples without exploitation.

This requires commitment to social and structural change and investing in diversity and inclusion. It is vital for organisations to de-centre whiteness and be more accessible for the cultural needs of First Nations Peoples.