As well as the whole House of Representatives, 40 of the 76 Senate seats will be up for election on May 21. There are 12 senators per state and two per territory. At half-Senate elections, six senators for each state and the four territory senators are up for election. Unless there is a double dissolution, state senators have six-year terms and... 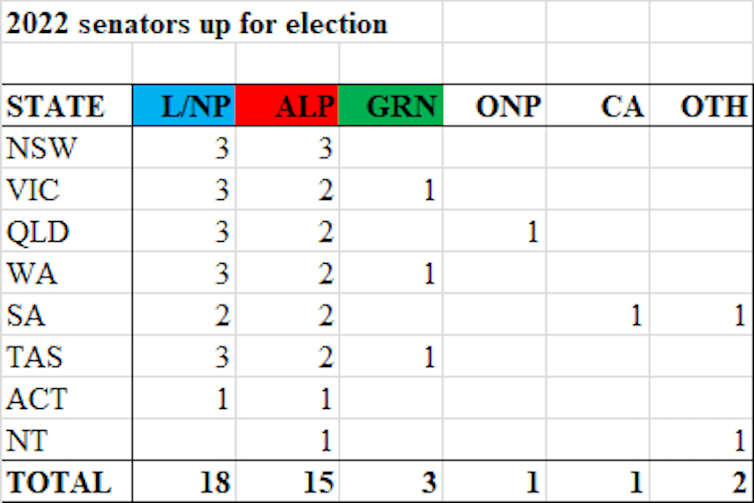 The Senate is massively malapportioned, with Tasmania having the same number of senators as New South Wales, despite the latter’s population being more than 15 times greater. This was the price for the smaller states joining the Australian federation in 1901.

In state upper houses like NSW and South Australia, voters are only told to give a first preference above the line, although they can give more preferences. This leads to a larger number of exhausted votes than in the federal Senate. There, candidates will need about 0.8 quotas after preferences to win, while it’s only about 0.5 quotas with optional preferences.

Read more: Labor's lead steady in Newspoll and gains in Resolve; how the polls moved during past campaigns

Impact of changes to electoral legislation

Last year, Labor and the Coalition combined to change legislation to require 1,500 members to register a party, up from the current 500, and to disallow parties with similar names to older parties. Owing to the first change, there will be less cluttering on Senate ballot papers, with most states seeing a fall in the number of above-the-line boxes from 2019.

The second change was aimed at the Liberal Democrats and the Democratic Labour Party. The DLP was deregistered under the 1,500 rule – see analyst Kevin Bonham – but the Liberal Democrats found a loophole that enabled them to keep their name for this election, as ABC election analyst Antony Green has explained.

However, Western Australia is the only state where the Liberal Democrats have drawn a box far enough to the left of the Liberals for name confusion to be an issue.

The Coalition currently holds 35 of the 76 Senate seats, Labor 26, the Greens nine, One Nation two, Centre Alliance one and Jacqui Lambie one. The remaining two seats are filled by party defectors: Rex Patrick from Centre Alliance and Sam McMahon, who quit the Northern Territory Country Liberal Party and is now a Liberal Democrat.

During the last term, the Coalition regained a seat from a defector when Cory Bernardi resigned from the Senate.

The table below shows the 2022 seats up for election in each state and territory.

Senate seats up for election in 2022.

The Coalition will be defending three senators in all states except SA, and that makes them vulnerable if Labor wins the election. Senate results are highly correlated with lower house results, although the major parties’ primary votes are typically a little lower in the Senate.

For Labor and the Greens combined to gain control, they would need to gain four seats in total at this election. The Coalition and One Nation combined could gain control via a two-seat gain, with the Coalition virtually certain to gain from a defector.

For this analysis, I will use the Poll Bludger’s BludgerTrack for each mainland state. For translating poll percentages into quotas, one quota is 14.3%, two quotas are 28.6% and three quotas are 42.9%. It’s a pity Newspoll hasn’t yet published state data from its five polls taken since late March.

BludgerTrack is an analysis of lower house polling, and most data were taken before it was known that One Nation would contest 149 of the 151 House of Representatives seats. One Nation will be higher in the Senate, particularly in NSW, Victoria and SA.

In Victoria, Labor has 38.1%, the Coalition 35.5%, the Greens 12.8% and One Nation 1.8%. I think this would be close between Labor and the Coalition for the final seat, so it would be either be three Coalition, two Labor, one Green; or three Labor, two Coalition, one Green.

In Queensland, the Coalition has 38.2%, Labor 31.9%, the Greens 14.0% and One Nation 6.9%. One Nation will be boosted in the Senate by Pauline Hanson’s candidacy. This result would be a Greens gain from the Coalition, with two Coalition, two Labor, one Green and one One Nation elected. But Labor has historically underperformed its polling in Queensland.

In WA, Labor has 38.7%, the Coalition 37.3%, the Greens 12.2% and One Nation 5.3%. One Nation and UAP preferences would likely lift the Coalition above Labor for a status quo result of three Coalition, two Labor, one Green.

In SA, Labor has 43.6%, the Coalition 39.3%, the Greens 10.5% and One Nation 2.2%. Nick Xenophon, a former independent SA senator, is contesting this election. But Bonham reported a Greens-commissioned SA Senate uComms poll gave Xenophon just 0.37 quotas – not enough to threaten.

Read more: Will a continuing education divide eventually favour Labor electorally due to our big cities?

However, Xenophon is likely to draw votes from both major parties, allowing the Greens to win a seat. This is likely a Labor and Green gain from the two Centre Alliance (one former), with a SA result of three Labor, two Coalition, one Green.

Tasmania’s sub-samples are too small for a separate analysis, but it was easily the most Labor-leaning state at the 2019 election, with Labor winning by 56-44, compared with a national result of 51.5-48.5 to the Coalition.

If Labor and the Greens win a combined 4-2 split in any state, it’s likely to be in Tasmania. Lambie will not be up for election this year, but she’s trying to win a second seat for her party.

Bonham reported polling that would give independent ACT Senate candidate David Pocock a chance of defeating the Liberals’ Zed Seselja. But there’s been speculation at past elections that the Liberals could lose this seat, and it hasn’t happened yet.

In the NT, the CLP is virtually certain to regain its Senate seat from defector McMahon.

Read more: As the election campaign begins, what do the polls say, and can we trust them this time?