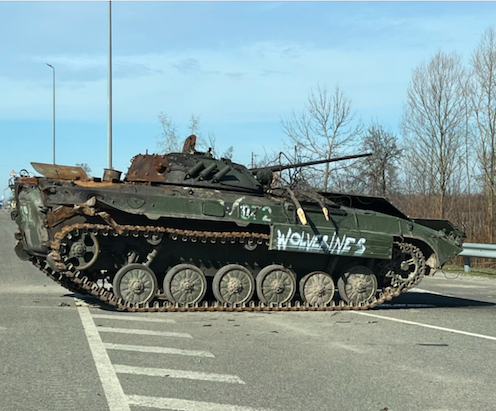 When images from Ukraine of abandoned Russian tanks tagged with the word “Wolverines” circulated in early April, movie buffs got it right away: Ukrainian fighters were consciously referencing the cult 1984 film Red Dawn.

Released at the apex of the Cold War, it chronicles a fictional Soviet invasion of the US, in which a group of teenagers – the Wolverines – mount a guerilla resistance against the might of the Soviet military.

The tagged tanks weren’t the first instance of Red Dawn being invoked over Ukraine. Early in the war, for example, some Western commentators compared the Ukrainian resistance to the Wolverines. And, more recently, dozens of Red Dawn-inspired memes have circulated on the internet.

One study showed the movie itself had seen a 500% surge in popularity on video-on-demand platforms globally since late February. When a 1980s action movie starring the likes of Patrick Swayze, Charlie Sheen and Jennifer Grey resonates this much with contemporary audiences, something is clearly going on.

Produced by MGM during the height of Ronald Reagan’s presidency, Red Dawn captured contemporary US anxiety about communist military might. MGM wanted to capitalise on American protests against the Soviet invasion of Afghanistan and ride a wave of patriotic sentiment generated by the 1984 Los Angeles Olympics.

The studio enlisted one of the most conservative American directors of the era, John Milius. At the time of its release, the Guinness Book of Records rated Red Dawn the most violent film ever made, featuring more than two violent acts per minute. But with a PG-13 rating, it proved a commercial success, grossing nearly US$40 million worldwide.

Read more: War movies are big earners. What does that say about us?

Not everyone was enthusiastic, however, with liberal critics attacking the explicit jingoism, violence and anti-communist rhetoric of the film. As the New York Times’ Janet Maslin wrote:

To any snivelling lily-livers who suppose that John Milius […] already reached the pinnacle of movie-making machismo, a warning: Mr. Milius’s “Red Dawn” is more rip-roaring than anything he has done before. Here is Mr. Milius at his most alarming, delivering a rootin’-tootin’ scenario for World War III.

Elsewhere, media scholar Douglas Kellner argued Red Dawn was an effort to reclaim for the political right the heroic figure of the revolutionary freedom fighter from 1960s leftist mythology. He saw the film as an attempt to legitimise US-backed anti-communist insurgencies in Afghanistan and Nicaragua.

Red Dawn-inspired memes have circulated since the beginning of the Russia-Ukraine war. SOsoDEFF

Such readings of Red Dawn fail to account for the ideological complexity of the film, however. Despite Milius’s radical conservatism, it would be unfair to label him as merely in thrall to the American military.

Along with George Lucas, Francis Ford Coppola and Martin Scorsese, Milius was a pioneer of the “New Hollywood” period in American film history from the mid-1960s to the early 1980s, characterised by an anti-establishment, formally innovative approach to film making.

During this time Milius achieved international fame as the screenwriter of Apocalypse Now (for which he also received an Oscar nomination), and as director of The Wind and the Lion (1975) and Conan the Barbarian (1982).

Unlike MGM, which wanted an unambiguously patriotic and anti-communist film, Milius was more interested in the existentialist aspect of the story, particularly the idea of fighting against all odds:

I took a lot of stuff from French and Russian resistance stories – in particular that they are not going to make a big difference, but the fact that they fought and died makes a symbolic difference.

Read more: The Cold War, modern Ukraine and the spread of democracy in the former Soviet bloc countries

Milius claimed the depiction of extreme violence was necessary to convey the brutality of an imaginary global conflict: “You see the tremendous cost of everything. Nobody comes out of it whole or unscarred.”

In fact, the film occasionally displays a subtle irony, blurring the ideological line between Americans and communists. A sequence depicting special Soviet forces entering the Wolverines’ home town, for instance, is a clear reference to The Battle of Algiers, a quintessentially anti-imperialist film in which French paratroopers are sent to fight anti-colonial militants. The film’s anti-communist credentials are further undercut by the celebration of both the Wolverines’ anti-imperialist values and the daring of some of the invaders. Furthermore, both sides commit brutal acts of violence, with the difference between them increasingly indistinct. When the Wolverines prepare to execute a prisoner of war, one teenage guerilla asks, “What’s the difference between us and them?” To which the leader’s only response is, “We live here.” A 2012 remake of Red Dawn failed to fire at the box office.A lasting influence Milius often claimed the perceived anti-communism of Red Dawn gained him the hostility of what he regarded as a mainly left-wing Hollywood culture, and eventually contributed to the decline of his film-making career. With time, however, the film acquired cult status and its title became synonymous with the threat of foreign invasion. The US mission to capture toppled Iraqi dictator Saddam Hussein was dubbed Operation Red Dawn. “I think all of us in the military have seen Red Dawn,” said Captain Geoffrey McMurray, who chose the name. More recently, TV shows Stranger Things and South Park have payed homage to Milius’s film, and its influence extends to music and video games. Red Dawn’s vast following even motivated a 2012 remake, about an implausible North Korean attempt to invade the US, which failed to replicate the success of the original. As its adoption by Ukrainian fighters shows, however, Milius’s third world war fantasy has retained a unique place in the collective imagination. Nearly 40 years on, Red Dawn’s stark depiction of the brutality of contemporary warfare resonates still. Authors: Alfio Leotta, Senior Lecturer, Te Herenga Waka — Victoria University of Wellington