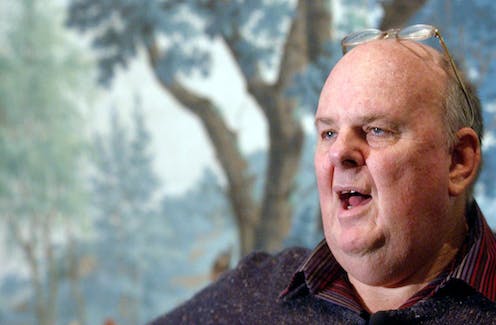 There are so many strange serendipities, and antipathies, forged across Les Murray’s work, verbal, historical and spiritual. In Continuous Creation also, Murray’s last, posthumous book (published almost three years after he died in a nursing home in Taree) these counterpoints and challenges await readers, mostly in gentle forms.

There is the sometimes visceral dissecting and reforming of contradictions; the verbal joy in paradox and pun; the delicacy co-existing with the broad vernacular; the hallelujah with the rage.

The past is imagined as “a receding star” before which the poet submits, waiting, in a place where “flesh tells what mind forgets”.

Wounds do return, and it seems necessary for the poet to wait and resurrect the injuries, “all the strappy wars/you aren’t forgiven for … waiting for the past/and the receding star/burns through flesh afresh.” Is this a victory, this recovering of the past and its wounds? It gives history and memory a stringency. Differently, the title poem Continuous Creation, invokes not the pricks of history but the ongoing, the seamless, the fluid, adopting a humble stance before the rigors of time and mortality: We bring nothing into this world except our gradual abilityto create it, out of all that vanishes and all that will outlast us. This poem reveals, delicately, gnomically, the ontological paradox of human knowledge: an understanding of human finiteness nesting at the very heart of creative presence and power. In Murray’s verse, this does not equate with Samuel Beckett’s black humour in Waiting for Godot: “Astride of a grave and a difficult birth, the grave-digger puts on the forceps”. Rather, Murray’s poetry is Blakean, capturing angelic loveliness at the crux of the earthly and earthy. He sees Earth, with its Crepe myrtles from China branch heavy with mauve and rain,black waterfowl moving ghostlyin grass to the scarlet of their brows… (Break of Autumn) This is the Murray even Murray-sceptics admire: attentive, synthesising (“mauve and rain”), delicately detailed describer of the earth, someone who has lived and written for so long in place, in the country, someone who intimately celebrates, again and again, invoking “continuous creation”. The poise of this alliteration! The active agency of the natural world. For Murray, the deficits of human life – its cruelties, bodily agonies, feuds and hatreds, so powerfully probed and catalogued in earlier poetry – can also be, late in life, sites for play, wit and experiment. The big man extracting himself from a small car (Metal Birth) is bizarrely funny and rhythmically spry: …He thendips his face from underthe dash, up into view,grinning at the end of an eclipseand writhes upright, balancing, complete. There’s slapstick here, a vaudevillian verve in that grinning. But the “big man leaving a small car” also “writhes”. We are reminded, just briefly, that a poem like this is also built on – made possible by - so many younger Murray poems about his fatness, his being bullied, his self-diminishments, poem and man bound painfully together.

Murray meeting Queen Elizabeth II in 1999. Fiona Hanson/AAP Read more: Vale Les Murray, a witty, anti-authoritarian, national poet who spoke to the world Some of these poems Murray was working on when he died, others are new work discovered among his scrapbooks and files. In this posthumous collection we are presented with another kind of contrapuntal Murray motion too. The imagination that can capture “black waterfowl moving ghostly/in grass to the scarlet of their brows” can also soar above ground level, can look down with the hauteur of the cultural warrior, the enraged preacher: … This is the culture: no history but the Allied,nothing strange. No poetry. All’s preserved slow TV selling no local memoirs,no spirit, no religion,no theory, little foreign except tourist guides,no languages at all only ever middlebrow, the culture of habitual (Half-price hardback). If you were being cruel you might refocus the glare of cultural hauteur in those tight, little lines back on the speaker/poet here: his habitually elitist generalising (“This is the culture”), his promotion of strangeness and difference, even as he speaks comfortably from his many years as the “Bard of Bunyah”. His repeated moan is that poetry has been dethroned - yet here he is, writing poetry, using it to speak to the (deaf?) nation, recognised internationally, holding up his T.S. Eliot Poetry Prize, his Queen’s Gold Medal for poetry, his more than 30 volumes of poetry. In a 2003 Guardian review, poet Peter Porter wrote of Murray’s polemicising: A skewer of polemic runs through his work. His brilliant manipulation of language, his ability to turn words into installations of reality, is often forced to hang on an embarrassing moral sharpness. The parts we love – the Donne-like baroque – live side by side with sentiments we don’t: his increasingly automatic opposition to liberalism and intellectuality. It’s curious how Porter’s review assumes an audience which naturally agrees with the reviewer while blushing at Murray’s “embarrassing moral sharpness”. One could imagine the gruff (perhaps even gleeful) dismissal by Murray, if and when he had encountered Porter’s argument. Being strange and out of step was pretty much Murray’s métier. Or at least one strain of it. It is what, in part, fuels Murray’s linguistic play, his twisting and refashioning of words and rhymes and images into strangeness, and at other times into the deeply familiar. Australian English has never been treated more cavalierly, but also more reverently. J.M. Coetzee, in a marvellously balanced 2011 essay, The angry genius of Les Murray refused to buy into what he calls the “myth” of Murray the lonely outsider: The time has perhaps come for Les Murray to let go of old grudges. Now in his seventies, he has received many public honors and is widely acknowledged to be the leading Australian poet of his generation. His poems are “taught” in schools and universities; scholars write learned articles about them. He claims that he is read more abroad than at home. This may or may not be so. But even if it were true, he would not be the first writer to suffer such a fate; and it’s a better fate than not being read at all. If there are a handful of purists who for political reasons will have nothing to do with him or his works, so much the worse for them — the loss is theirs. These words have a melancholy resonance now, in the face of Murray’s death, aged 80, on April 29, 2019. We won’t hear, afresh, Murray’s strident, passionate rallying cries, whether we agreed with them or not. Yes, Les Murray overstepped. He was an idiosyncratic ideological warrior. He wasn’t Aboriginal, but earlier on was accused of appropriating Aboriginal identity (see Ben Etherington, The Living and the Undead). He could be fiercely oppositional - to city dwellers, feminists, academics, secular society. He was a deeply religious man in what he felt was an irreligious, unpoetic, habitual culture. From his quiet, sustaining home in rural NSW, and in his refusal to enter the digital world, Les Murray probably did not see the many ways in which Australia was changing. But he did create “out of all that vanishes/and all that will outlast us” a linguistically teeming, ludic, spiritually provoking and mesmerising body of poetry, to which we are privileged to have access. Coetzee is the kind of critical reader (let alone Nobel Prize winning novelist) Murray (and all authors) deserves. He may not agree with all (or any) of Murray’s politics, or his theology, and he’s not alone in that, but Coetzee knows what a fine, passionate, inventive poet Les Murray was and is. Continuous Creation: Last Poems offers a poet’s gentle, gracious bow of farewell, and just a few barbs with which to leave us. Authors: Lyn McCredden, Personal Chair, Literary Studies, Deakin University