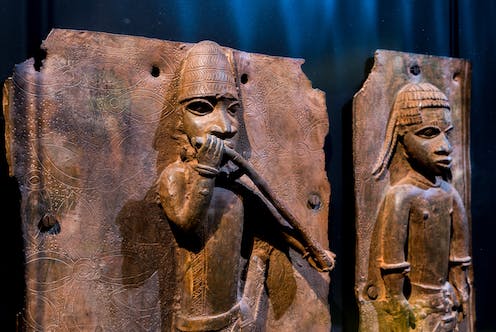 The Southland town of Gore is best known for its giant statue of a brown trout and the Golden Guitars country music festival. But the town’s Eastern Southland Gallery (ESG) also hosts one of the country’s most remarkable and eclectic art collections – and a connection to one of the art world’s enduring controversies.

Amassed by John Money, a New Zealand psychologist who lived and worked in the US, the collection includes works by notable New Zealand artists Rita Angus and Theo Schoon, and the Baltimore artist Lowell Nesbitt. (Rich examples of Ralph Hotere’s works, donated by the artist, supplement the Money collection.)

Schoon’s posthumous reputation is now mired in controversy for his despoiling of Māori petroglyphs and his use of Indigenous carving techniques.

But it’s the gallery’s examples of Benin bronze heads that appear to bring sleepy Gore into the centre of one of the hottest art world debates – the acquisition by force of Indigenous artworks during the colonial period.

New Zealand-born psychologist John Money (pictured in the 1980s) amassed his art collection in the US. GettyImages

The Kingdom of Benin, situated in Edo State in modern Nigeria, flourished for six centuries from 1200 CE. Benin City was famous for its massive protective walls and the remarkable artistic practices that flourished behind them. As the National Geographic library explains:

Artists of the Benin Kingdom were well known for working in many materials, particularly brass, wood, and ivory. They were famous for their bas-relief sculptures, particularly plaques, and life-size head sculptures. The plaques typically portrayed historical events, and the heads were often naturalistic and life size. Artisans also carved many different ivory objects, including masks and, for their European trade partners, salt cellars.

Britain was keen to include the kingdom in its sphere of control, and in 1897 took the opportunity of the murder of some European traders to annex the territory and sack Benin City. Countless artefacts were seized as punitive compensation, and eventually included in public collections, notably in London and Berlin, but widely around the world.

The Brooklyn Museum, for example, has the largest collection of African art in the US. It includes a Benin sculpture of a horn blower, thought to have been cast in the 16th century in copper alloy and iron.

The museum does not – and almost certainly cannot – provide the full history of ownership of the sculpture. The bulk of its African collection was bought in 1922 from dealers in Brussels, London and Paris.

Benin bronze sculptures on display in the 2021 ‘Where Is Africa’ exhibition in Stuttgart, Germany. GettyImages

This vagueness about provenance is common. Nevertheless, the distinctive skill of the Benin artists was such that their work is easily identifiable. We also know that any Benin bronze in a Western collection is tainted by the possibility it came onto the market as a result of the sacking of Benin City.

New Zealand’s Canterbury Museum has the largest collection of Benin artworks in Australasia. Unlike other collections, the museum’s curators have constructed a clear narrative of the provenance of the artworks. According to the museum records:

All but one of the pieces of Benin art were acquired during the directorship of Canterbury Museum by Captain Frederick Wollaston Hutton around the turn of the 20th century.

While Hutton bought the items, they most likely became available to the market as a result of the sacking of Benin City. Ironically, Canterbury Museum’s careful research is likely to facilitate any repatriation claim.

Because of Māori experience of colonial plunder, especially the trade in mokomokai, people of Aotearoa New Zealand should be particularly attuned to the desire of previously colonised peoples to regain agency over their cultural artefacts.

Perhaps, in an ideal world, Western collections would repatriate all their Benin artworks. They would then be studied and admired in the place they were created, particularly by local people, but also by academics and gallery goers from around the world.

That may not be likely any time soon, but the Canterbury Museum will eventually need to come to terms with growing demand for the return of plundered artworks, even if its items were acquired for value and in good faith from intermediaries under the usual circumstances of the time.

An Edo Museum of West African Art is planned for Benin City, which would house the region’s returned art. Several major Western collections have already agreed to repatriate or lend their bronzes and other works. However, the museum has not yet been completed and may never meet the architect’s vision.

While the local people’s spiritual attachment to their cultural treasures is likely to prevent returned artefacts being simply recycled through the black market, they are unlikely to receive the same level of curatorial care as institutions like Canterbury Museum may provide. As Nigerian essayist Adewale Maja-Pearce has written:

The Kingdom of Benin no longer exists. Its legacy […] is a dismal, sewage-infested ruin in Benin City, over which Obaseki, as state governor, has the last word. The oba [king] has appealed to the federal government of Nigeria to take custody of the artefacts while he makes alternative funding arrangements, despite the fact that no administration during the last 60 years has lifted a finger to protect our cultural heritage.

Read more: We identified 39,000 Indigenous Australian objects in UK museums. Repatriation is one option, but takes time to get right

So, how does Gore’s ESG fit into this narrative? On closer investigation, all is not quite what it seems. The three display items in the Money collection were created in the Benin tradition but actually date from the 1960s. (Money engaged reputable dealers so that living artists could benefit from his purchases.)

In the penumbral light of the gallery, however, only an expert could tell the difference between ancient and modern artefacts. If the Canterbury Museum joins the international movement towards repatriation of Benin artworks, then, Gore will be the only place in the country where we will be able to appreciate in physical form the extraordinary craft of traditional Benin metalworkers.