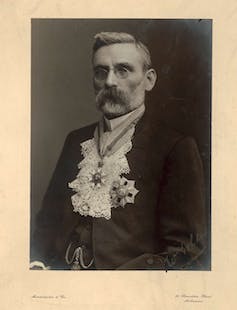 The House of Representatives today chose Andrew Wallace as the new Speaker. Wallace has been the member for the Queensland Sunshine Coast electorate of Fisher since 2016. He worked as a carpenter and barrister before entering parliament.

He is probably pleased to have this prestigious post. It pays well and comes with a nice office. His portrait will hang in the halls of parliament for posterity. On formal occasions, the speaker ranks ahead of the chief justice, the deputy prime minister and former prime ministers in the table of precedence (the official hierarchy list of key positions, used for ceremonial purposes).

But speakers pretend to be reluctantly dragged to the position. This reflects a British political tradition. Standing up to the king as parliament’s representative used to be a dangerous role.

As is usual in Australia, the new speaker comes from the government’s ranks, which means Wallace may be one of the shortest-serving speakers in Australian history if the government changes at the next election.

The role of the speaker

The speaker is the House of Representative’s “principal officer”, fulfilling “constitutional, traditional and ceremonial, statutory, procedural and administrative” functions.

Perhaps the most public role they have is to preside over the debates in the house, ensuring these are conducted according to standing orders.

The speakership is anything but a sinecure. Most Australians are well aware of televised images of the incumbent perched in the speaker’s chair at the head of the chamber during question time.

At times, the speaker strains to manage 150 clamorous parliamentarians. One speaker, Stephen Martin, was only half joking when he said his experience as a rugby league referee and high school teacher was good preparation.

Along with the Senate president, the speaker runs the parliamentary building and manages the staff.

How is the speaker chosen?

Speakers are chosen by the house itself. But in practice it is nearly always formalising a selection by the nominee’s parliamentary party.

The first speaker, Frederick Holder attempted, unsuccessfully, to embed Westminster convention that the speaker ceases to be an active member of a political party.

The first speaker was Frederick Holder. National Library of Australia/Trove

In the UK, the speaker has usually not faced opponents from other major parties at general elections.

But in the smaller Australian parliament, parties have been unwilling to give up a seat. Under the Australian model, the speaker remains a member of their party but generally adopts a less partisan role.

Speakers typically have long parliamentary experience, but few have had major further political ambitions. Several were past senior ministers for whom being parked on the backbench seemed decidedly risky. This made their appointment to the chair a face-saving precaution.

Holder was a former premier of South Australia who had been dismayed by being excluded from the federal ministry. William Watt had been acting prime minister for over a year.

Why is the speaker important?

A good speaker is a bulwark against the worst excesses of political partisanship. Truly effective ones determine the tone of the house, often skilfully exercising their personal authority with a seemingly light touch.

Most speakers have successfully balanced party loyalty with wider expectations of the office. They struck a workable compromise between partiality to their own government and keeping favouritism within bounds the opposition could tolerate.

Only a few, such as the truculent Archie Cameron in the 1950s, faced persistent opposition calls for resignation. Such qualified non-partisanship was probably helped by the speakership not usually having served as a career stepping stone.

This pragmatic, largely workable, model faces pressure from the encroachment of party politics. Although supported by deep roots in our little appreciated parliamentary history and in the wider Australian “fair go” ethos, it should never be taken for granted. It needs to be defended against the remorseless politicisation of public life.

The speaker’s role is becoming more important as politics becomes more partisan. If the people elect a “hung parliament” next year, with no party or coalition having a majority, the role will be even more crucial.

The new speaker takes over from Tony Smith, generally regarded as a very capable speaker.

He projected authority. His impartiality is reflected in his signalling that as an ex-speaker still in the chamber he will distance himself from the cut and thrust of party-driven debate. He received a standing ovation for his work.

He may have been rather blunter than many of his 29 predecessors in asserting himself. But he also showed a love of parliament – not to be underrated as a characteristic of an effective speaker.

Overall, not a bad way to exit parliamentary life. But interestingly, and perhaps worryingly, he was the first career political activist (as a former political staffer and research assistant at the Institute of Public Affairs) to ascend to the office.

Read more: Slipper saga begs the question – do we need a speaker at all?