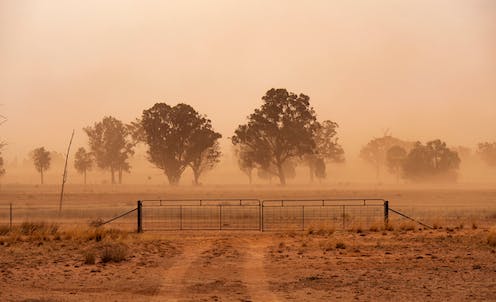 If nations make good on their latest promises to reduce emissions by 2030, the planet will warm by at least 2.7℃ this century, a report by the United Nations Environment Programme (UNEP) has found. This overshoots the crucial internationally agreed temperature rise of 1.5℃.

If nations make good on their latest promises to reduce emissions by 2030, the planet will warm by at least 2.7℃ this century, a report by the United Nations Environment Programme (UNEP) has found. This overshoots the crucial internationally agreed temperature rise of 1.5℃.

Released today, just days before the international climate change summit in Glasgow begins, UNEP’s Emissions Gap Report works out the difference between where greenhouse emissions are projected to be in 2030 and where they should be to avoid the worst climate change impacts.

The UNEP report was conducted before Australia’s new 2050 target was announced, but even with this new pledge, global pledges will undoubtedly still be short of what’s needed.

The report found global targets for net-zero emissions by mid-century could cut another 0.5℃ off global warming. While this is a big improvement, it will still see temperatures rise to 2.2℃ this century. If we don’t close the global emissions gap, what will Australia, and the rest of world, be forced to endure?

As of August 30 (the date the UNEP report reviewed to), 120 countries had made new or updated pledges and announcements to cut emissions.

But the UNEP report shows all these pledges are falling short. It finds we must take an extra 28 million tonnes of carbon dioxide equivalent off annual emissions by 2030, over what’s already promised.

The UNEP also found that while effectively delivering on net-zero targets by mid-century could mitigate the predicted temperature rise, current plans are vague, with many delaying action until after 2030, which is too late. These net-zero targets, including Australia’s, are also based on technologies that don’t exist on a large-scale yet, such as carbon capture and storage.

UNEP’s findings echo a briefing note by Australian climate scientists on Monday, who say even if global emissions reach net-zero by mid-century, there’s still a high chance temperatures will exceed 2℃ this century if we neglect to increase short-term action.

Emissions Gap Report 2021/The Conversation, CC BY-ND Did COVID-19 make a difference? While carbon emissions fell by 5-6% in 2020, this was due to widespread lockdowns and other restrictions worldwide, rather than long-lived changes in how society functions. The report notes that as restrictions ease, emissions are expected to sharply rise again this year to a level only slightly lower than in 2019. To avoid the worst climate change effects, a sustainable year-on-year reduction in carbon emissions is required. What does this mean for Australia? To date, the world has warmed by about 1.2℃ since pre-industrial levels, and we’re already experiencing significant climate change impacts and worsening extreme weather events. The western North America heatwave in late June this year saw temperature records and heat-related deaths spike. This event would have been virtually impossible without human-caused greenhouse gas emissions warming the planet. Similarly, the extreme rainfall that led to recent floods in central Europe which tore through towns in July were very likely enhanced by global warming.

Large parts of western Germany and central Europe were hit by flash floods in the night of 14 to 15 July, following days of continuous rain that destroyed buildings and swept away cars. EPA/SASCHA STEINBACH

In Australia, we’ve seen our own share of extreme events in recent years that were intensified by climate change, including record hot summers and the devastating bushfires of 2019 and 2020.

Meeting the Paris Agreement and keeping global warming below 2℃ or even 1.5℃ would still lead to continued sea level rise and worsening heatwaves on land and in our oceans.

If we fail to meet the Paris Agreement and warm the world by closer to 3℃ by 2100, then the impacts of climate change worsen considerably.

Read more: Seriously ugly: here's how Australia will look if the world heats by 3°C this century

Warm water coral reefs, including the Great Barrier Reef, are already stressed by frequent bleaching events and might be on the brink already. Most coral reefs would likely not survive sustained 1.5℃ warming, much less likely 2℃ global warming, let alone 3℃ of warming. However, limiting warming to 1.5℃ rather 2℃ makes a huge difference for many other ecosystems.

Historically hot summers, such as the Angry Summer of 2012 and 2013 and the Black Summer of 2019 and 2020, would be cooler than most Australian summers in a 2-3℃ warmer world. Parts of Sydney and Melbourne would likely see 50℃ temperatures during heatwaves.

Corals will not likely survive more than 2℃ global warming. Shutterstock

And at 2-3℃ global warming, most of the continent would experience more short bursts of extreme rainfall that causes flash flooding, Meanwhile, droughts are projected to worsen, especially in the southwest and southeast of the continent.

While Australia would experience major climate change impacts if the world fails to meet the Paris Agreement, the outlook is much worse and more devastating for less wealthy nations. Intensified heatwaves, more extreme rain events and droughts would make life harder for many, as developing nations don’t have the resources to adapt.

A big task for COP26

It is imperative we avoid the impacts of climate change that come with a 2 to 3℃ average temperature rise.

To have any chance at meeting the goals of the Paris Agreement, all countries will need to significantly increase their ambition and pledge much greater reductions in carbon emissions in Glasgow.

Wealthy, high-emitting countries should lead the way with stronger pledges, and agree on terms to finance climate mitigation and adaptation in developing countries.

Time is fast running out to avert more dangerous climate changes, and the world cannot afford a missed opportunity at COP26.

Read more: A successful COP26 is essential for Earth's future. Here's what needs to go right