Thousands of demonstrators rallied across the Serbian capital Belgrade this month, protesting the US$2.4 billion (A$3.3 billion) Jadar lithium mine proposed by global mining giant Rio Tinto. The project, Rio Tinto’s flagship renewable energy initiative, is set to become the largest lithium project in the European Union.

Lithium is a crucial... 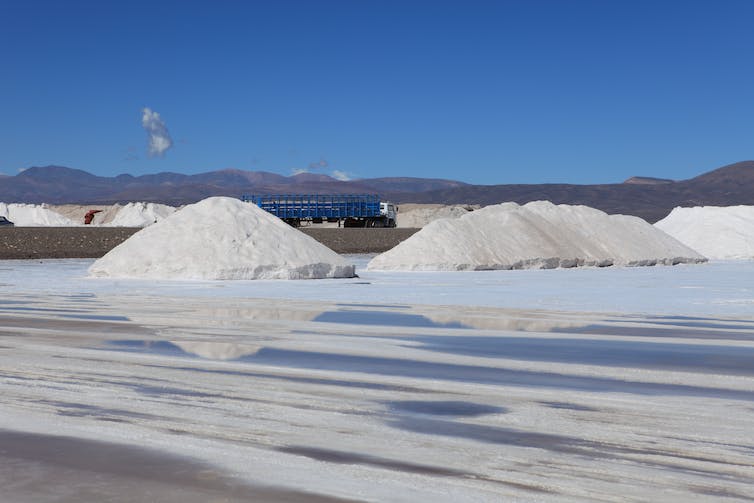 Thousands of demonstrators rallied across the Serbian capital Belgrade this month, protesting the US$2.4 billion (A$3.3 billion) Jadar lithium mine proposed by global mining giant Rio Tinto. The project, Rio Tinto’s flagship renewable energy initiative, is set to become the largest lithium project in the European Union.

Lithium is a crucial component of energy storage, both for renewable energy technologies and electric vehicles. Forecast demand has prompted efforts by companies and governments worldwide to tap into this market – a scramble dubbed the “white gold rush”.

As lithium projects have multiplied across Australia, Europe, Latin America and the US in recent years, so too have concerns over their environmental and social impacts. Communities near proposed and existing lithium mines are some of the loudest opponents. In a town near the proposed mine in Serbia, a banner reads: “No mine, yes life”.

Lithium extraction serves legitimate global environmental needs. But the industry must not ignore local social and environmental risks, and community voices must be included in decision making. The harsh lessons of mining to date need not be learned again in new places.

According to the latest estimates, the world’s resources of lithium sit at 86 million tonnes, a number that continues to grow as new deposits are found every year. Australia is the main producer of lithium, where it’s mined from hard rock called “spodumene”. The largest deposits are found in South America, where lithium is extracted from brines underneath salt flats.

Lithium mining operates beneath the salt flats in the Atacama, Chile. Shutterstock

In many cases, lithium mines are relatively new operations, yet complex and adverse social and environmental impacts have already been observed. More research and better targeted policy are needed to help understand and manage the socio-environmental impacts.

In Chile, lithium has been mined since the 1980s. It has been shown to interfere with cultural practices of local Indigenous communities, alter traditional economic livelihoods and exacerbate the fragility of surrounding ecosystems.

The Jadar lithium project is operated by Rio Sava, a subsidiary of Rio Tinto. It’s expected to become one of Serbia’s largest mines, occupying around 387 hectares, and contribute to at least 1% of Serbia’s GDP.

An environmental impact study commissioned by Rio Tinto, and obtained by Reuters, found the project would cause “irredeemable damage” to the environment, concluding the project should not go ahead. Environmental impacts are expected for any mine proposal. Yet some are manageable, so such a grave assessment in this case is not encouraging.

The extent to which a project shows best practice in mine management can depend on pressure from communities, investors and governments. Promises to adhere to all regulations are a common response from the industry.

But as we’re seeing in Chile, significant environmental damage and socio-environmental impacts can still occur within established regulations. Here, communities living on the salt flats are concerned about the effect of removing groundwater for lithium extraction on their livelihoods and surrounding ecosystems.

Communities near the Jadar Mine project hold similar concerns. They have gathered in formal organisation to reject the project and stage demonstrations. A petition against the project has gained over 130,000 signatures, and a report by the Serbian Academy of Arts and Sciences has protested the project’s approval.

People in Serbia have been protesting against pollution and the exploitation of a lithium mine in western part of the country this month. AP Photo/Darko Vojinovic

The communities fear the potential risks of air and waterborne pollution from the lithium mine, destruction of biodiversity, and the loss of land to mine infrastructure. These risks could affect the livelihoods of local landholders, farmers and residents.

Of particular concern is that the proposed locations for mine waste (tailings) are in a valley prone to flash flooding and may lead to toxic waste spills. This previously occurred in the same region when the abandoned Stolice antimony mine flooded in 2014. Rio Tinto has said it will try to mitigate this risk by converting the liquid waste into so-called “dry cakes”.

In response to this article, a Rio Tinto spokesperson said it has been working through the project requirements for 20 years, with a team of over 100 domestic experts studying the possible cumulative impacts in accordance with Serbian law, adding:

The study will consider all potential environmental effects of proposed actions and define measures to eliminate or reduce them […] including water, noise, air quality, biodiversity and cultural heritage.

Can we decarbonise without sacrifice?

The Jadar Mine project is touted for its potential to bring significant profits to both Rio Tinto and the Serbian state, while helping usher in the era of decarbonisation.

Rio Tinto plans to begin construction by 2022, “subject to receiving all relevant approvals, permits and licences and ongoing engagement”, with first saleable production expected in 2026.

But relatively fast timelines like this can sometimes be a sign of regulatory governance instability, including weak regulatory frameworks or regulatory capture (when agencies are increasingly dominated by the interests they regulate). We have seen this in Guyana, Peru and Brazil.

We have established information centres in Loznica and Brezjak and, since 2019, have hosted over 20 public open day events in these centres focusing on aspects of the project including environment studies, cultural heritage and land acquisition.

Although the Serbian government indicated that it’s prepared to hold a referendum to find out the will of citizens about the Jadar mine project, the community protests suggest the project hasn’t obtained any social license to operate.

A “social license to operate” is, despite its corporatised name, increasingly key to sustainable or responsible mining projects. It centres on ongoing acceptance by stakeholders, the public, and local communities of a company’s standard business practices. Building such trust takes time, and a social license is only a minimum requirement.

Read more: Renewable energy can save the natural world – but if we're not careful, it will also hurt it

In Argentina, for example, Indigenous communities living near the lithium mines have developed their own protocol for giving their informed consent.

These processes cannot be rushed to ensure voices are heard, rights are respected, and environmental protection is possible.

Lithium is essential for the transition away from fossil fuels, but it shouldn’t come at any cost. Shutterstock

Like many other communities negotiating proposed mine projects, local communities and residents in Serbia should not become another zone of sacrifice, shouldering the socio-environmental costs of supporting a renewable energy transition.

Lithium deposits are often seen as “new frontiers” in the places they’re discovered. Yet we must learn from historical lessons of frontier expansion, and remember that places imagined as “undiscovered” aren’t actually empty.

The people who live there must not bear the brunt of a so-called “green” future.