Australian Border Force was modelled on a similar agency created in Britain two years earlier but with a distinctive accent. Its Operation Sovereign Borders had changed the culture of military, policing and customs agencies in Australia as they were pushed out of their silos with a new shared priority: stop refugees arriving by boat. 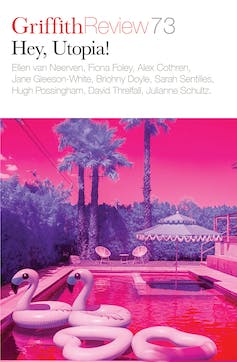 Just 14 months earlier Scott Morrison, then the Immigration Minister, had announced the formation of the new armed and uniformed force, describing it as the “reform dividend from stopping the boats”. The 70 year-old department had gained a new role: “Border Protection”. The old tags — “Multiculturalism”, “Citizenship” and “Ethnic Affairs” — were artefacts of other ages when population growth coupled with social cohesion had been the goal. The armed Border Force that had emerged out of the chrysalis of the old customs service, complete with new uniforms, ranks and insignia, on that mid-winter day was another sign of Canberra’s increasing preoccupation with security and militarisation. Fear and safety were still at the heart of the political narrative just as they had been for most of the time since 2001, when Prime Minister John Howard won an unlikely election victory by declaring over and over: “We will decide who comes to this country and the circumstances under which they come”. He liked to reassure people that Australia would still be taking more than its share of refugees, but the proportion of overseas-born residents fell over the early years of his prime ministership. After decades of multiculturalism the Australian ear was once again being attuned to new arrivals as threat. 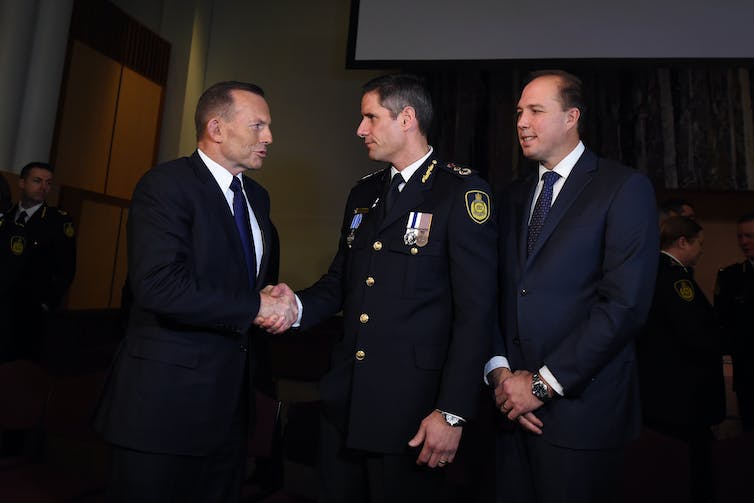 Then Prime Minister Tony Abbott (left) and Immigration Minister Peter Dutton congratulate the new Commissioner of the Australian Border Force Roman Quaedvlieg during the swearing-in ceremony at Parliament House in Canberra, Wednesday, July 1, 2015. AAP Image/Lukas Coch Read more: Cruel, costly and ineffective: Australia's offshore processing asylum seeker policy turns 9 Taking it to the streets By 2015, Australia’s proportion of overseas-born residents was nudging the all-time high of 30% reached in the 1890s, but multiculturalism was still a grubby word. Without irony, Commissioner Quaedvlieg cut to the chase, reducing the new nearly 6,000-strong agency’s role to its essence: “to protect our utopia”. Decades before, the political philosopher Isaiah Berlin had elegantly demolished the idea of utopias, suggesting they were “a fiction deliberately constructed as satires intended to shame those who control existing regimes”. A month after the launch of Border Force, its first big public exercise, Operation Fortitude, was announced. Officers were to walk the streets of Melbourne and seek proof of the right of residence of “any individual we cross paths with”. The warning was clear: If you commit border fraud you should know it’s only a matter of time before you are caught. The residents of the Melbourne branch of “our utopia” fought back with a dose of theatricality, to prove Berlin’s point, and the joint operation with the Victorian Police was abandoned in a flurry of protests and press releases. Prime Minister Abbott declared, “Nothing happened here except the issue of a poorly worded press release”. Within a couple of years, the uniformed commissioner from central casting had gone. The intent, however, remained clear. Immigration might be at an all-time high, but exclusion was still the key, and national security was at the centre of Australian public life. 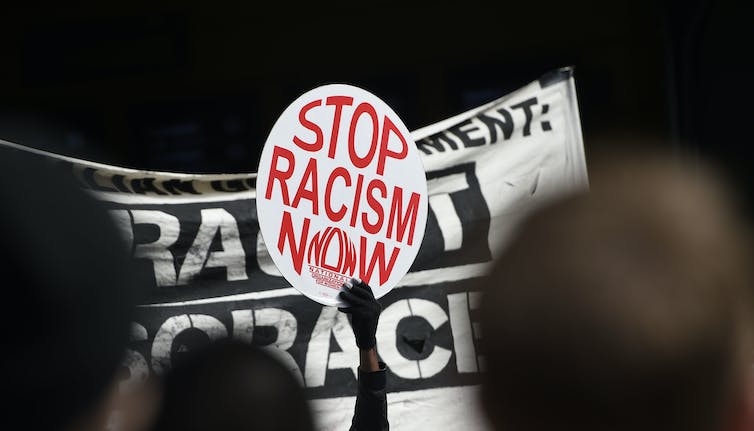 Protesters rally outside Flinders Street Station against the Australian Border Force’s Operation Fortitude plan to spot check visas in the streets of Melbourne, Friday, Aug. 28, 2015. AAP Image/Mal Fairclough Ills of the past and present Deciding who could come and the circumstances under which they could enter the country has, as we have been again reminded during COVID times, been central to the management of the Australian utopia since 1901. Again Isaiah Berlin notes the: […] idea of the perfect society is a very old dream, whether because of the ills of the present which lead men to conceive what their world would be like without them … or perhaps they are social fantasies – simple exercises in the poetical imagination. Australia at the time of Federation was awash with bad poetry by mediocre poets. So if conceiving the nation as a utopia was an exercise of the poetical imagination, it was inevitably flawed. 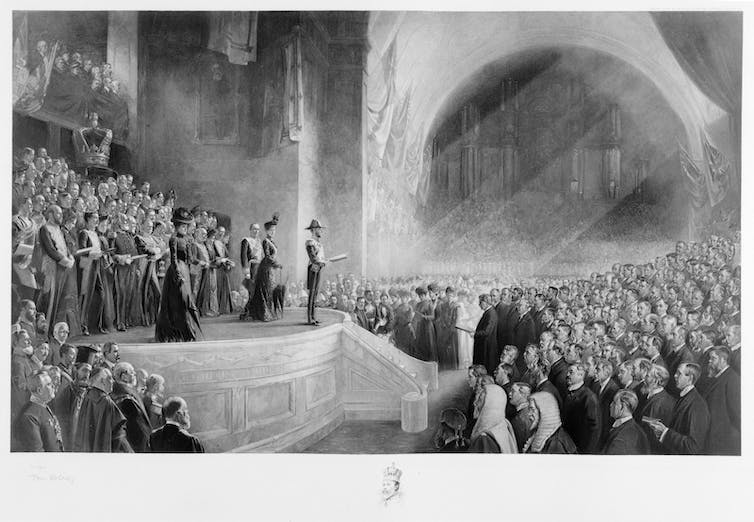 Tom Roberts’ depiction of the opening of the first Parliament of the Commonwealth of Australia May 9, 1901, By H.R.H. The Duke of Cornwall and York at Melbourne’s Exhibition Buildings. State Library of Victoria/Tom Roberts The first step towards the creation of Australia’s white utopia was brutal and relentless. It depended on the humiliation and elimination, by design and neglect, of the million First Nations people who in 1788 still called the continent home as they had done for countless generations, managed with an elaborate, ancient patchwork of languages, social relations, trade and lore. Although the Australian Constitution explicitly excluded them from the census, by the time the 3.7 million new arrivals became Australians in 1901, the First Nations population had been reduced, systematically and deliberately, to about 90,000 people. The men who debated the legislation that would shape the new nation preferred to avert their eyes. They were not, however, ignorant of what had gone before. Even in a world shaped by race there was argument, opposition and some shame. Months after Australia became legally, unequivocally white, the parliament debated whether to recognise the survivors who preceded them. The senate leader and future High Court justice Richard O’Connor argued that just as the right to vote was being extended to women — because in some states, they already had the franchise — the same principle should apply to Aboriginal people who had the right to vote in four of the former colonies. “It would be a monstrous thing, an unheard-of piece of savagery”, he declared, “to treat the Aboriginals whose land we were occupying to deprive them absolutely of any right to vote in their own country”. Not everyone agreed. The former Tasmanian premier Edward Braddon summed up the majority sentiment: We are told we have taken their country from them. But it seems a poor sort of justice to recompense those people for the loss of the country by giving them votes. This argument prevailed. White women and Maori were the only exceptions: “no aboriginal native of Australia, Asia, Africa or the Islands of the Pacific” could enrol to vote. Within its first two years, the parliament had failed two moral tests. At the heart of the Australia embraced by those who met in Melbourne in the Federation Parliament was the idea of a model society populated by men like them. Utopian dreams had played out in many ways in shaping the new nation. A decade earlier, nearly 300 colonialists sailed to Paraguay in a flawed attempt to create a more perfect, and even whiter, society called New Australia. 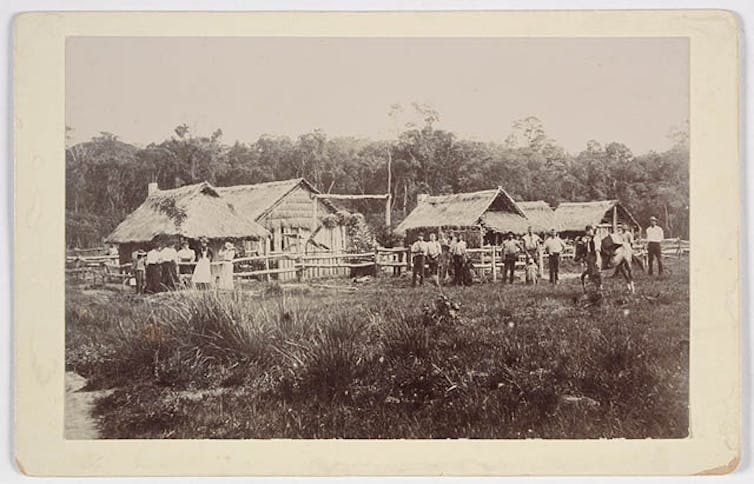 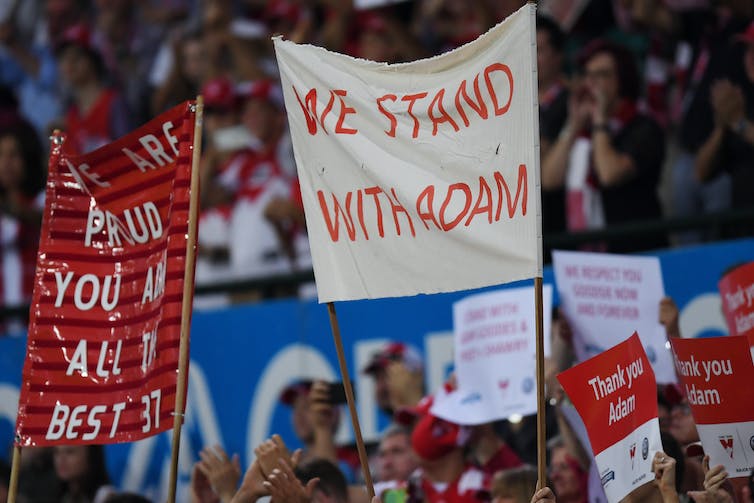 Public sentiment is at odds with that of those who are most committed to the old status quo. AAP Image/Dean Lewins When Prime Minister Julia Gillard was battered by misogynist hectoring, the message to other women was clear: don’t get ideas above your station. Almost every week a woman dies at the hands of her intimate partner, but overwhelmed police seem powerless to help. Our treatment of refugees attracts a global condemnation that is dismissed as readily today as it was in 1901. Behrouz Boochani will probably never set foot in the country he described so searingly in his much awarded No Friend but the Mountains, and despite public support, the Murugappans — the Biloela family — spent nearly three years in costly detention on Christmas Island. Yet when the government banned Australian citizens and permanent residents who happened to be in India as COVID raged from returning home under threat of fines and jail terms, the outcry was impossible to ignore. The brutality of the old ways still lives in the memory. A colleague recalled her traumatic fear, during the family’s first trip to India with their Pakistani-born father, that the White Australia policy would be reintroduced and they would be denied re-entry. It had happened to those returning to Fremantle Harbour a century earlier — and, astonishingly, again in 2021. Utopia out of step Public sentiment is at odds with that of those who are most committed to the old status quo. Survey after survey shows a populace willing to embrace change that means people are treated better. But there are few leaders willing to make the case, fearful of an imagined backlash, rather than embracing the need for big tough conversation. Transformation is left to the slow accretion of a new normal. Tens of thousands turned up at the football waving “I stand with Adam” banners years before the AFL officially apologised to Goodes. Those affronted by official treatment of refugees engage in endless protest campaigns, travel to detention centres, provide support and lobby. The Black Lives Matter movement has galvanised some of the biggest demonstrations seen in the country, despite COVID, and the calls for action on the unfinished business of the 33-old Royal Commission into Aboriginal Deaths in Custody and the other inquiries are becoming impossible to ignore. There is much to be learnt from First Nations people. Their survival and generosity is an inspiration that needs to be taken seriously and acted upon. Without righting this foundational wrong, this country will be forever stuck on a political treadmill, running but going nowhere. Art speaks volumes It is striking that one of the most important Aboriginal artists to have captivated the world came from a place called Utopia. Hers was the land of the Alyawarr people for millennia before its brief life as a cattle station. It is a place as impoverished as any of the remote settlements in northern Australia, returned to their traditional owners with only grudging support from the state. But the semi-arid country is the source of dreaming and a culture that speaks to the world when brought to life on canvas. Emily Kame Kngwarreye’s paintings are displayed in galleries, palaces and private collections around the world.

One of Australia’s most famous contemporary paintings, Earth’s Creation 1, by Emily Kame Kngwarreye. AAP Image/Emily Kame Kngwarreye They are more than great works of art. It is what Australian art always aspired to be. In the words of the influential Aboriginal scholar and advocate Marcia Langton, Emily’s paintings […] fulfil the primary historical function of Australian art by showing the settler Australian audience, caught ambiguously between old and new lands, a new way to belong in this place rather than another […] Creating a utopia, or at least an aspiration to do better, requires more imagination and courage than our current system of professional politics permits. It needs more art and better faith. Politics, like everything else, is now in thrall to corporate modes of organisation and communication. The emphasis is on the mission (to get elected) and KPIs (to deliver on promises). The headline of every corporate plan is the “vision”. It is always the hardest thing to define. But without a vision, any plan is meaningless. Our utopia needs a new vision, one not tinged by shame. The old ones have failed the test of time. This is an edited extract of Facing foundational wrongs — careful what you wish for, republished with permission from GriffithReview73: Hey Utopia!, edited by Ashley Hay.