The Murray-Darling Basin is Australia’s biggest agricultural region, producing almost 40% of the national food supply during the growing season from April to September. It’s filled with criss-crossing rivers, wetlands and lakes farmers rely on for crops, and it’s home to a range of freshwater wildlife, many of which are under threat.

But our new research found climate change since the 1990s has drastically reduced the amount of water available in the southern part of the basin.

The height of the Murrumbidgee River — the third longest in Australia and highly valued for irrigation and hydro-electricity — has dropped by about 30% during the growing season. This is a loss of approximately 300 million litres per day that would normally flow past Wagga Wagga, New South Wales — the same as six days of water use in the City of Melbourne.

The findings follow a major report the Intergovernmental Panel on Climate Change released on Monday, which found much of Australia will become more arid as the world warms. This will bring reduced river flows, mass tree deaths, more droughts and drier soils.

The viability of the basin is at stake. Continued drying and warming in Australia will cause water availability to decline even further, deepening the hurt for communities, businesses, animals and the environment. Any decisions about the competing interests of agriculture and the environment must keep these global warming impacts front of mind.

The southern Murray-Darling Basin occupies the southern half of NSW and northern Victoria. It receives most of its water from rain in the cooler months that fills dams, with any overflow spilling into the floodplains.

But our research shows rainfall in April to May has significantly decreased which, in turn, has caused the net inflows to the Murrumbidgee River catchment in the southern basin to decrease. This includes in the main dams of Burrinjuck and Blowering in the upper part of the catchment, and downstream river heights. 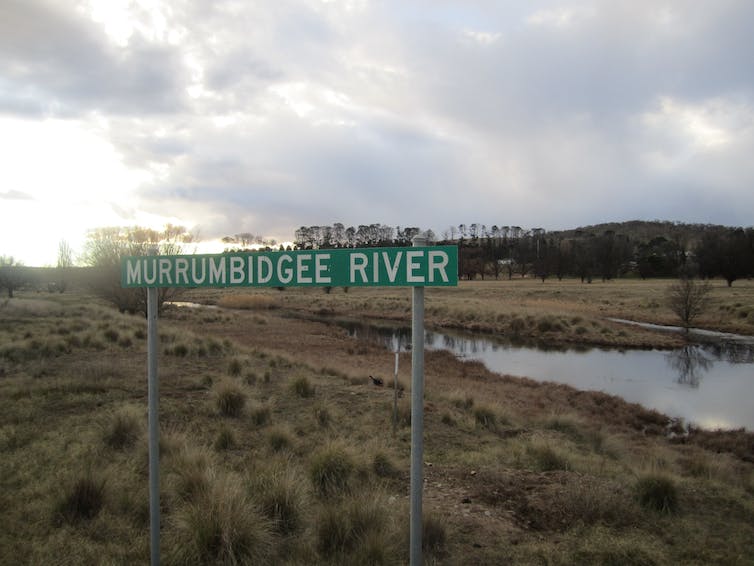 The Murrumbidgee River catchment is approximately 84,000 square kilometres, or about 8% of the basin. It encompasses a complex series of wetlands and floodplains, and supplies water for homes in many communities, including Wagga Wagga, Griffith and Leeton.

Using statistical analysis and machine learning, we found the Murrumbidgee River dropped from 3.5 metres in 1990 to 2.5 metres in 2019 during the cooler months. When you multiply this by the the length and breadth of the river, which stretches more than 1,400km, this is an enormous volume of water lost.

Given this drop is associated with the wettest months from April to September, the outlook for the warmer months between October and March is dismal. The number of days when the river ceases to flow will certainly increase.

Dam building and excessive irrigation are often behind decreased river flows across the Murray-Darling Basin. But in this case, we can point to decreased rainfall from climate change as the reason the Murrumbidgee River catchment is losing water.

Read more: We looked at 35 years of rainfall and learnt how droughts start in the Murray-Darling Basin

Likewise, we didn’t identify irrigation as a major contributor, because more than 80% of irrigation occurs downstream of Wagga Wagga. 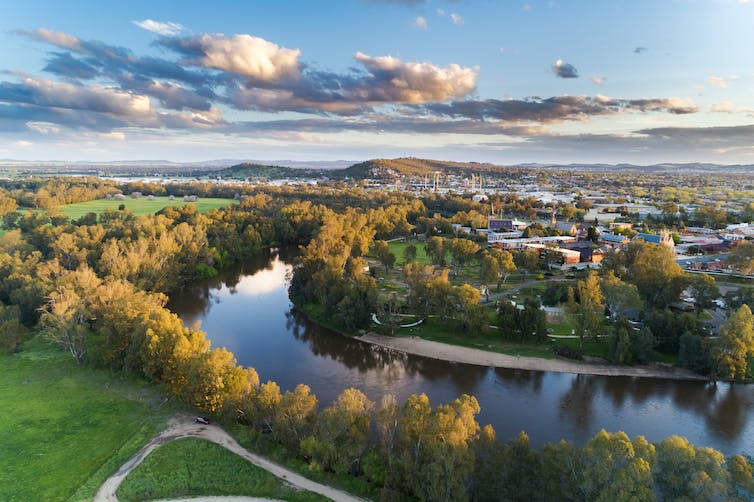 The Murrumbidgee River is over 1,400 kilometres long, and flows past Wagga Wagga. Shutterstock

Global warming has accelerated in the latter half of last century, and particularly since the 1990s in Australia.

To see its effect in Australia, we need only look to the extended drought conditions since the mid-1990s in the basin, comprising the Millennium Drought (1997-2009) and the 2017-2019 drought. They were extreme, even compared to the historical Federation Drought between 1895 and 1903.

In 2006, the Australian newspaper reported that inflows to the nearby River Murray system between June and November were 610 gigalitres, “just 56 percent of the previously recorded low in 1902” when the Federation Drought was at its worst.

But climate change doesn’t tell the whole story, there are also other factors at play driving the low rainfall trend in the basin. Namely, natural climate phenomena form over the ocean and bring wetter or drier weather to various parts of Australia.

One of these climate phenomena is the Indian Ocean Dipole (IOD), which brings wetter weather than normal from June to October when in its “negative” phase (in fact, the Bureau of Meteorology recently declared another negative IOD for Australia this year, the first in five years).

Read more: A wet winter, a soggy spring: what is the negative Indian Ocean Dipole, and why is it so important?

But in the last two decades there have been only two strongly negative-phase Indian Ocean Dipole (IOD) events affecting Australia. The current IOD phase is only moderately negative.

Climate drivers like this are entirely natural and have been occurring for thousands of years, but human-caused climate change exacerbates their influence. Generally, it makes dry seasons drier, and wet seasons wetter. 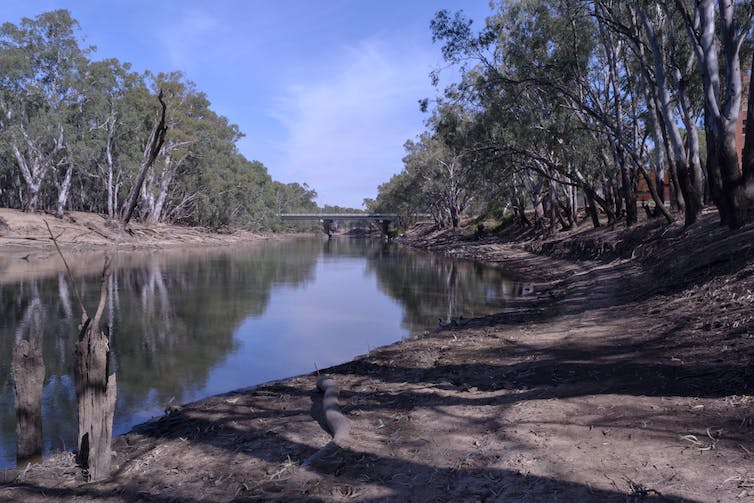 After years of little rain or snowmelt, evaporation accentuates the lack off run-off. Shutterstock

In April this year, devastating floods engulfed western Sydney. This resulted in the dams reaching nearly 100% capacity last month. However, the river height at Wagga Wagga is currently around 5.3m and this is still 2m below the minor flood level of 7.3m — too low to overflow into the surrounding floodplain.

And after years of little rain or snowmelt, evaporation accentuates the lack off run-off into dams and streams, because water needs to soak into dry catchments before significant run-off can occur.

The implications of our research are profoundly disturbing, because it means the economic, social and ecological sustainability of the Murrumbidgee River catchment is at stake.

Under climate change, we can expect further drying of wetlands and major losses of wildlife habitat. For example, the mid-Murrumbidgee and the Lowbidgee wetlands are listed as nationally significant, providing critical habitat for threatened frogs, such as the vulnerable southern bell frog. 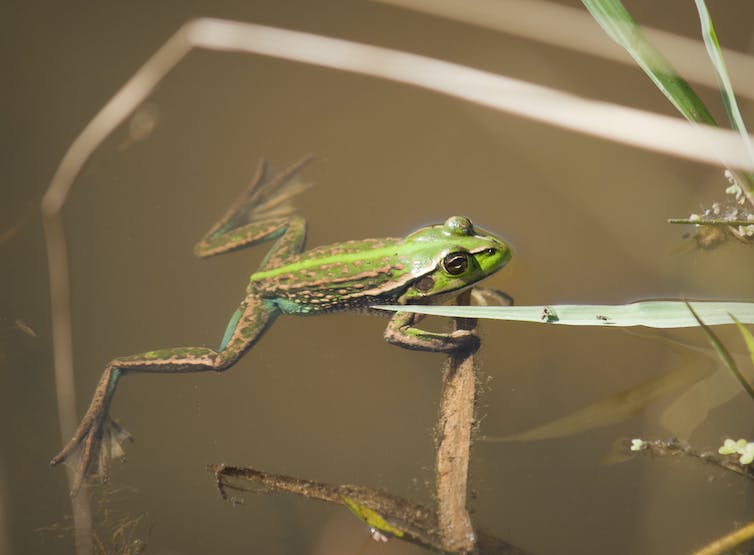 The southern bell frog is threatened by habitat loss and degradation, barriers to movement, predation, disease and exposure to biocides. Shutterstock

For farmers and communities, we can expect huge reductions in the amount of water allocated for irrigation. The ability for communities to survive these severe decreases in agricultural productivity will be tested.

The efficiency of farm practices is improving. But because of the continuing threat of drought conditions in a warming climate, there’s an urgent need to plan for further decreases in rainfall, and further unreliability of water supply.

Australia needs a new review of water availability and sustainability in the Murrumbidgee and other river systems in the southern Murray-Darling Basin.