Murmurs regarding the decline of the Olympics appear to have been premature. Despite the well-founded critiques, doubts, concerns, and ambivalence before the Tokyo games began, they have provided many compelling moments, stories, and discussion points that have gripped much of the world.

Indeed, many people have expressed surprise at just how much they have become swept up in these games - at how much meaning they have derived from a sporting event that before it began, seemed out of place in a world still grappling with the devastating COVID pandemic.

There’s even a palpable grief for some people at the end of the Olympics, particularly in areas of the world still enduring lockdowns.

In the aftermath of the Tokyo Olympics, it’s worth reflecting on just what kind of meaning the games still generate. What’s at stake in the passions, struggles, triumphs, and heartache that, alongside COVID, have dominated news cycles for the past three weeks?

The power of national glory

The modern Olympics have long been based on the notion that sport is a force for good. Put simply, they still purport to help make the world a better place.

Yet, after the disastrous second and third Olympics in Paris (1900) and St Louis (1904) that were overshadowed by festivals of white supremacy, it was the playing out of national rivalries — and the possibility of national glory — that drove rising public interest in the games.

By 1912, Australians were already so emotionally invested that they raised enough funds to send swimming star Fanny Durack to the Stockholm Olympics.

The modern Olympics had been developed to showcase and celebrate strong, athletic men. But after winning gold in the women’s 100-metre freestyle, Durack became a national hero, as did her silver-medal winning compatriot Mina Wylie (whose family had paid the costs of her travel to the games).

The strange, yet powerful, sense of national achievement – and even vindication — in the deeds of athletes continues to shape much of the ongoing fascination with the Olympics. Australian athletes have had many remarkable performances at the Tokyo Olympics. Like Durack and Wylie before them, Ariarne Titmus, Patty Mills, Jess Fox, Melissa Wu, Peter Bol, and so many others have captivated a nation.

These athletes bring joy, amazement, pride, and inspiration. And they are loved for it. But the Tokyo Olympics have also given us a clearer insight into the costs that such adoration entails. 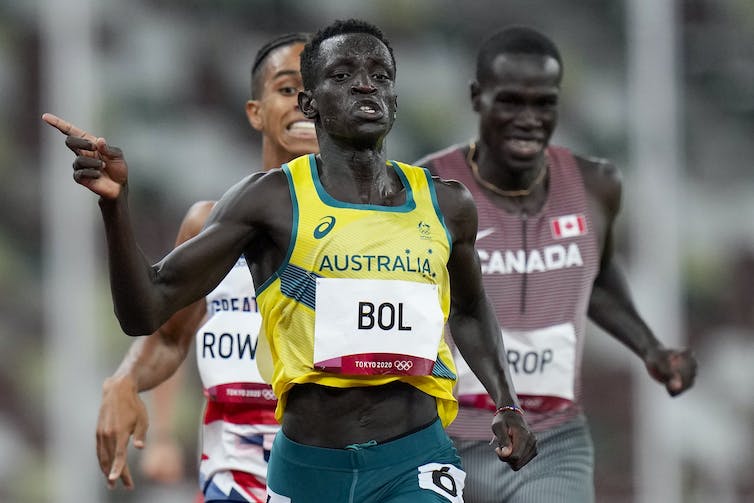 The focus on individual athletes — especially those expected to bring national glory — is intense. Those athletes deemed to have “failed” can quickly find the love they were previously showered with was conditional.

Olympic athletes are loved for what they have done or might do — not (so much) for who they are as people. This adoration is based on the powerful, joyous feelings they can bring and the way their triumphs are vicariously shared.

At issue is a powerful form of identification that can become possessive. For many fans, it feels like the athletes not only represent their nation, but also them as individuals. These fans frequently behave as if what happens to the athlete happens to them. Hence the ecstasy when the athlete achieves greatness.

On the flip side, however, when the expectations of fans are not met, they frequently react as if they have been personally betrayed.

The bitterness, judgement, and even hate directed at Simone Biles when she withdrew from the gymnastics team event was extreme. Although Biles also received an outpouring of support on social media, the racial - and racist - dynamics of the stinging criticism and vilification directed at her were striking. 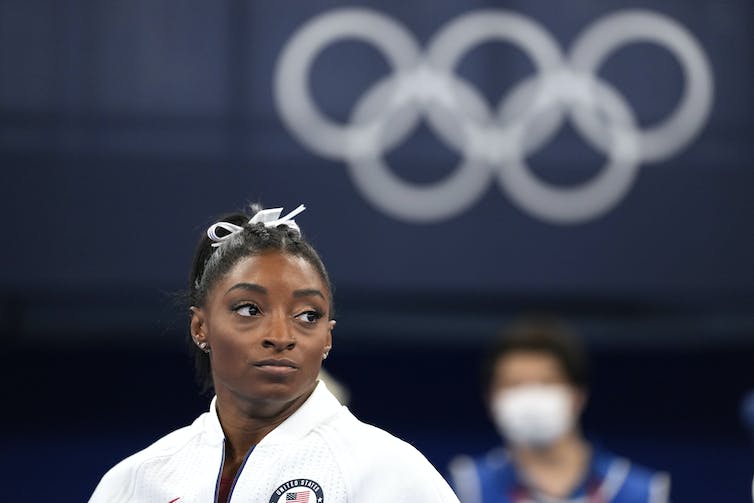 Simone Biles has said the abuse she suffered from a former team doctor may have weighed on her in Tokyo. Ashley Landis/AP

Many white men in particular seemed personally offended that Biles had prioritised her physical and mental health, saying no to a performance that they had expected would bring them pleasure.

In Australia, Ben Simmons was similarly vilified for withdrawing from the men’s basketball team, as if he had broken an unwritten contract to perform for the nation’s benefit. (In stark contrast, Patty Mills was fulsome in his support of Simmons.)

Even Jess Fox was castigated on social media for “only” winning a bronze medal in the K1 slalom, although her “failure” was quickly forgiven after she won gold in the C1 event.

What (and who) is forgotten

The fervent meaning so many Australians find in Olympic performances regularly disproves the notion we are more interested in watching men play sports than women.

As is frequently the case, most of the Australian heroes of the Tokyo Olympics have been women. And millions of people have tuned in to watch them compete.

Yet, somehow the compelling, thrilling performance of female athletes is conveniently forgotten when questions are raised about why competitions like the AFLW still receives less financial investment and media coverage than AFLM.

Equally disturbing, even in the midst of an Olympics characterised by inspiring feats from Australian women, 80% of the mainstream Australian media’s general sports coverage (across all sporting competitions) still focused on men.

And it is not only the performances of Australian women that are frequently forgotten. The coverage of Rohan Browning’s impressive performance in the men’s 100-metre heats tended to elide the feats of Kaanju man Patrick Johnson, who represented Australia in sprint events in the 2000 and 2004 Olympics.

Johnson not only holds the Australian record for the fastest time in the 100 metres, but remains the only Australian to have run a time under 10 seconds. That he is less well-known than the slower Matt Shirvington (who also competed in the 100 metres at the 2000 Sydney Games) reveals much about Australian race relations.

These Olympics have also raised vital questions regarding the treatment of trans athletes, the problematic policing of gender, and the way gender diversity challenges the strict binary nature of most sporting competitions.

A force for justice?

The relationship of Australia to the First Nations people whose land remains unceded was a focus for the Matildas team who took a photo of themselves behind the Aboriginal flag after arriving in Tokyo.

In doing so, the Matildas were following a long tradition of using the national and international focus on the Olympics to raise (more) vital issues.

Around the same time, the International Olympic Committee was banning its numerous media staff from posting photos of athletes who took a knee before their events in support of the Black Lives Matter movement. Although the IOC soon retracted this ban after it drew widespread criticism, it highlighted the organisation’s reluctance for the Olympics to provoke discussions of justice, despite the IOC’s professed commitment for the games to improve the world.

To the IOC’s likely dismay, the anti-protest rule in the IOC charter, which was written in the aftermath of the famous Black power salute at the 1968 Mexico Olympics, is in the news again.

Raven Saunders, a queer, Black American, crossed her raised arms over her head in an “X” after winning the silver medal in the Women’s Shot put. As Saunders later explained, the “X” was “the intersection of where all people who are oppressed meet”. 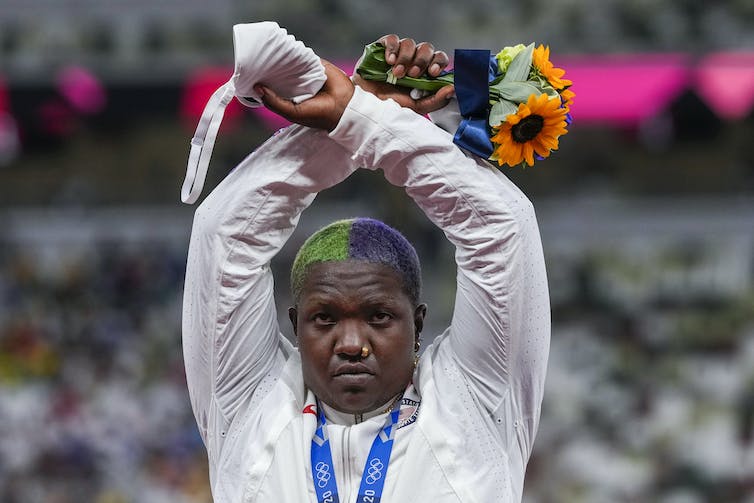 Raven Saunders has spoken openly about her struggles with depression and her views on inequality. Francisco Seco/AP

While the IOC suspended their investigation into Saunders after the tragic death of her mother, the matter once again raises questions as to the immense meaning the Olympics generate, and what this meaning might facilitate.

Like many Olympics before it, the Tokyo Games have created compelling sporting moments — when, for a few minutes, it felt like nothing else mattered. The end of the men’s high jump competition, when the two leaders decided to share the gold medal rather than have a jump-off, was celebrated around the world as an act of inspiring sports-personship.

Yet, while the power of the Olympics should not be underestimated, especially when it comes to the public fascination with women’s sports, the IOC should be less frightened of the way the games might promote the need for justice.

Until then, the burden of dealing with, resisting, and making use of the spotlight that comes with the Olympics will fall unequally on the athletes themselves.