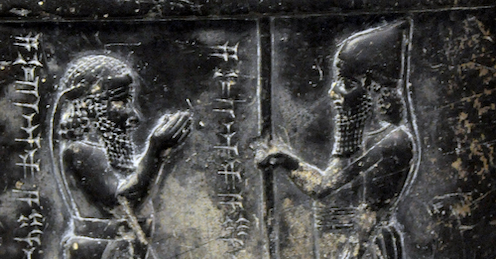 This stone tablet records the restoration of certain lands by the Babylonian king Nabu-apla-iddina to a priest. Babylonian, circa 870 BCE. From Sippar (Tell Abu Habbah)Wikipedia

Our modern understanding of trigonometry harks back to ancient Greek astronomers studying the movement of celestial bodies through the night sky.

Our modern understanding of trigonometry harks back to ancient Greek astronomers studying the movement of celestial bodies through the night sky.

But in 2017, I showed the ancient Babylonians likely developed their own kind of “proto-trigonometry” more than 1,000 years before the Greeks. So why were the Babylonians interested in right-angled triangles? What did they use them for?

I have spent the past few years trying to find out. My research, published today in Foundations of Science, shows the answer was hiding in plain sight.

Many thousands of clay tablets have been retrieved from the lost cities of ancient Babylon, in present-day Iraq. These documents were preserved beneath the desert through millennia. Once uncovered they found their way into museums, libraries and private collections.

One example is the approximately 3,700-year-old cadastral survey Si.427, which depicts a surveyor’s plan of a field. It was excavated by Father Jean-Vincent Scheil during an 1894 French archaeological expedition at Sippar, southwest of Baghdad. But its significance was not understood at the time. 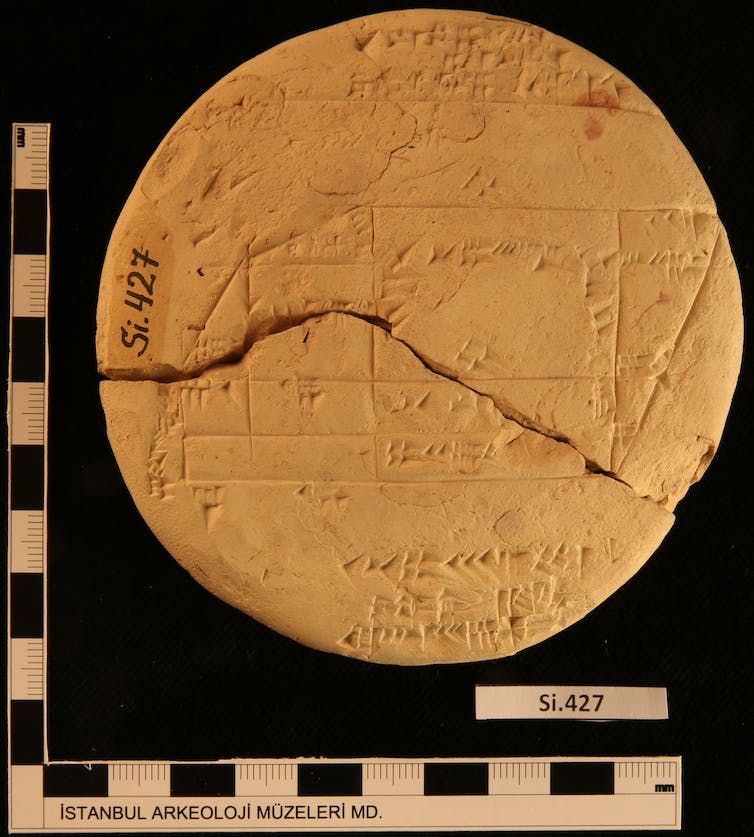 Si.427 shows a surveyor’s plan of a field. Author provided

It turns out that Si.427 — which has been in Turkey’s İstanbul Arkeoloji Müzeleri (Istanbul Archaeological Museums) for several decades and is currently on display — is in fact one of the oldest examples of applied geometry from the ancient world. Let’s look at what makes it so special.

A brief history of Babylonian surveying

The ancient Babylonians valued land, much as we do today. Early on, large swathes of agricultural land were owned by institutions such as temples or palaces.

Professional surveyors would measure these fields to estimate the size of the harvest. But they did not establish field boundaries. It seems those powerful institutions did not need a surveyor, or anyone else, to tell them what they owned.

The nature of land ownership changed during the Old Babylonian period, between 1900 and 1600 BCE. Rather than large institutional fields, smaller fields could now be owned by regular people.

This change had an impact on the way land was measured. Unlike institutions, private landowners needed surveyors to establish boundaries and resolve disputes.

The need for accurate surveying is apparent from an Old Babylonian poem about quarrelling students learning to become surveyors. The older student admonishes the younger student, saying:

Go to divide a plot, and you are not able to divide the plot; go to apportion a field, and you cannot even hold the tape and rod properly. The field pegs you are unable to place; you cannot figure out its shape, so that when wronged men have a quarrel you are not able to bring peace, but you allow brother to attack brother. Among the scribes, you (alone) are unfit for the clay.

This poem mentions the tape and rod, which are references to the standard Babylonian surveying tools: the measuring rope and unit rod. These were revered symbols of fairness and justice in ancient Babylon and were often seen in the hands of goddesses and kings. 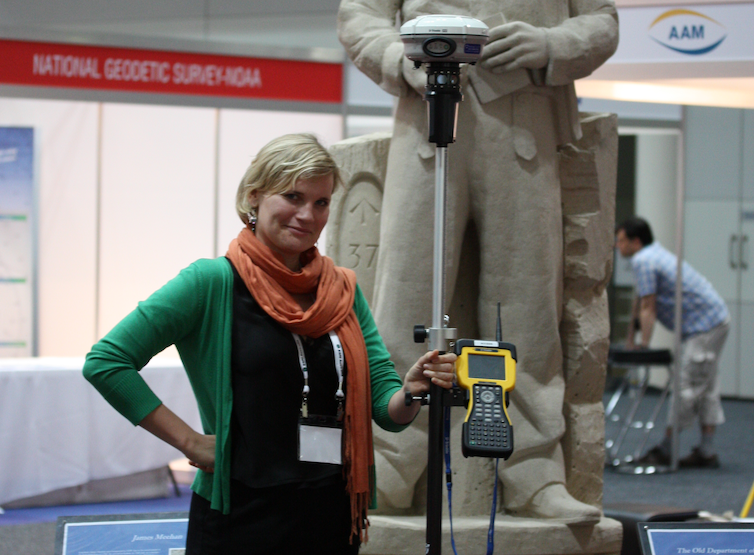 Babylonian surveyors would use these tools to divide land into manageable shapes: rectangles, right-angled triangles and right trapezoids.

Earlier on, before surveyors needed to establish boundaries, they would simply make agricultural estimates. So 90° angles back then were good approximations, but they were never quite right.

The Old Babylonian cadastral survey Si.427 shows the boundaries of a small parcel of land purchased from an individual known as Sîn-bêl-apli.

There are some marshy regions which must have been important since they are measured very carefully. Sounds like a normal day at work for a Babylonian surveyor, right? But there is something very distinct about Si.427.

In earlier surveys, the 90° angles are just approximations, but in Si.427 the corners are exactly 90°. How could someone with just a measuring rope and unit rod make such accurate right angles? Well, by making a Pythagorean triple.

A Pythagorean triple is a special kind of right-angled triangle (or rectangle) with simple measurements that satisfy Pythagoras’s theorem. They are easy to consturct and have theoretically perfect right angles.

Pythagorean triples were used in ancient India to make rectangular fire altars, potentially as far back as 800 BCE. Through Si.427, we now know ancient Babylonians used them to make accurate land measurements as far back as 1900 BCE.

Si.427 contains not one, but three Pythagorean triples.

Si.427 has also helped us understand other tablets from the Old Babylonian era.

Not all Pythagorean triples were useful to Babylonian surveyors. What makes a Pythagorean triple useful are its sides. Specifically, the sides have to be “regular”, which means they can be scaled up or down to any length. Regular numbers have no prime factors apart from 2, 3 and 5.

But instead of these ratios, Plimpton 322 tells us which sides of a Pythagorean triple are regular and therefore useful in surveying. It is easy to imagine it was made by a pure mathematician who wanted to know why some Pythagorean triples were usable while others were not. 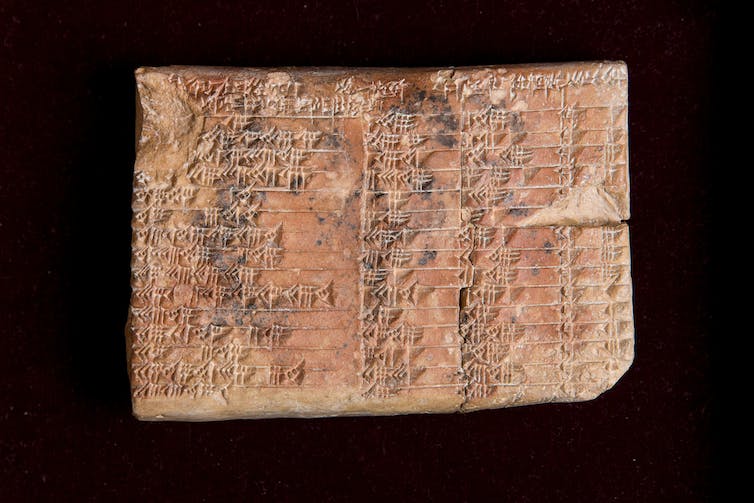 Plimpton 322 in the Rare Book and Manuscript Library at Columbia University in New York. UNSW/Andrew Kelly

Alternatively, Plimpton 322 could have been made to solve some specific practical problem. While we will never know the author’s true intentions, it is probably somewhere between these two possibilities. What we do know is the Babylonians developed their own unique understanding of Pythagorean triples.

This “proto-trigonometry” is equivalent to the trigonometry developed by ancient Greek astronomers. Yet it is different because it was developed in response to the problems faced by Babylonian surveyors looking not at the night sky — but at the land.

In this short video I summarise my findings, explaining how the ancient clay tablet Si.427 is the oldest known and most complete example of applied geometry.