Surrealism — famously defined by Andre Breton in his 1924 Manifesto of Surrealism as “pure psychic automatism” — first emerged in Australian art in the 1930s when local artists saw selected paintings by Salvador Dali and Paul Nash in the Herald exhibition, which opened in Adelaide in 1939 before touring to Sydney and Melbourne.

Painter James Gleeson wrote about surrealism for Art in Australia in 1940 and, in the hands of James Cant and Ivor Francis, it became a form of protest in the war years. Gleeson produced an unceasing stream of surrealist paintings and drawings, but he had few fellow travellers.

For many years, surrealism in Australia was seen as a French import. It was not until the emergence in the 1990s of ideas of multiple modernisms — rather than a singular version emanating from a cultural centre such as Paris — that credence was given to a homegrown Australian surrealism.

Within that new framework, suddenly a host of Australian artists were swept up under the surrealist umbrella: Sidney Nolan, Robert Klippel, Joy Hester, Max Dupain, Adrian Feint and Sam Atyeo, to name a few. For many of these artists, though, surrealism was not their major thrust, instead working across a range of modern styles such as expressionism or abstraction.

The touchstone of surrealism — the unity of opposites to create new knowledge — takes on an oceanic inflection in the Art Gallery of South Australia’s new exhibition exploring the work of two Czech-born Australian artists, the brothers Dušan and Voitre Marek. 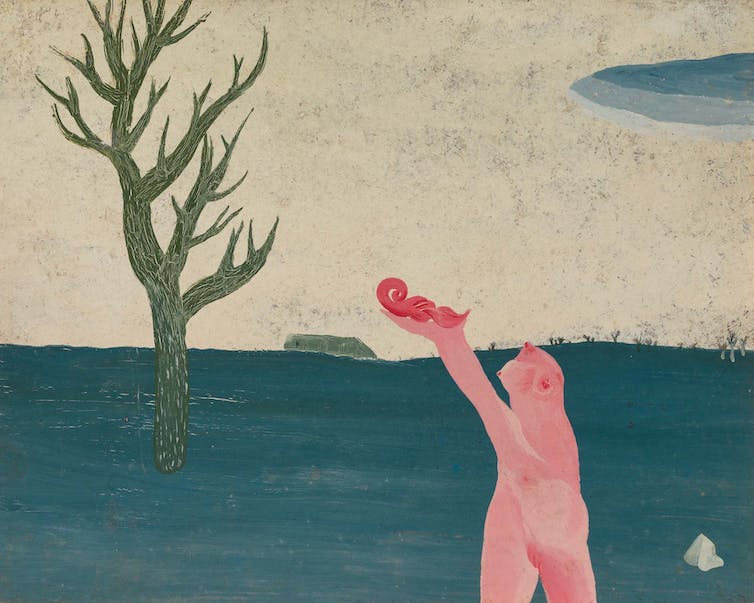 They are not an addendum to Australian surrealism: their Czech-nurtured variant, with its deep roots in poetry, differs from the mainstream in this country. Its full incorporation into Australian art requires a recalibration of our national narrative along the lines that recently occurred with émigré Bauhaus practitioners in this country.

The world of the sea

While Dušan, and Voitre to a lesser extent, were included in survey exhibitions such as Lurid Beauty over the past few decades, examination of their work has been cursory and mostly confined to early-career paintings. 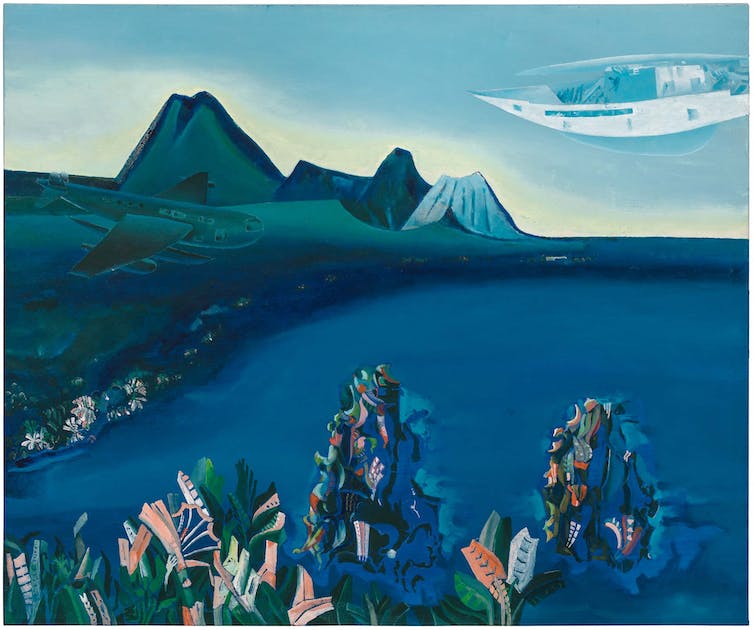 Surrealists at Sea explores their work in depth, dwelling on their ideas and work in diverse media, especially Dušan’s stunning mid-century films, and how they sustained their surrealist practice across their entire careers.

Viewers enter the exhibition through a series of columns that display their early paintings such as Voitre’s My Gibraltar, as well as those that are double-sided, and signal a non-linear and relational pathway through the art.

The double-sided paintings produced on board the ship SS Charlton Sovereign that carried the two avant-garde émigrés to Australia in 1948, such as Dusan’s Perpetuum Mobile, are brilliantly displayed in the open portals of the columns. Seeing the front and back of the image, in simultaneous vision, sets the scene for a surrealist journey through the exhibition: their first joint one since 1949. 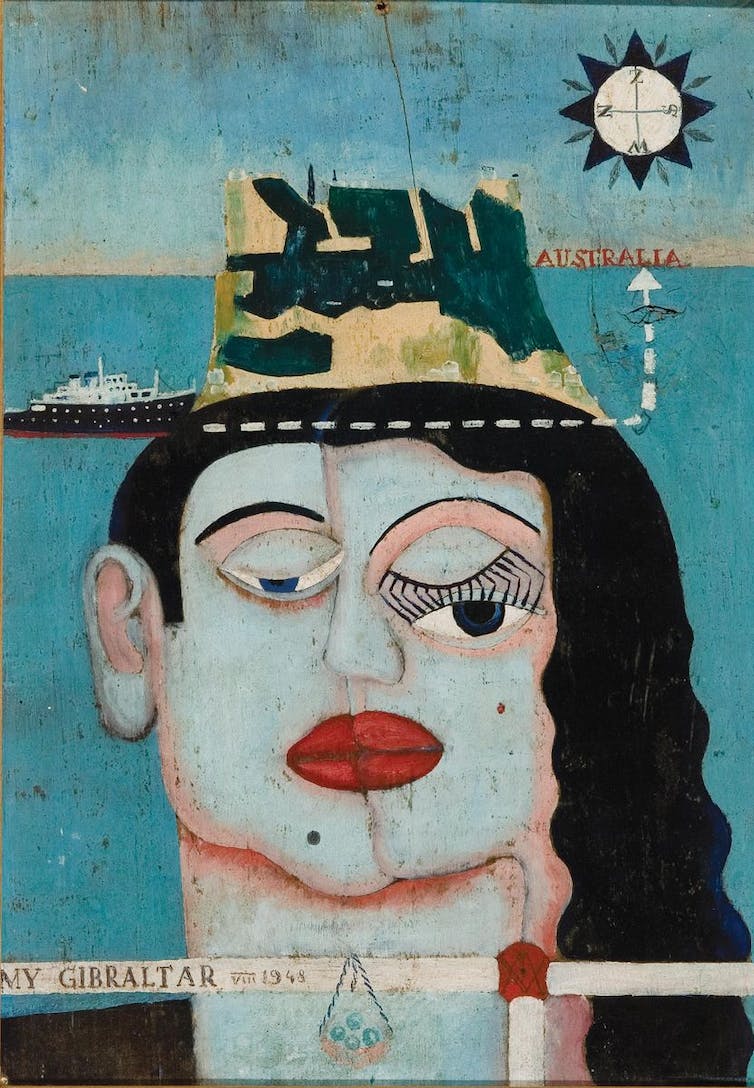 The sea is a familiar trope in surrealism, as in the other-worldly paintings of French artist Yves Tanguy. But for curator Elle Freak, the sea is a wholly apt metaphor to frame the Mareks.

The brothers’ journey across the ocean was to liberty and freedom, a key surrealist dictum, and the ship was the site of production of major paintings such as Equator, complete with its telling text: “Break the mirror to see what I am”. 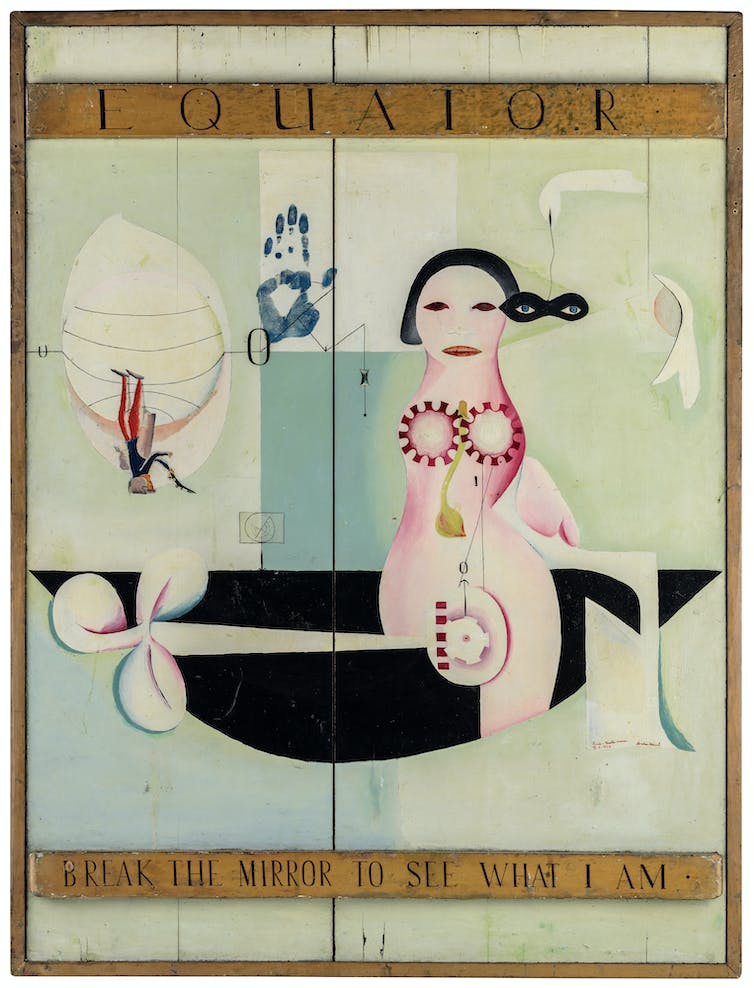 The ocean continued to be a source of spiritual renewal throughout their careers, for Voitre as lighthouse-keeper at remote Cape du Couedic on Kangaroo Island; for Dušan in New Guinea, the so-called centre of the Pacific (and the world) in the 1929 Surrealist World Map; and later in the Coorong.

This is a large exhibition, 200 works across all media, including surrealist jewellery, film and sculptural paintings, and a very elegant restaging of Dušan’s 1953 solo exhibition at the avant-garde Mack Gallery in Sydney, complete with the original ticking clocks and music box. 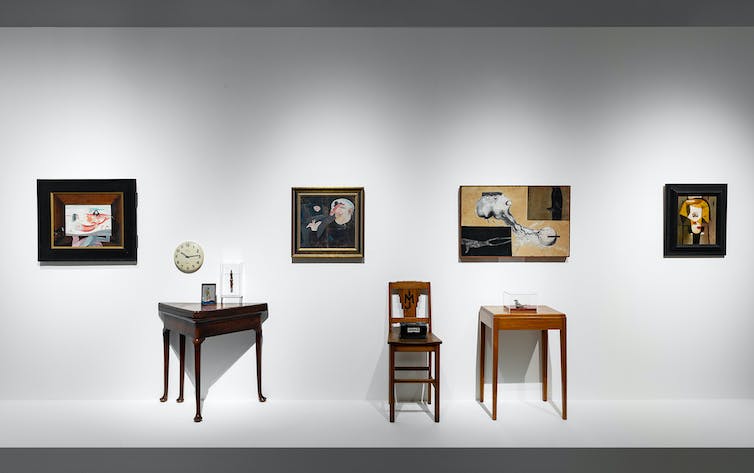 A profound sense of poetry infuses the exhibition: the Czech variant of surrealism was deeply literary and some paintings read like poetry. Automatic drawing — a surrealist device to access subconscious imagery — came easily to the brothers. Voitre’s free-flowing drawings such as Victim of the world, 1952, seems like an image that has come from deep within.

A clue lies in his Adelaide notebook: 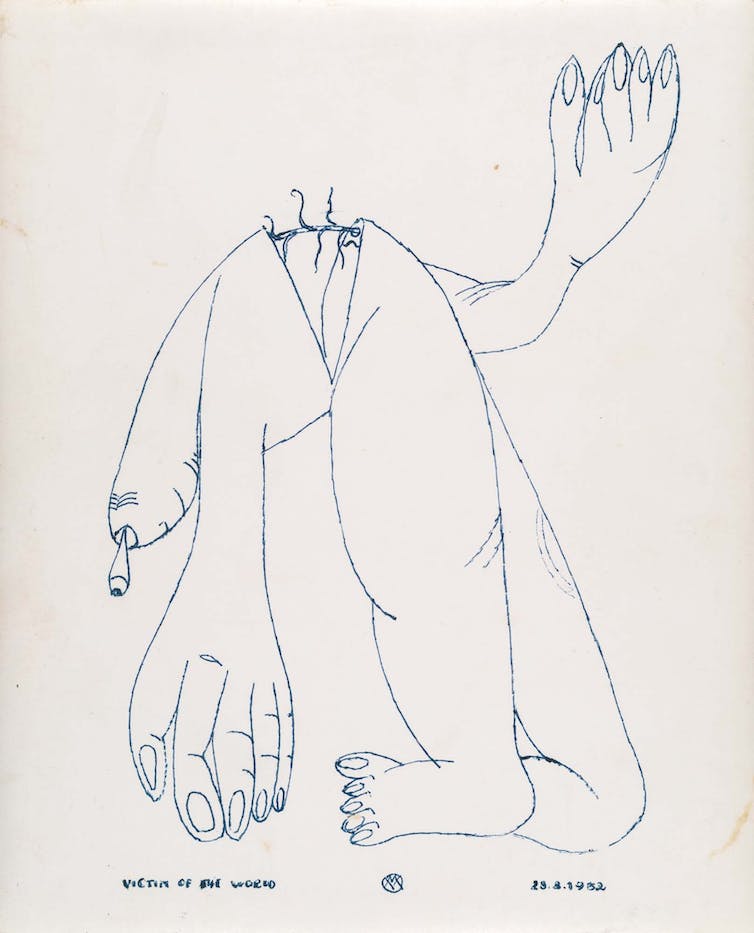 The artists’ notebooks have been recently translated and key phrases such as “seeing not only with eye in eyeholes but opening new eyes in knees, in throat, in palms” are reproduced as bite-sized wall text to give viewers an insight into how the artists viewed art-making.

Other works, true to surrealist style, are but fragments of thought, with Dušan challenging complacency:

people search vainly for symbols and meaning, nothing is there, everything is present.

Voitre Marek segued into ecclesiastical sculpture and a number are on show, such as his very modern and finely distilled Crucifix of 1960. 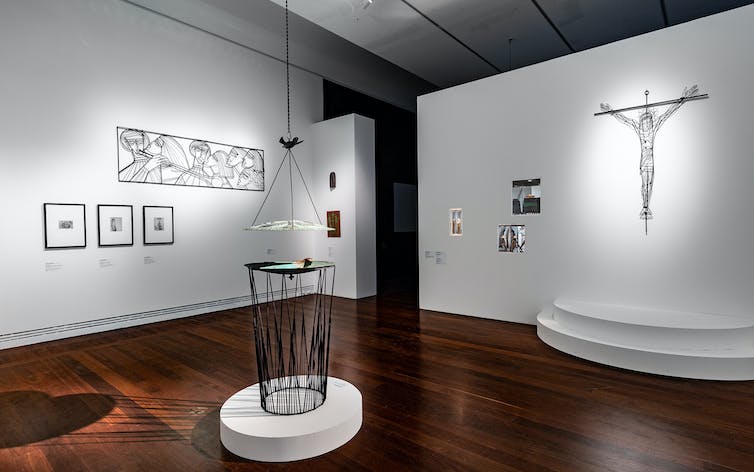 The spell of the slow music playing in each gallery space leads to contemplation of other worlds and to new insights intrinsic to surrealism.

Australian art is a malleable feast which moves and shakes to embrace new arrivals to this country. This repositioning is in fact a revisionary one to more fully include two important émigrés in the canon of Australian surrealism.

Dušan and Voitre Marek: Surrealists at Sea is at the Art Gallery of South Australia until September 12.