Weeks of tensions between Palestinian protesters and Israeli security forces in East Jerusalem have boiled over in recent days, unleashing some of the worst violence between Israel and the Palestinians in years.

Ostensibly, the rocket launches by Hamas were a response to Israeli police storming the al-Aqsa mosque compound in East Jerusalem on Laylat al-Qadr, the Night of Power, one of the holiest nights of the year for Muslims. The incident injured hundreds over the weekend.

Hamas then issued an ultimatum demanding Israeli forces withdraw from the compound — the third holiest site in Islam, part of which comprises the Wailing Wall — by a specific deadline. When Israel refused, Hamas’s military wing followed through on its threat by firing rockets toward Jerusalem, forcing Israeli lawmakers to flee parliament. 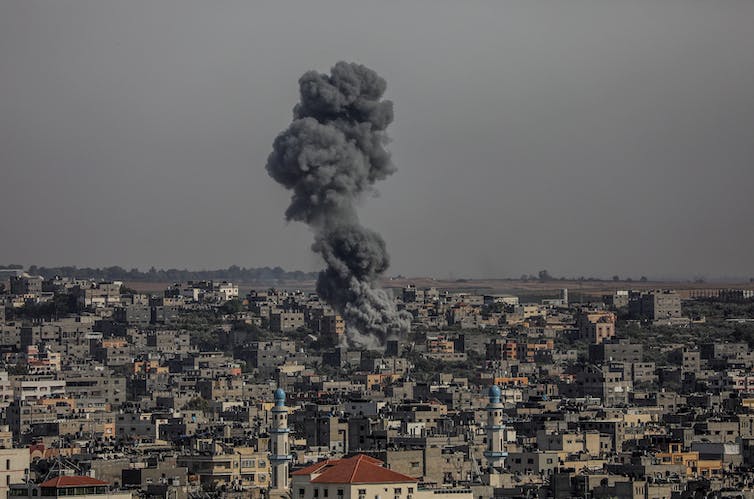 Palestinian health officials say more than 200 people have been wounded in the Israeli airstrikes on Gaza. MOHAMMED SABER/EPA

Beyond the mosque confrontation, though, there are broader historical and political factors at work.

Monday’s airstrikes fell on Jerusalem Day, when Israeli Jews celebrate the “reunification” of Jerusalem following the Six Day War of 1967. As the ongoing unrest demonstrates, the city is far from unified.

Adding to the tensions, thousands of Jewish ultra-nationalists had planned to march through Palestinian-dominated East Jerusalem on Jerusalem Day as a demonstration of Jewish sovereignty over the entire city.

Read more: Palestinians will never be convinced a deal with Israel is worth making if annexation is packaged as peace

Israeli police changed the route at the last moment, partly due to the increasingly violent clashes between security forces and Palestinian demonstrators during Ramadan.

There were also concerns of unrest if the Israeli Supreme Court handed down its decision on whether four Palestinian families should be evicted from their homes in the Shiekh Jarrah neighbourhood of East Jerusalem, to be replaced by Jewish settlers. This is the culmination of a decades-long legal battle dismissed as “a real estate dispute” by Israeli officials. 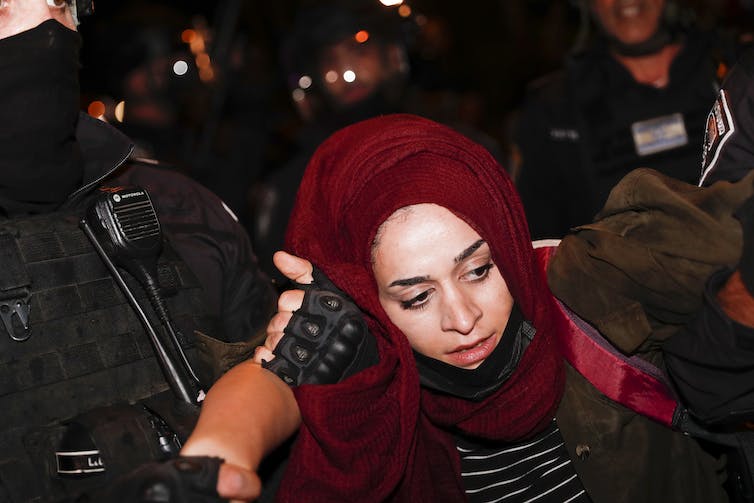 Israeli police arrest a Palestinian demonstrator during a protest in support of Palestinian families facing eviction from their homes at Sheikh Jarrah. ATEF SAFADI/EPA

This case is emblematic of the systematic appropriation of Palestinian homes and land in East Jerusalem since 1967. The seizure of Palestinian property is so common here, an Israeli settler was captured on video recently telling a Palestinian,

If I don’t steal your home, someone else will steal it.

The recent evictions in Shiekh Jarrah have been described by Hamas officials — and Palestinian supporters elsewhere — as a form of ethnic cleansing.

The Biden administration has also said it is “deeply concerned” about the potential evictions, while urging leaders across the spectrum to “denounce all violent acts”.

Israeli settlement building and expansion, especially in and around East Jerusalem, is a deliberate strategy. This is not only being done to appropriate Palestinian land, but to alter the demographics of the area and prevent the establishment of a sovereign Palestine with East Jerusalem as its capital.

Israel exclusively claims Jerusalem - home of the ancient Temple Mount, the holiest site in Judaism - as its eternal undivided capital. 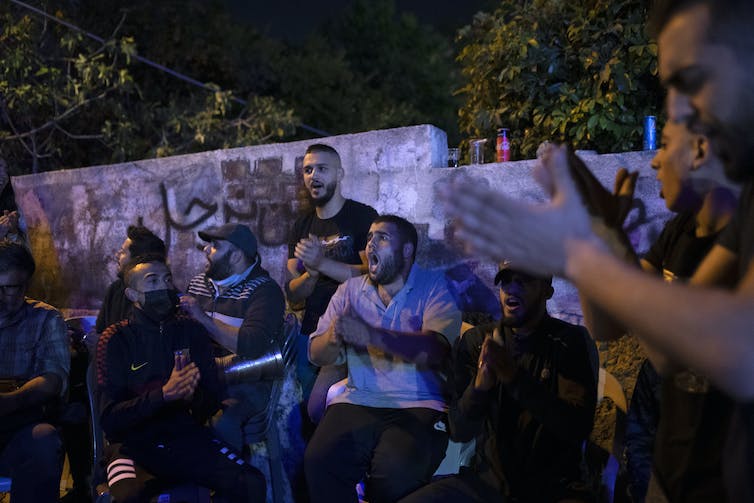 Palestinians sing during a protest against evictions in the Sheikh Jarrah neighbourhood. Maya Alleruzzo/AP

On May 14, 1948, Zionist leaders unilaterally declared the independence of the state of Israel, sparking the first Arab-Israeli War. During the war, over 400 Palestinian villages and towns were depopulated and obliterated to make way for modern Jewish towns and cities.

This Saturday marks al-Nakba, or the “Catastrophe”, for Palestinians. It is the day of mourning for the loss of historical Palestine and the expulsion of over 700,000 Palestinians from their ancestral homeland.

This process has continued throughout East Jerusalem and the West Bank since their occupation in 1967. There are now more than 5 million Palestinian refugees registered with the UN, nearly a third of whom live in refugee camps.

The plight of Palestinian refugees remains a particularly contentious issue for the two sides. A UN General Assembly resolution in 1948 asserted the right of refugees to return to the areas captured by Israel in 1948-49.

And in 1967, a UN Security Council resolution demanded Israeli forces withdraw from territories captured during the Six Day War.

The Israeli annexation of East Jerusalem and its ongoing settler activities in the West Bank contravene international humanitarian law. They are also not recognised by the vast majority of the international community, with the notable exception of the US under the Trump administration.

Yet, Palestinian dispossession continues today with over 600,000 Israeli settlers now living across the West Bank and East Jerusalem. 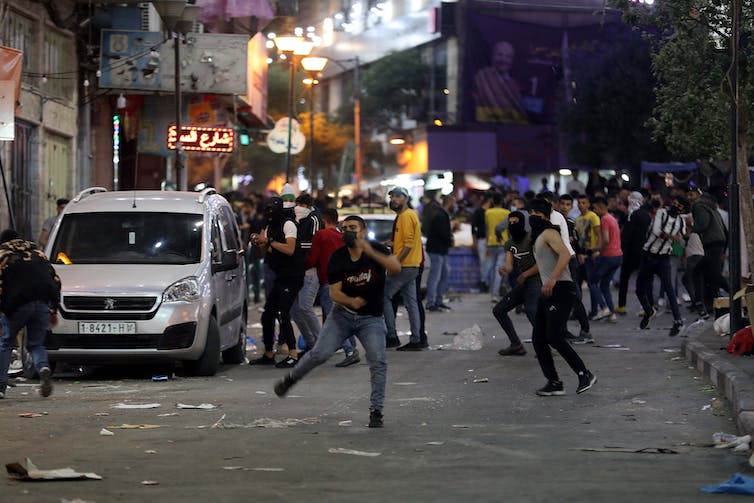 The continued Israeli occupation of these territories, coupled with the appropriation of Palestinian land, are among the primary causes of conflict between the two sides.

But there are also domestic political factors at play. Hamas is a resistance organisation, which is also responsible for administering the Gaza Strip. Its legitimacy largely rests on its resistance credentials, which means the movement routinely feels obligated to demonstrate its capacity to confront perceived Israeli aggression.

This is in stark contrast to the inaction of the Hamas’ rival party, Fatah, and its leader, Palestinian President Mahmoud Abbas, who has remained largely silent in recent weeks despite the loss of Palestinian lives.

Read more: Israel elections: Netanyahu may hold on to power, but political paralysis will remain

Israel’s political system is also in crisis, with no party able to form a stable government after four inconclusive elections in the past two years (and now a fifth potentially in the offing).

With the government in flux, pro-settler parties – namely Naftali Bennett’s New Right Party – have become the kingmakers in the Knesset. Any aspiring government will likely need their backing to form a majority, which requires the support of pro-settler policies.

With all of this in mind, we can expect more violence, regardless of who eventually wins power in Israel. Unless the international community — in particular, the Biden administration — intervenes to find a meaningful solution to the conflict.