China’s state-run anti-monopoly bureau has tightened its regulations on big tech players, as shown by its recent move against the country’s largest e-commerce company, Alibaba Group.

Alibaba was hit with a record antitrust fine of 18.2 billion yuan (more than A$3.6 billion) over the weekend for supposedly abusing its market dominance. The company, which operates the digital payment platform Alipay and offers bank loans to entrepreneurs, issued a public apology:

Alibaba accepts the penalty with sincerity and will ensure its compliance with determination. To serve its responsibility to society, Alibaba will operate in accordance with the law with utmost diligence, continue to strengthen its compliance systems, and build on growth through innovation.

Meanwhile, questions have been asked about the whereabouts of Alibaba’s founder Jack Ma. In October last year, Ma lashed out at China’s financial watchdogs and banks.

Among other complaints, he criticised the state-managed financial sector and was subsequently hauled into a meeting with regulators. After that, the always-visible Ma was not seen in public for months. 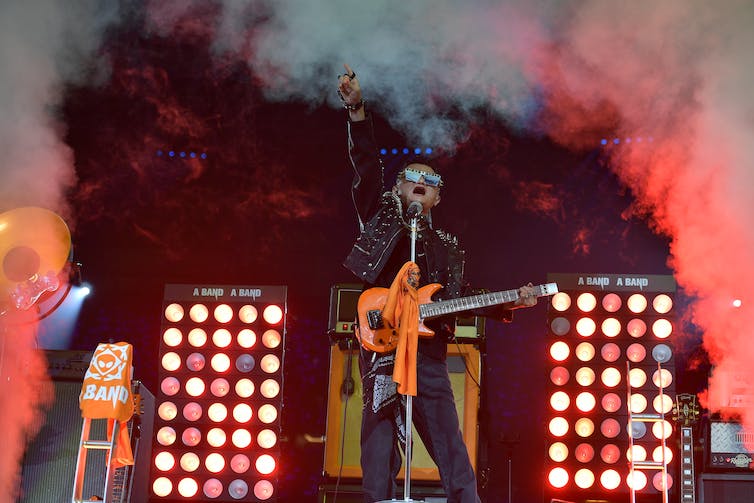 Jack Ma, founder of Alibaba Group, put on a performance at the company’s 20th anniversary in 2019. ICHPL Imaginechina/AP

Ma’s sudden withdrawal is just one of several developments that point to a huge shift in the regulation of China’s digital space. The lenience once accorded to tech companies by the state no longer holds true.

And recent actions against Alibaba may signal the beginning of the end of the romance between Chinese big tech and the government.

Some of Ma’s comments around that time were not received well in Beijing. In October, he claimed China’s banks operated with a “pawn-shop mentality”.

According to reports, President Xi Jinping himself authorised the subsequent withdrawal of Ant Group’s initial public offering launch on the Shanghai and Hong Kong stock exchanges.

The company was then forced to incorporate itself as a financial institution and subject itself to supervision by China’s state-controlled central bank.

Back when big tech was in the state’s pocket

There was a time in China when big tech firms lived the dream. Historically, China’s regulators have given its internet companies much more latitude than afforded to the tightly controlled state-owned media.

In 2000, when Alibaba was just one year old, only 1.8% of the Chinese population was online. This number now exceeds 50% of the population.

As my colleagues and I explain in our book, the Chinese government’s decision in 2007 to require all video-sharing platforms to be licensed led to the rapid market dominance of Baidu, Alibaba and Tencent. These were followed by Bytedance (which owns TikTok), Kuaishou and Meituan.

The licensing requirement was a response to pressure from international copyright holders, including the Motion Picture Association of America. It eliminated less financially robust operators, many of whom were breaching copyright.

Read more: China could be using TikTok to spy on Australians, but banning it isn’t a simple fix

Over the past decade it set up rural e-commerce hubs called Taobao villages to play to the government’s tune of “rural revitalisation”.

In 2015, when the central government announced a campaign to activate grassroots entrepreneurship, Alibaba partnered with the local provincial government in Zhejiang. The resulting project was aptly named “Dream Town”, which the governor of Zhejiang described as:

All the while, Alibaba had been adding several enterprises to its war chest, mostly acquisitions of smaller companies. It took the major share of popular video site Youku Tudou and bought into the film business, getting closer to younger audiences.

The state steps in

China’s internet companies have built the infrastructure of China’s digital economy, which is now estimated to account for 36.2% of GDP. This growth is largely due to the forces unleashed by China’s new breed of digital capitalists.

Alibaba has invested heavily in research and development over the years. It has a modern campus in the Yuhang district in Hangzhou, recruiting foreign talent. Other tech giants aren’t far behind. Tencent has similar campuses in Guangzhou and Shenzhen, and Huawei has one in Dongguan. 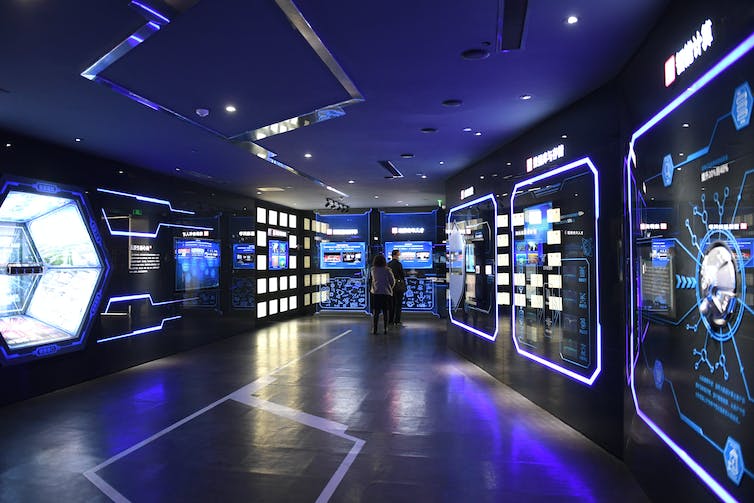 The Alibaba lakeside laboratory in the city of Hangzhou, in China’s Zhejiang province. TOPHO/AP

As Stephen Barthlomeusz of the Sydney Morning Herald notes, the state regulator’s recent targeting of Alibaba (and other major tech companies) doesn’t come without cost.

China’s tech market has driven growth and innovation. In fact, China’s anti-monopoly laws have existed since at least 2007. But their enforcement was lacking, as the state opted for innovation by nationalising the tech sector and letting it develop.

Putting a squeeze on activities now runs the risk of slowing down China’s economy. At the same time, the Chinese public is growing disillusioned with the predatory practices of big tech. Sound familiar?

Read more: Hundreds of Chinese citizens told me what they thought about the controversial social credit system

At the same time, China’s tech companies owe a great deal of their success to the government. The state allowed them to benefit from policies designed to keep foreign competitors at bay, and to attract human capital back to China to work in these enterprises.

In return, the companies have helped the Chinese state further its technocratic model of surveillance, through investing in the social credit system and facial recognition. 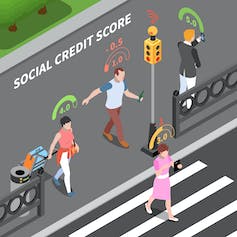 China’s social credit system is a national surveillance mechanism that will track citizens, companies and government entities, rating their ‘trustworthiness’. The state missed its rollout deadline for last year. Shutterstock

But the market no longer offers the pretence of distance from government intervention. And new laws allow the Chinese government to access information about the users of China’s tech platforms.

This is the status of the relationship going forward. The question now is whether this will lead to a permanent chill. In the year celebrating the 100th anniversary of the Chinese Communist Party, perhaps it would be more expedient for China’s tech companies to toe the party line.

With the state’s propaganda apparatus reminding people of its victory over capitalism, it’s in the interest of incumbent players to adopt the principles of socialism, rather than play to their shareholders.