Methane — a greenhouse gas far more potent than carbon dioxide — plays a major role in controlling the Earth’s climate. But methane concentrations in the atmosphere today are 150% higher than before the industrial revolution.

In our paper published today in Nature Geoscience, we show as much as half of global methane emissions come from aquatic ecosystems. This includes natural, human-created and human-impacted aquatic ecosystems — from flooded rice paddies and aquaculture ponds to wetlands, lakes and salt marshes.

Our findings are significant. Scientists had previously underestimated this global methane contribution due to underaccounting human-created and human-impacted aquatic ecosystems.

It’s critical we use this new information to stop rising methane concentrations derailing our attempts to stabilise the Earth’s temperature.

From underwater sediment to the atmosphere

Most of the methane emitted from aquatic ecosystems is produced by micro-organisms living in deep, oxygen-free sediments. These tiny organisms break down organic matter such as dead algae in a process called “methanogenesis”. 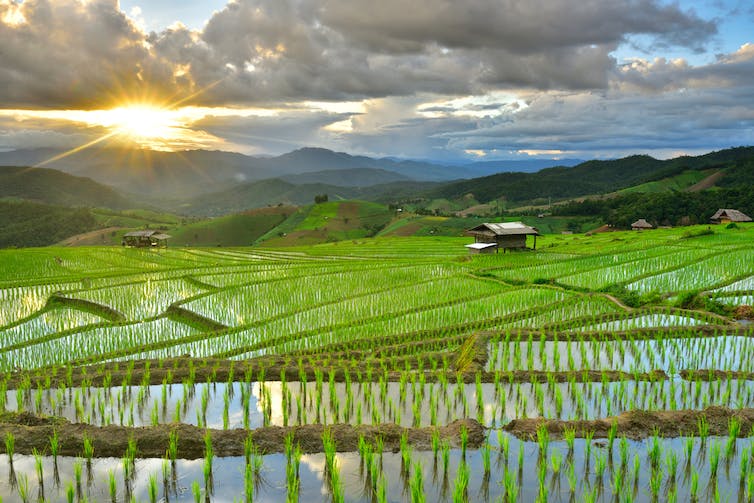 This releases methane to the water, where some is consumed by other types of micro-organisms. Some of it also reaches the atmosphere.

Human-made or human-impacted aquatic ecosystems, on the other hand, increase the amount of organic matter available to produce methane, which causes emissions to rise.

Between 2000 and 2006, global methane emissions stabilised, and scientists are still unsure why. Emissions began steadily rising again in 2007.

There’s active debate in the scientific community about how much of the renewed increase is caused by emissions or by a decline of “methane sinks” (when methane is eliminated, such as from bacteria in soil, or from chemical reactions in the atmosphere).

We looked at inland, coastal and oceanic ecosystems around the world. While we cannot resolve the debate about what causes the renewed increase of atmospheric methane, we found the combined emissions of natural, impacted and human-made aquatic ecosystems are highly variable, but may contribute 41% to 53% of total methane emissions globally.

In fact, these combined emissions are a larger source of methane than direct anthropogenic methane sources, such as cows, landfill and waste, and coal mining. This knowledge is important because it can help inform new monitoring and measurements to distinguish where and how methane emissions are produced. 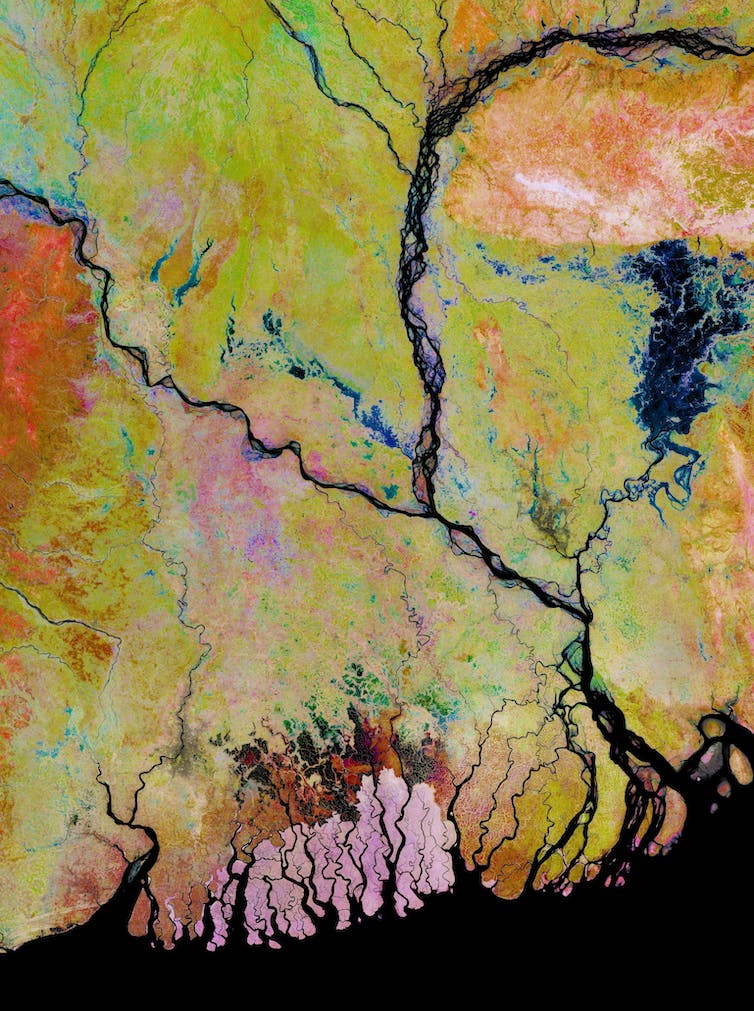 Water is a big part of much of our landscape, from mountain rivers to the coastal ocean. This aerial image shows Himalaya rivers, wetlands, lakes and ponds, and the world’s largest mangrove forest (the Sundarbans) at the coast of the tropical Bay of Bengal. George Allen, Author provided

There is an increasing pressure from humans on aquatic ecosystems. This includes increased nutrients (like fertilisers) getting dumped into rivers and lakes, and farm dam building as the climate dries in many places.

In general, we found methane emissions from impacted, polluted and human-made aquatic ecosystems are higher than from more natural sites. 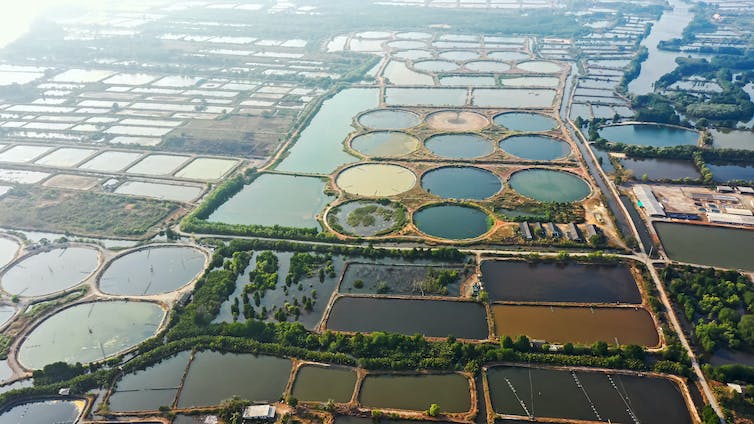 Globally, rice cultivation releases more methane per year than all coastal wetlands, the continental shelf and open ocean together.

The fluxes in methane emissions per area of coastal aquaculture farms are 7-430 times higher than from coastal habitats such as mangrove forests, salt marshes or seagrasses. And highly disturbed mangroves and salt marsh sites have significantly higher methane fluxes than more natural sites.

So how do we reduce methane emissions?

For aquatic ecosystems, we can effectively reduce methane emissions and help mitigate climate change with the right land use and management choices.

For example, managing aquaculture farms and rice paddies so they alternate between wet and dry conditions can reduce methane emissions.

Restoring salt marsh and mangrove habitats and the flow of seawater from tides is another promising strategy to further reduce methane emissions from degraded coastal wetlands.

We should also reduce the amount of nutrients coming from fertilisers washing into freshwater wetlands, lakes, reservoirs and rivers as it leads to organic matter production, such as toxic algal blooms. This will help curtail methane emissions from inland waters.

These actions will be most effective if we apply them in the aquatic ecosystems that have the greatest contribution of aquatic methane: freshwater wetlands, lakes, reservoirs, rice paddies and aquaculture farms.

This will be no small effort, and will require knowledge across many disciplines. But with the right choices we can create conditions that bring methane fluxes down while also preserving ecosystems and biodiversity.