Wesley Enoch’s exuberant return to the Sydney Theatre Company to direct African-American playwright Branden Jacobs-Jenkins’ Appropriate is a wild ride back to the power of live theatre.

This production is a deep dive into contemporary debates in America (and across most settler-colonial societies) about race, racism and its legacy. Jacobs-Jenkins unpicks and restitches the stories held within a white American plantation owning family. The once colonised are (almost) entirely absent from his stage, save for images and unmarked graves that return as haunting.

The estranged and dysfunctional Lafayette family gather in Arkansas following the death of their patriarch and last remaining parent. Accompanied by partners and children, Toni (Mandy Mcelhinney) and her brothers Bo (Sam Worthington) and Franz (Johnny Carr) converge in their father’s dilapidated mansion, overflowing with junk and burdened with debt. An upcoming auction offers the siblings hope of financial windfall, and finalisation of their difficult relationships. 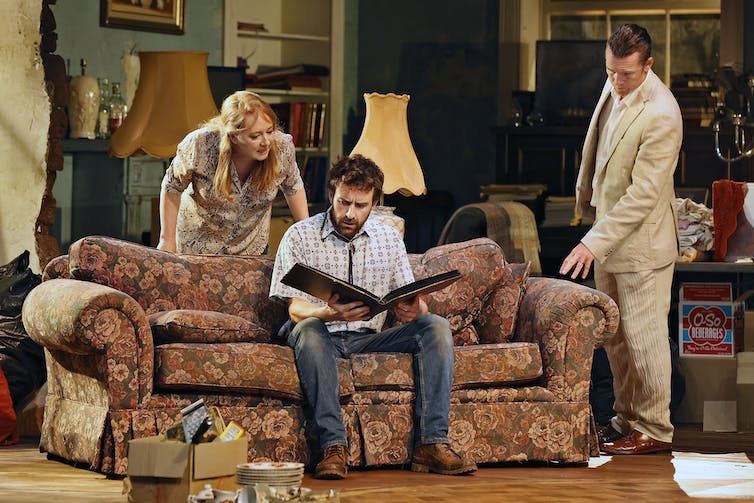 Ghosts have been stored away in boxes and photo albums, but they can’t stay hidden forever. Prudence Upton/Sydney Theatre Company

As we settle in our seats, the lights lower as a chorus of cicadas evoke a smothering, humid southern summer night. The cicada song rises in volume and tempo for longer than is comfortable prompting a murmur through the audience (is this a technical hitch?). The insects hush — but are not silenced — when the plush red curtain lifts. We are perched at the edge of the night-dark living room to bear witness to the acerbic, bigoted and ferocious exchange among the adults.

Outside, nature is closing in.

Ebbs and tides of pain

The family history is disclosed to us piece by piece. Images of lynchings in a discovered album among the detritus cause shock and disbelief for some family members; others are more knowing of the family’s past. Another becomes defensive.

Among the father’s boxed up possessions, the confederate flag spills out. Trophy jars of flesh and bone are revealed: carefully kept family heirlooms from a violently racist past.

These material things unleash the ghosts. Some disgraces are viewed with greater alarm than others; some are denied; some charmingly misconstrued.

All are ultimately unresolved.

Jacobs-Jenkins’ rapid, emotive dialogue is fired from one player at another, rising and falling in rhythm and volume as the cicadas do for the entire course of the play. The writing encapsulates the surges of hurt, loss and love: remembering, forgetting, disavowal, denial and attempted redemption.

The ensemble performs the humorous and abrasive dialogue with magnificent energy.

As Toni, in her madness and grief and denial, McElhinney is outstanding, whipping up the family maelstrom from centre stage. 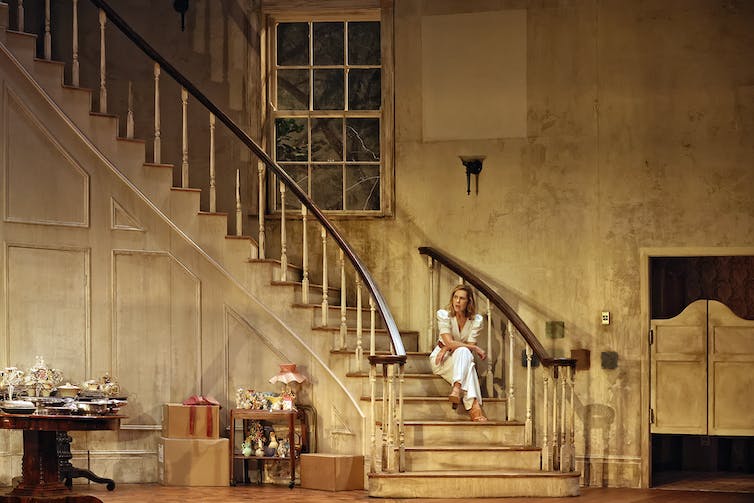 When grief becomes overwhelming, rather than face it, the family stuffs down the pain. Prudence Upton/Sydney Theatre Company

But she is lonely and isolated, in search of a hug that she is only ever able to request — and receive — from her “fuck up son”. The rest of the family manifest their relationships through passionate embrace, squeezed fingertips, faces held firmly or a comforting clutch. After the year we have had, our shared sense of humanity needs to shine through: can somebody give her a hug?

Grief is all around the family; no less so in their losses of position and influence. In the end, all they can do is stuff thoughts and memories deeper down, in vain hope to quell the haunting.

By end of act two, with disgraces laid bare, the families depart in a flurry of torment.

The once grand home filled with material fineries fast decays.

Enoch spectacularly stages a time-lapse passage of night and day. Seasons cycle; the cicada thrum surges and fades. Storms lash the exterior until nature crashes through a window.

Under siege, the grand old house sighs and begins to drop her fineries. The precarity of accumulated wealth is revealed as reliant on the presence of human pride and power. In the absence of humans the weather, the woods, the lake, the unmarked graves of those who have returned to the soil, prevail.

In these final moments, Appropriate seems to suggest this is the end of days for the economic structures and social order that built the United States and the west.In the tight, living room drama of a family in crisis, Jacobs-Jenkins speaks to global themes of truth telling and historical legacy, and ultimately humanity.

Appropriate is at the Roslyn Packer Theatre until April 10.