In the book 25 years of Mushroom Records, published in 1998, Michael Gudinski described himself as “Chairman, Mushroom Group of Companies and music fan”.

There could be no better description of Gudinski, an icon of the Australian popular music industry, who has died at the age of 68. 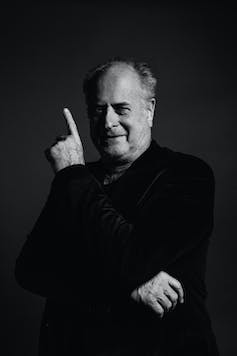 His name is synonymous with the biggest artists in Australia for good reason. Gudinski founded Mushroom Records in 1972. One of its first “big bangs” was a triple album, live recording of the Sunbury Festival. Next came Frontier Touring (founded in 1979) and what would eventually become the Mushroom Group.

Two of Gudinski’s biggest artists from the 1970s, Skyhooks and Split Enz, provided the definitive soundtrack to Australian life at the time.

Skyhooks had a string of hits including the era defining Livin’ in the 70s, while some of the original Split Enz members are still making new music (now with kids and grandkids in tow).

There was no one “sound” Gudinski supported. Instead, a diversity of Australian talent came under his wing: from Archie Roach to Kylie Minogue, Jimmy Barnes to Hunters and Collectors, Deborah Conway to Yothu Yindi. Gudinski received an ARIA “Special Achievement Award” in 1992, and an Order of Australia in 2006.

After the news of his death, artists from around the world paid tribute to Gudinski, from Jimmy Barnes and the Foo Fighters, to Bruce Springsteen, Amy Shark and Marcia Hines.

Victorian Premier Daniel Andrews said Gudinski was “a wonderful Victorian, a great Australian, a very good friend of mine”. Federal Opposition Leader Anthony Albanese said he was shocked and saddened by the news.

Kylie Minogue, one of so many who got their start with him, tweeted: “My heart is broken and I can’t believe he is gone.”

A music promoter, a record label boss, a music publisher, and a screen producer, Gudinski had a particular love of music television in Australia, beginning in the 1970s with Night Moves (which aired from 1976 to 1984). Although most of the original footage of this pioneering music show is now lost, Gudinksi is noted as the show’s “creator” in Tony Harrison’s The Australian Film and TV Companion.

Most recently, Gudinski worked in collaboration with the ABC for its lockdown triumph The Sound, which aired between July and December 2020. The show featured performances from new artists such as Gordi and Miiesha next to established ones such as Minogue and Midnight Oil, as well as “vault” clips from the archives and new tribute collaborations.

As ABC executive producer for The Sound, Janet Gaeta told The Conversation,

It’s a measure of Michael’s love of music and musicians, that when COVID shut down the world, Michael came to the ABC with a bold and beautiful idea; to have Australian artists perform live in empty venues. What eventuated was some of the most hauntingly beautiful performances that sustained and reminded us, in those dark times, of the power and beauty of music.

Gudinski also lead industry charity initiatives such as 2009’s Sound Relief, a multi-city event to support victims of the Victorian bushfires and Queensland floods. Featuring acts such as Coldplay and Midnight Oil performing at both the SCG and MCG, it was broadcast across several networks.

Last year Gudinski developed Music From the Home Front, a COVID-era celebration that brought together artists and audiences in isolation, staged across a socially distanced ANZAC day.

Gudinski leaves behind a multi-generational local music empire (his son Matt is executive director of The Mushroom Group). This includes his most recent venture, Reclusive Records, a label supporting young Australian music talent.

Working to promote Australian music history as well as its future, Gudinski was executive producer for the award winning mini-series Molly in 2016, for which actor Samuel Johnson won a Logie. (In the show, a young Gudinski was played by Aaron Glenane). It featured music from both past and present Mushroom artists. 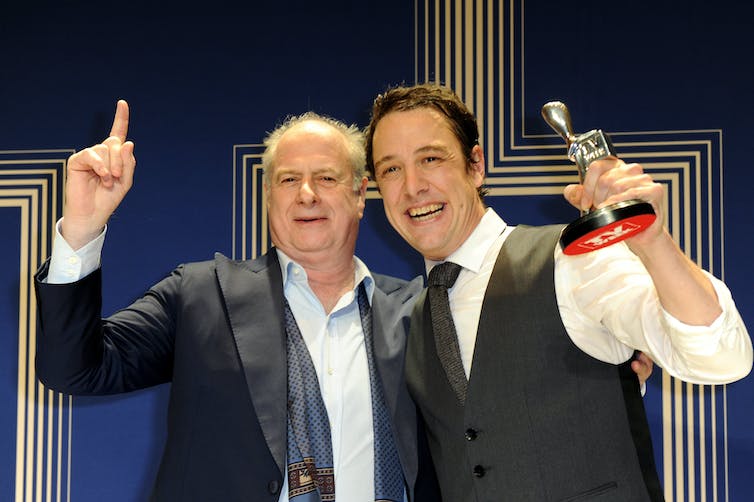 Samuel Johnson, with the Silver Logie for Best Actor in Channel Seven’s Molly, and Michael Gudinski at the 2017 Logie Awards. Joe Castro/AAP

In 2009, the real Meldrum and Gudinski appeared on a 1970s themed episode of the ABC’s Spicks and Specks. The pair playfully bickered throughout the episode, with host Adam Hills teasing them in a final quiz question.

“Who was the most important man in Australian music in the 1970s?” asked Hills.

In reply, Gudinski took to his feet, while Meldrum turned away in mock disgust. The audience and hosts cheered at the achievements of both men.

Although more punters may have recognised Molly’s face and his wonderful ramblings, few could deny Gudinski’s influence during that time and since.