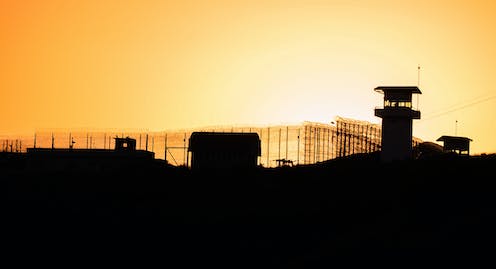 Australian prisoners are regularly subjected to drug and alcohol testing and strip searches.

Each state and territory has rules that allow for drug testing and strip searching in prisons, driven by a desire to maintain security. But they can be arbitrarily applied and this has implications for the human rights of prisoners.

Justice Melinda Richards found human rights considerations had not been taken into account when prison officials established rules allowing for the strip searching of prisoners when being drug tested. This will now place some limits around prison officials’ treatment of prisoners.

However, Richards did state strip searching prisoners when they have contact visits is permitted in the context of a high security prison.

Who is Craig Minogue?

Minogue is serving a life sentence at Barwon Prison for his role in the 1986 Russell Street bombing, which killed Constable Angela Taylor, the first policewoman in Australia killed on duty, and injured 21 other people.

This is not the first time Minogue has sought to challenge the conditions of imprisonment (he did a PhD in prison and bills himself as “the most prominent jailhouse lawyer” in Melbourne). But it is his most successful litigation yet.

What was this challenge about?

Minogue challenged three occasions where he had to have a random alcohol and drug test and be strip searched.

The first two instances were in September 2019 and February 2020, when Minogue was required to provide a urine sample after being strip searched. When Minogue challenged prison authorities, he was told it was a “random general test”, to which 5% prisoners are required to submit each month.

The third instance was also in February 2020, before Minogue was visited by his lawyer. He was told to submit to a strip search, which is standard procedure when prisoners receive outside visitors. He refused because he objected to the blanket nature of the policy.

Read more: No prospect of release: Kevin Crump and the human rights implications of life imprisonment

If prisoners refuse to provide a urine sample, according to the Victorian procedures tendered in the Minogue case, they are “secured in a sterile, secure area” for three hours. The idea is that the prisoner might decide to comply in order to be released from that area.

Minogue argued his human rights under Victoria’s Charter of Human Rights were not properly considered by prison authorities, when they made the rules and directions allowing for random drug and alcohol testing and strip searching.

In particular, he argued the right to privacy and the right to be treated with dignity while deprived of liberty were not mentioned in the Corrections Victoria documents, which describe the regime for strip searching and drug and alcohol testing.

What did the judge say?

Richards found the corrections officials who had made the rules and guidelines about drug and alcohol testing had not taken into account relevant human rights.

There was no examination of the nature and extent of the ‘degrading’ impact of urine testing, and no evaluation of the effectiveness of the random testing regime. Nor was there any consideration of less restrictive means available […]

She added the testing process “is inherently demeaning”.

The arbitrary nature of drug testing was also criticised by Richards, who noted Minogue had no history of drug use. In more than 30 years in prison, he had never returned a positive result.

Richards also observed the Barwon prison authorities had not properly considered the “human rights impacts of strip searching”, and that the rule that every prisoner must be strip searched before a random drug and alcohol test “was not the result of a thorough and well-reasoned human rights analysis”.

Reasonable grounds for some strip searches

However, when it comes to strip searching prisoners before contact visits (as opposed to “box visits” where there is glass separating the prisoner from the visitors), Richards found that in the case of a maximum-security prison like Barwon, there are reasonable grounds to

strip search all prisoners … before and after any contact visit, whether personal or professional.

This is because there is a much higher potential for violence than in the general community, or in lower security prisons and contraband can be brought in during contact visits.

In other words, human rights such as the right to privacy and the right to be treated with dignity when deprived of liberty are balanced against the security rating of the prison.

Minogue’s case is important because it represents a rare win for prisoners in challenging corrections regimes.

Generally speaking, the courts see prison rules as matters for governments to change. But Minogue’s case shows that human rights principles can be applied to prison practices and rules.

Whether the Victorian government will appeal the decision is not yet known and there has been no public comment from corrections officials.

Read more: Over 1,000 Australians with cognitive disability are detained indefinitely each year. This shameful practice needs to stop

In the meantime, it creates new opportunities for them to challenge whether corrections authorities are adequately considering domestic and international human rights laws in the running of their prisons.

Certainly, the use of strip searching and administration of drug and alcohol testing regimes are now vulnerable to similar challenges.

Perhaps the most important feature of Richards’ decision, however, is it reminds corrections authorities that human rights considerations must always be taken into account.

Discipline and behaviour management regimes need to make sure human rights are given more than just lip service.