Alice! A childish story takeAnd with a gentle handLay it where Childhood’s dreams are twinedIn Memory’s mystic band,Like pilgrim’s withered wreath of flowersPlucked in a far-off land.

What is it that draws us back to Alice’s Adventures in Wonderland (Alice for short), both individually and collectively? What is it that makes Alice, in the words of literary critic, Harold Bloom, “a kind of Scripture for us” — like Shakespeare?

For we are drawn back. Since the publication of Lewis Carroll’s story, in England in 1865, it has never been out of print and has been translated into around 100 languages.

There have been numerous movie adaptations and many other works inspired by the story. Perhaps the greatest is a little-known, 1971 short film by the US Department of Health, Education and Welfare encouraging children not to do drugs.

One fears the film might not have had the desired effect: while the speed-addicted March Hare provides a salutary example of how poorly things can go on his drug of choice, the Mad Hatter’s performance on LSD is a little too compelling.

Beyond the page and screen, a quick Google search reveals Alice-inspired art — from graffiti to Dali — tattoos, music, video games and shops.

Alice has strong mainstream appeal; this was entrenched by Disney’s 1951 movie Alice in Wonderland (which is also responsible for people getting the title of the book wrong). However, Alice has become iconic for many subcultures, especially those with darker proclivities. Try exploring “zombie Alice” or “goth Alice”, or watching the new Netflix series, Alice in Borderland, which is set in Tokyo. (Alice is big in Japan).

And this brings us again to the beginning of the conversation (Alice reference here for the boffins): What draws us back?

Read more: Guide to the Classics: The Secret Garden and the healing power of nature

Striking a blow against the adult world

The story begins with bored, seven-year-old Alice sitting on a riverbank with her older sister. Alice doesn’t care for the book her sister is reading because it doesn’t have pictures. She falls asleep and follows a dapper but flustered rabbit down a rabbit hole and into Wonderland.

In Wonderland she moves through a series of surreal vignettes in which she verbally tussles, but struggles to connect with, a stream of characters, such as the hookah-smoking Caterpillar, the Duchess, the Mad Hatter, the Cheshire Cat and the Queen of Hearts. 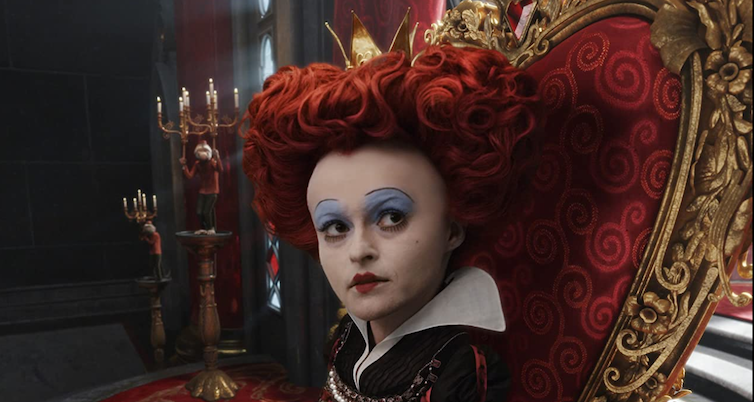 Helena Bonham Carter as the Queen of Hearts in Tim Burton’s 2010 film version of Alice in Wonderland. Disney Enterprises Inc

We are drawn back to the book by the first-rate banter between Alice and these memorable characters. Consider the following from the Mad Hatter’s tea party: 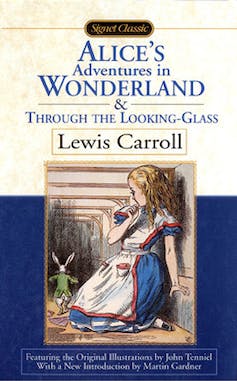 Notably, many of the creatures Alice meets stand for the real adults in her life, in that they scold her, order her about, try to teach her morals and make her recite poetry. It is this transformation of the adult world into a mad place and the elevation of the viewpoint of the child that also draw us back. When we read Alice, not as children, but as adults, we strike a blow against the adult world, which some of us, at least, have never quite adjusted to. The Cheshire Cat provides the greatest indictment of Wonderland-as-adult-world when he says to Alice, “we’re all mad here”. The cat is the only creature in the book who connects with Alice. Mark this, reader: It is the one who can connect with children who is also able to see the world for what it is — mad! A champion of childhood The West does have a long history of romanticising childhood. Wordsworth, in his 1807 Immortality Ode, writes: Heaven lies about us in our infancy!Shades of the prison-house begin to closeUpon the growing Boy. But even if the “romantic childhood” is a creation of bourgeois 19th century England — of the likes of Wordsworth and Carroll — it is a powerful and arguably noble notion. So let us follow it a little farther down the rabbit hole. While Alice is the child-hero of the story because she pushes back against the mad adults in Wonderland, she herself is on the cusp of adulthood. 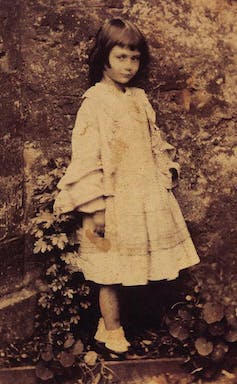 Alice Liddell, photographed in 1862. Wikimedia Commons This tragedy is alluded to in the poem, dedicated to the real Alice — Alice Liddell — with which the book begins (the key stanza appears at the start of this article). Liddell was, in her childhood, Carroll’s friend. The first version of Alice was told to Liddell and her two sisters in 1862 on a boat ride along the Thames in Oxford. 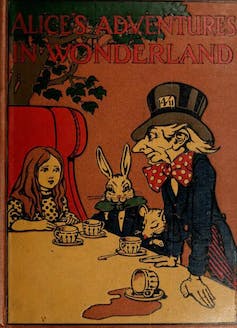 A 1907 edition of the book. Wikimedia Commons The tragedy of growing up is reinforced in the story itself. While Alice’s imagination is able to create Wonderland, it cannot sustain it. In the final scene in Wonderland, Alice is watching a trial where many of the characters are playing cards. Frustrated by the illogical trial, she shouts, “You’re nothing but a pack of cards!” and is transported back to the real world. This leads us to think Wonderland itself is the hero of Alice: the champion of childhood. It is in Wonderland that time has stopped — as we learn at the Mad Hatter’s tea party — and where authority is impotent. Despite the Queen’s repeated edict, “Off with her/his head”, no one ever really dies. ‘The Carroll myth’ 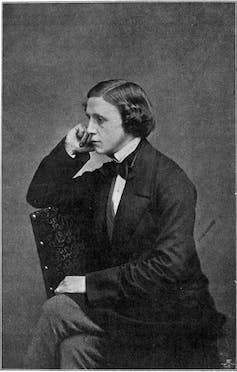 Lewis Carroll aged 23. Wikimedia Commons However, beyond Alice and Wonderland is Carroll himself. As Karoline Leach writes, in her remarkable book about “the Carroll myth”, at the centre of Alice lies, “the image of Carroll; a haunting presence in the story, a shifting dreamy impression of golden afternoons, fustiness, mystery, oars dripping in sun-rippling water.” Lewis Carroll is the pen name of Charles Lutwidge Dodgson (not easy to say quickly, unlike “Lewis Carroll”), who taught mathematics at Oxford. The “Carroll myth”, which was as appealing in the 19th century as it is now, is that Dodgson, through his alter ego Carroll, and his many (chaste) relationships with children, in particular, Alice Liddell, found a way back to the immortality of childhood that Wordsworth spoke about. So, when we read Alice, we are ultimately communing with this mythical Carroll, and this is no small thing. Read more: Guide to the classics: Orwell's 1984 and how it helps us understand tyrannical power today Trolling pieties Beyond the banter and the homage to childhood, we are drawn back to Alice because it contains a timeless contribution to the 1860s version of our own culture wars. Where we have political correctness, the 19th century Anglophone world had its own buzz-killing piety, at times foisted upon children — and adults — through verse. David Bates, a 19th century American poet, is likely responsible for the now thankfully forgotten poem, Speak Gently (“Speak gently to the little child!/Its love be sure to gain/Teach it in accents soft and mild:/It may not long remain.) Carroll’s glorious parody, which is spoken in Chapter 6 by the Duchess, a negligent mother, is: Speak roughly to your little boy,And beat him when he sneezes:He only does it to annoy,Because he knows it teases. Here, and in other Alice poems such as "You Are Old Father William”, Carroll is trolling all those for whom piety is a mask for power. And like the pious, the politically correct are more concerned with their own superiority than with doing good. 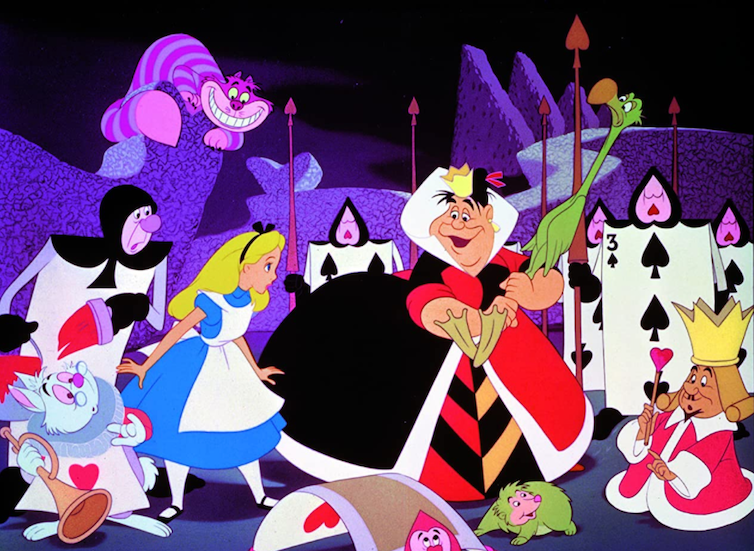 An image from the 1951 film version of Carroll’s book. Walt Disney Animation Studios, Walt Disney Productions To cement the link between then and now, it is worth quoting from Stephen Fry’s recent objection to political correctness. It is as if Fry is providing us with the key to Alice and even to Carroll himself. “I wouldn’t class myself as a classical libertarian,” Fry says, but I do relish transgression, and I deeply and instinctively distrust conformity and orthodoxy. Progress is not achieved by preachers and guardians of morality but […] by madmen, hermits, heretics, dreamers, rebels and sceptics. We are drawn back to Alice’s Adventures in Wonderland because when we read it, we become the heretics, dreamers and rebels who would change the world.