The Members’ Hall of Parliament House is home to the 25 completed portraits of Australia’s former prime ministers. The most recently revealed was of Julia Gillard in 2018, painted by Vincent Fantauzzo, a five-time People’s Choice Award winner at the Archibald Prize.

Indeed, every official prime ministerial portrait has been...

The Members’ Hall of Parliament House is home to the 25 completed portraits of Australia’s former prime ministers. The most recently revealed was of Julia Gillard in 2018, painted by Vincent Fantauzzo, a five-time People’s Choice Award winner at the Archibald Prize.

Indeed, every official prime ministerial portrait has been painted by an Archibald finalist, including some by artists who were awarded the main prize.

This will change with Tony Abbott’s reported decision to appoint the Australian’s editorial cartoonist Johannes Leak to paint his official portrait. Leak does not have any track record of exhibiting works on a large scale, let alone portraits.

Johannes Leak’s heavy-handed cartoons are in the style of his father’s last years, the work undertaken after he suffered serious head injuries after a fall. There is a general consensus that Bill Leak’s later cartoons are markedly inferior to the work he did in his prime.

The website for the Bill Leak Gallery carries the following statement:

Bill Leak’s son Johannes has taken over the family business and is now the daily editorial cartoonist for The Australian, the position held by his father for 23 years.

This is unusual. I cannot think of another Australian political cartoonist who inherited their position. Traditionally our leading cartoonists come from a rigorous and contested culture of freelance drawing, a tradition that goes back to J.F. Archibald’s Bulletin magazine, first published in 1880.

Along with his father’s platform, Leak junior has also taken over the title Australia’s most condemned cartoonist.

The cartoonist and the painter

There is of course no contradiction between a cartoonist also being an artist.

Norman Lindsay was the star cartoonist for The Bulletin, pleased at the steady income that gave him time for more serious work. 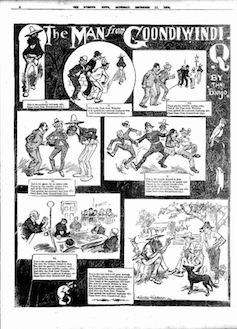 In the early part of last century, his brother Lionel Lindsay — best known for his etchings and wood engravings — was for many years cartoonist at the Evening News, appointed by the editor Banjo Paterson as well as drawing the popular Chunderloo cartoon series for Cobra boot polish.

In the 21st century, Jon Kudelka, the cartoonist at the Saturday Paper, is also well-known as an exhibiting artist.

Read more: Friday essay: it's not funny to us – an Aboriginal perspective on political correctness and humour

Bill Leak’s larrikin sensibility combined with his Archibald success is presumably why he was commissioned to paint Bob Hawke’s official portrait for Parliament House. It is a curiously dull grey painting of a colourful character. There is something quite odd about the way the head doesn’t quite fit the body, almost as though there were two different models. 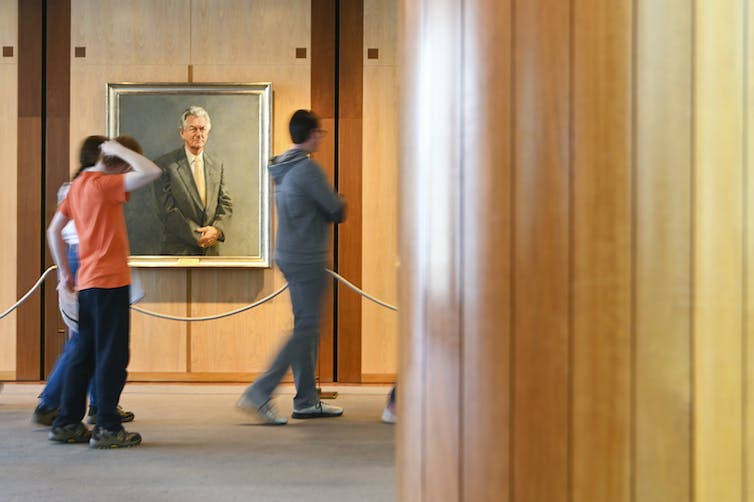 The difference between Bill Leak’s portrait of Hawke and his son’s commission to paint Tony Abbott is Leak senior’s track record as an exhibiting artist.

But is it art?

Fortunately for Johannes Leak, whatever he paints will fit the legal definition of portrait. For this we also have to thank the legacy of J.F. Archibald.

Archibald died a wealthy man. His charitable gifts included a benevolent fund for the relief of distressed journalists and the Archibald Fountain in Sydney’s Hyde Park. But his best known legacy was to the Trustees of the New South Wales National Gallery, providing an endowment to create The Archibald Prize.

For many years when it came to judging the prize, the trustees — more or less evenly divided along the same kind of factional lines usually seen in political parties — took turns in deciding who would be awarded the lucrative honour.

In 1943 this changed. A conservative trustee died and was replaced with Mary Alice Evatt, a modernist artist who happened to be the minister for education’s sister-in-law.

The prize was awarded to William Dobell for his portrait of his friend the artist Joshua Smith. Two artists aligned with the Royal Art Society (and not so secretly supported by the conservative trustees) sued on the grounds it was not a portrait, but a caricature. 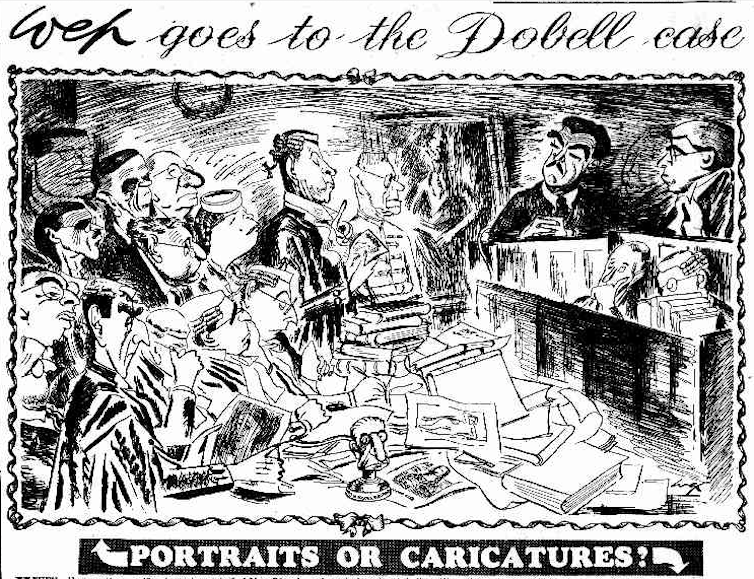 This cartoon of the trial, published in The Daily Telegraph, October 1944, was drawn by W. E. Pidgeon (aka Wep) who later won the Archibald Prize three times. Trove

The plaintiffs’ most trenchant witness, the art critic J.S. MacDonald, claimed the portrait was “a pictorial defamation of character” and a “satirical caricature”. Under cross-examination he admitted he had written his critique without seeing the work in question.

As well as giving a verdict in favour of the trustees and the gallery, Justice Roper noted the considerable public interest in the matter, so added for good measure a definition of portraiture yet to be seriously contested:

The word “portrait” … means a pictorial representation of a person, painted by an artist. This definition denotes some degree of likeness is essential and for the purpose of achieving it the inclusion of the face of the subject is desirable and perhaps also essential.

Johannes Leak could paint the silliest, crudest portrait of Tony Abbott and it would still be defined as a portrait. It is, however, more likely he will paint a large acrylic or oil painting on canvas.

My prediction is the subject will be depicted wearing a grey suit and sporting a light blue tie — rather than Abbott’s infamous red budgie-smuggler swimming trunks. It will almost certainly include a face.