Wrapped in COVID Safe vigilance, Australian theatre has cautiously begun to welcome back guests. The Sydney Festival withstood border closures and local outbreaks to offer a wide variety of events to summer revellers in the open air, online and in theatres. The Perth festival has scrambled to reschedule performances after the city’s short, sharp lockdown. Across the nation, performers are still holding their breath.

In Victoria, they must remain two metres apart when rehearsing or performing and singers must wear masks. In NSW, no more than five singers should perform indoors and they should face outwards. Arts special interest groups have prepared useful, if complex, tables of state-by-state rules and restrictions.

My first trip back to theatre in person was The Picture of Dorian Gray late last year. It was strange not being able to enjoy a pre-show drink in the foyer and the sea of masks in the audience was an unsettling sight. Uncannily, the one-woman show conveyed isolation in a social world obsessed by appearance. I found it a bit hard to breathe in the auditorium.

Inspiration — meaning both to draw breath and the power that brings forth creativity — has always been integral to theatre and performance. Of course, the two are intimately linked.

Read more: The power of proximity and the theatre of touch: what losing live audiences may mean for theatre

Breath is one of the few functions of the body that can both occur automatically and also be controlled consciously, although we still have so much more to learn about it. 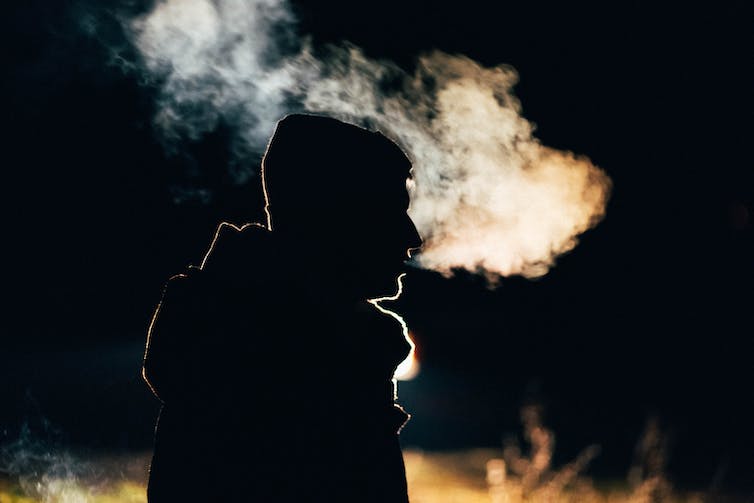 These days, we are more consciously aware of breath. Pavel Lozovikov/Unsplash, CC BY

Inspiration literally means to “breathe in”, as the atmosphere of the outside world enters into our body. In theatrical terms, breath has long been harnessed to fuel an emotional connection with an audience.

First century CE Roman orator and teacher Quintilian tells a devastating story of his own grief when he breathed in the last exhalation of his dying son. The act was driven by the belief that it would allow his child’s spirit to live on in his own body, a reversal of a practice whereby sons would do this for their parent.

Quintilian went on to develop a theory of rhetoric and the communication of emotion. His 12-volume Institutio Oratoria established the theory and practice of rhetoric, and provided a lifelong manual for the public speaker.

The key point is that in order to convey emotion, you first need to feel it yourself and then transmit it through breath.

Centuries later, Constantin Stanislavski, Russian director and founder of modern acting, drew on the theory of breath in yoga.

Stanislavski’s approach — which later developed into Method Acting employed by players from Marlon Brando, Daniel Day-Lewis, and Angelina Jolie to the late Heath Ledger - uses prana breath and visualises the different parts of his system as a set of lungs.

Around the same period, avant-garde French theatre theorist Antonin Artaud wrote about a “hieroglyphics of breath” whereby performers can communicate directly with the audience through a language of breathing grounded in nature.

In contrast, the modernist playwright Samuel Beckett did away with actors altogether in his one-minute play Breath, which consisted of a pile of rubbish, lights fading up to the sound of a baby’s first cry and then fade to black. The body is cut off from breath.

If we take theatre’s origin to lie in religious ceremony, it is worth noting the role that breath plays is crucial to rituals too. In the Christian tradition, The Holy Spirit is depicted as a divine and invisible breath that can enter one’s body.

In Islam, the Qu’ran is a set of practices intended to keep the lungs healthy, in one sense.

In Buddhism, practices of the breath can illuminate the world like a moon freed from a veil of clouds. 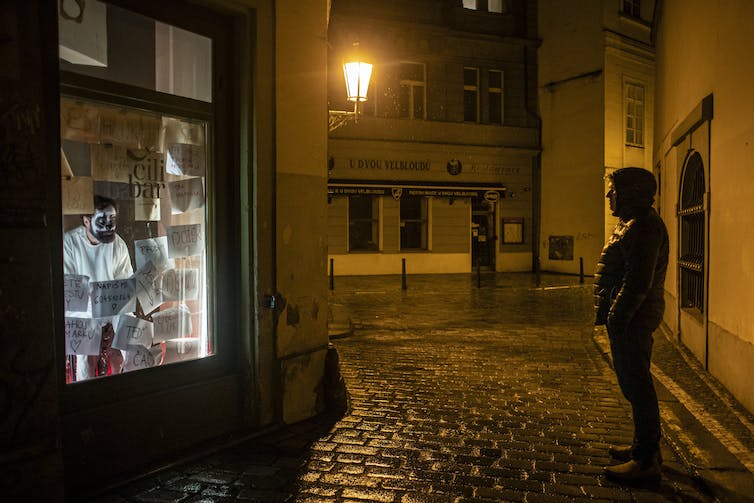 A recent circus performance in Prague separated performers behind shop windows to keep everyone safe from coronavirus. EPA/MARTIN DIVISEK

In physical terms, singing and dancing bring a group’s breath in sync and increase oxygen to the brain with positive effect.

To breathe the same air in an intimate space brings us close together. Theatre and performance afford that opportunity.

For now, we must be safe but the precautions will be worth it. As Shakespeare’s Romeo says,

Ah, Juliet, if the measure of thy joy

Be heaped like mine, and that thy skill be more

To blazon it, then sweeten with thy breath

Unfold the imagined happiness that both

Receive in either by this dear encounter

We will wait a bit longer for such a close encounter of breath again.