The only moment bodies touch in Force Majeure’s austere The Last Season comes like an urgent heartbeat. But an embrace between an adult and a child that ought to comfort appears to suffocate and smother, the larger body controlling the other like a puppet.

This sinister touch feels all the more despairing in the context of a pandemic that prohibits tactile exchange, as if touch between people — our last recourse to feeling safe and loved — has lost its goodness.

If touching harms, is there still hope?

The Last Season, directed and choreographed by Danielle Micich in collaboration with Force Majeure’s Youth Company of dancers aged 9 to 14, explores themes of evolution, productivism and care (or rather, a lack of care — or a “crisis of care”, as feminist philosopher Nancy Fraser would put it).

The title is a nod to Vivaldi’s The Four Seasons, to which the work is set and responds. But The Last Season is also a metaphor for the ending of life.

The world before the fall

Micich crafts a world of curious creation and ultimate destruction. Sublime live music by Kelly Ryall colours this world, and words by Tom Wright bring it into being. Damien Cooper’s lighting oscillates between a longing for tenderness and a sense of cold, harsh obstacles.

Pear-shaped sacks hang from the ceiling over the stage. Gentle string music caresses the expansive space, revealed by a soft wash of light: a dreamy new dawn.

The sacks swing like church bells or gumnuts in the wind. Like calves being released from the womb in an amniotic sac, children fall one after the other onto the floor. They wriggle and writhe on the ground.

And so the story starts. 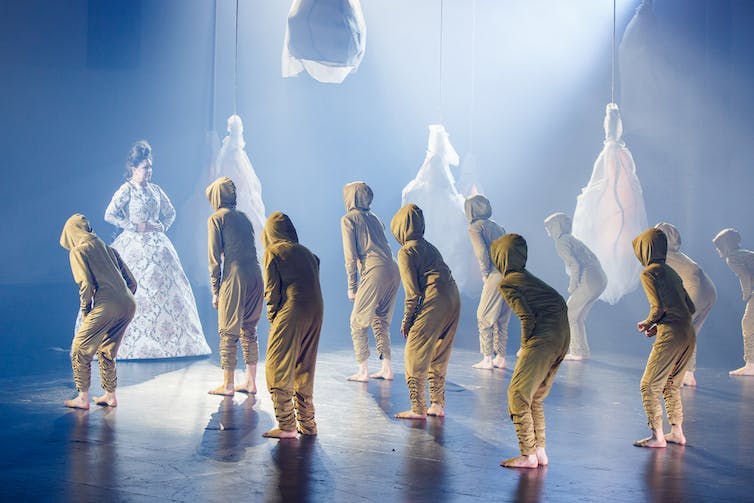 Pamela Rabe instructs the children in their performance and their maturation, like an old-fashioned headmistress or a strict grandmother. Yaya Stempler/Sydney Festival

An ethereal figure, exquisitely played by Pamela Rabe, materialises centre-stage before the budding tribe. She floats across the stage. Her movement is balletic, her posture regal.

She instructs her students like an old fashioned headmistress or a strict grandmother: “Good. Very good. I am pleased with your learning,” she says.

Dictating the children’s steps, she teaches her class (and the audience) about her purported purpose — to educate these children, she says, into “forces of good.” 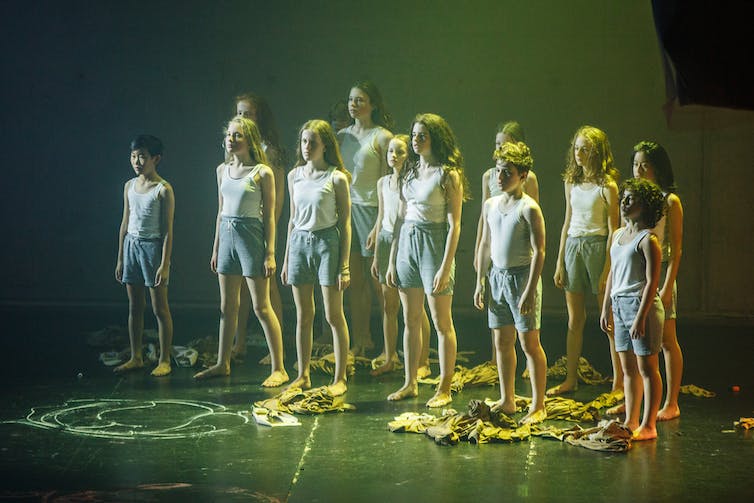 As the children mature, they shed layers of their costumes. Yaya Stempler/Sydney Festival

When Rabe exclaims with joy “It’s a labour of love!” I am reminded of the philosopher Eva Feder Kittay’s writings on “dependency work.” Kittay argues dependency is a feature of the human condition: we are all interdependent.

In a lapse of attention, the grandmother character exposes her ego, foreshadowing a rebellion — the children’s dependence on her is doomed to shift.

Comic relief comes in the form of an androgynous weary diva performed with warmth and flair by Paul Capsis. 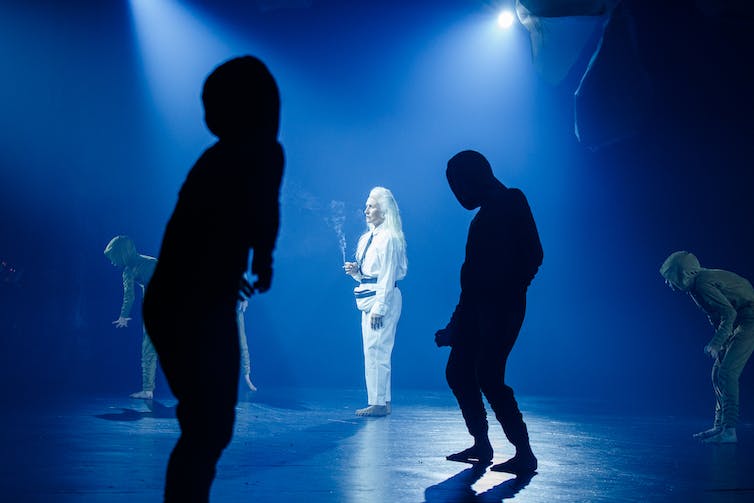 Later, a white-haired wise woman, stunningly portrayed by Olwen Fouéré, strikes the stage like lightning, her beaming white clothing with a black belt evoking a sensei.

She smokes a cigarette in the stillness.

Realising her doomed future, Rabe comes to understand the children are not just hers to direct — they can make their own choices. “I think they can make,” she whispers.

But isn’t creating and producing ultimately good? Why the concern?

Then, I wonder what this production is really asking: where humankind’s over-productivity is causing climate change, is making bad?

In an interview, the director Micich said: “I’m interested in what things we remember and hold onto as value.”

While I am watching, I find myself asking what is the value of being productive? Who benefits? The teacher cares for the children and raises them to be productive but — crucially — on her terms. So what does the teacher value? Mimetic cooperation? No answers are forthcoming. 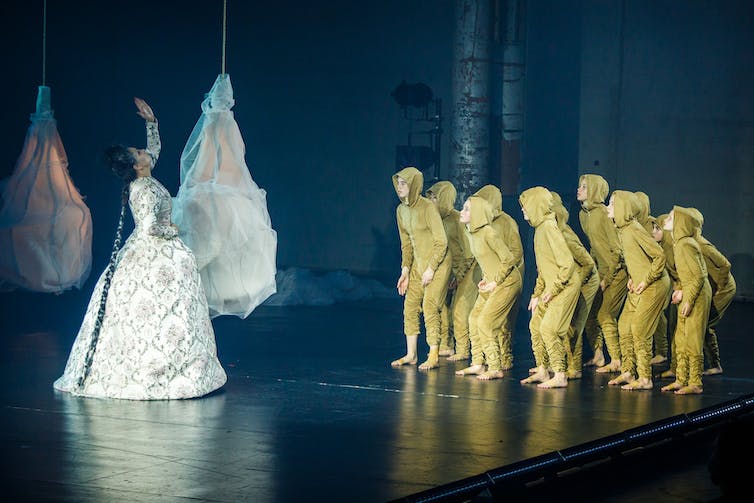 Much of The Last Season is a stimulating, but it is ultimately let down by a disjointed narrative. Yaya Stempler/Sydney Festival

Ultimately, the ideas The Last Season explores are overly abstracted, making the work hard to follow.

But the process of children making art together with adults, as James Thompson explains in his theory of an “aesthetics of care”, is a demonstration of the interdependence that lends performance its strengths.

I wasn’t moved by the characters in this piece, but these performers, particularly the youth company, constituted the hope I was searching for: when the cast took their bows, I was delighted (and relieved) to see the children smile.