Two years ago, on a warm Broadbeach night strolling back to our hotel, my teenage daughter gathered up what we were thinking in eight words: “That was the best night of my life”.

We had travelled south from Brisbane to see show number 141 of a 143-date world tour of David Byrne’s American Utopia.

It takes a lot to prise us loose from our suburban setting, but memories of Talking Heads’ first Australian tour came back into focus and gave me a nudge.

The Festival Hall show in the winter of 1979 had been sharp and groovy. A gaggle of us walked the two blocks back to their hotel with the band. I followed Byrne into the lift, where we suffered in pained silence until his floor. I was too shy to speak.

Back in the bar with the rest of the band, bottles of red wine and my silly, punky buddies I was probably loquacious as hell.

The Byrne on stage in Broadbeach was 40 years older but no less energetic or committed. The energy was different — smoother and more focused than the frenetic twitch of the 70s — but the commitment was clear.

This show was a transformation. A new way of looking at live music.

A bare stage. An oblong light illuminates Byrne on a basic wooden chair, his hands flat on a wooden table framing a human brain.

The music delicately builds as he lifts the brain and sings:

Thin cables raise mounds of chains gathered on the floor. A set has been created: three walls of shimmering metal curtain.

The breadth of the show — the shape and swing of it — are captured in shots from the audience’s perspective. Precise overhead shots of the stage provide neat patterns of light and movement. But, edited by Adam Gough, it is the feeling of being onstage with the performers, the close-ups and crane shots, which bring this remarkable story home.

Byrne and his band come and go through the walls, barefoot, in matching grey suits and shirts. After the opening of Here, the band are slowly revealed through slices of the Byrne/Talking Heads catalogue. Beautiful versions of Don’t Worry About the Government, This Must Be the Place (Naïve Melody) and then I Zimbra, when the whole band finally appears onstage. 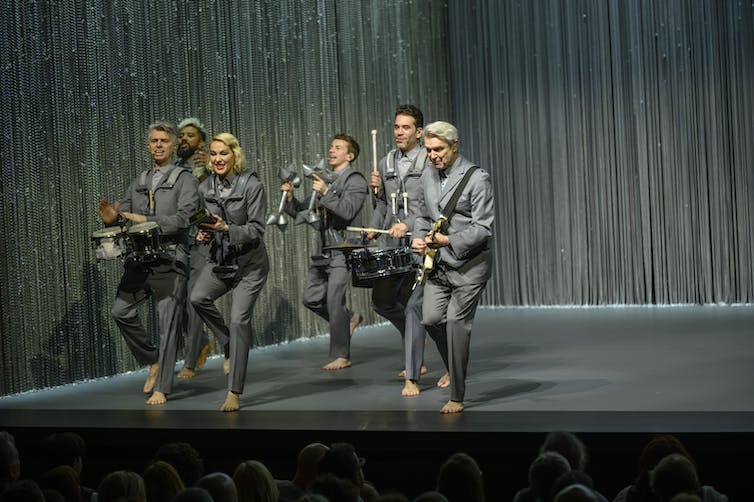 There are five drummer/percussionists, guitar, bass and keyboards, two wonderful singers and Byrne. All are “untethered” as he describes it later – wireless mics and marching band rigs allow them to be anywhere, redefining the idea of what a band onstage looks like.

There are some songs, like The Bullet or One Fine Day, which have a slow, almost static quality, but mostly the movement is constant. Annie-B Parsons’ choroeography is delightfully appropriate to Byrne’s style, and as intrinsic to the film as the music. 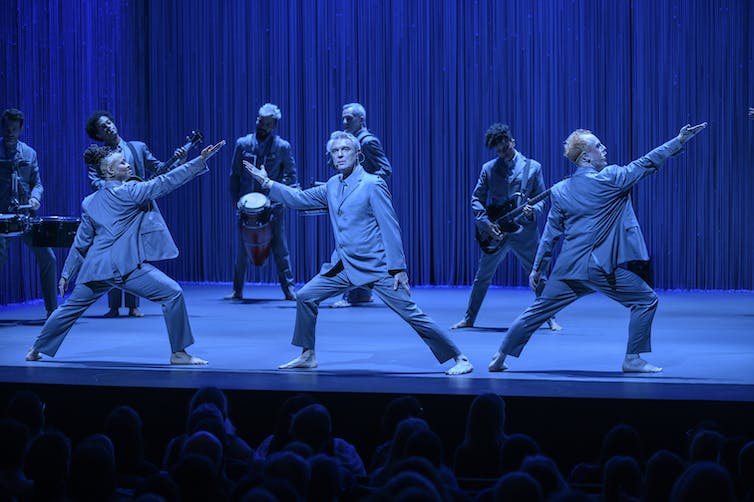 The choreography is a delight; the movement is mesmerising. Universal Pictures

Somewhere around the middle of the film, he is thrown into the spotlight — a floppy man, a rag doll — for Once In A Lifetime. People on stage sway and swoop, sometimes chaotic, sometimes ordered and symmetrical.

The constant movement is mesmerising, often with Byrne at the centre and the players snaking and skipping around him.

As in Johnathon Demme’s 1984 concert film Stop Making Sense, Byrne has much to say.

He carefully illustrates the importance of voting, asking people to register at the table in the foyer. He tells the story of Kurt Schwitters’ Ursonate, and of Hugo Ball’s poem Gadji beri bimba which became I Zimbra. He remembers Janelle Monáe singing Hell You Talmbout at the Women’s March on Washington in 2017 before performing his own powerful version.

Lee makes this moment bigger and stronger by cutting in pictures of the names being spoken: relatives holding up the faces of their murdered sons and daughters on an empty stage.

But what resonates most with me, maybe because it feels so personal, is the thread which begins with the brain in Here. We start life with a myriad connections between the hemispheres, discarded as we grow and we make choices on our way.

As the show comes to a close, Byrne proposes these connections, seemingly lost, can be reconstructed in our relationships with others; that music and performing are his way of rebuilding those potent connections with which we are born.

American Utopia had a profound effect on audiences around the world. The movie honours that love. Lee has created a live performance film that can sit up there happily with the best of the genre. 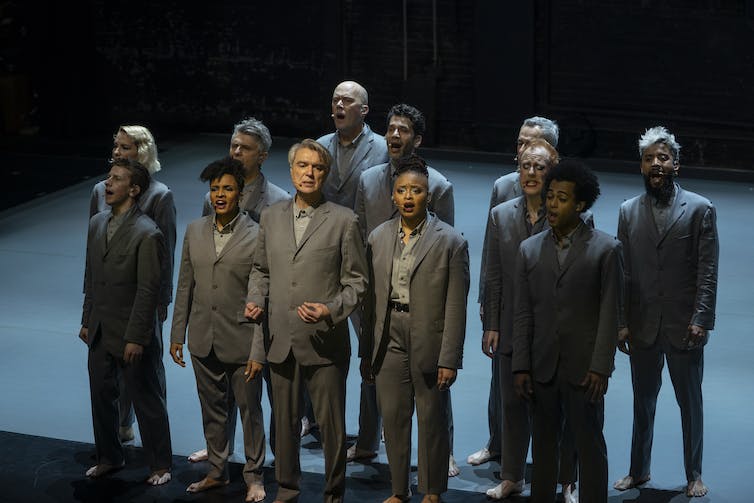 As real as the relationship between artist and audience can be. Universal Pictures

And then the chains rise and disappear, leaving black walls and the band onstage singing the beautiful a capella introduction to Road to Nowhere. Then the instruments kick in and they slide off the stage and around the theatre, making the connection between performer and audience as real as it can be.

The song finishes, Byrne hooting and high-fiving the audience, and looking genuinely happy as he exits the stage door on his bicycle, heading off into the chilly New York night.

My kid was right. That was the best night of my life.

American Utopia is in Australian cinemas from today.