In 2017, when a biology professor in a state college in Washington protested against a proposed day-long ban on the presence of white students on campus, radical students shut the campus down.

The ban was part of a yearly college event designed to give black and minority students and staff a separate space in which to discuss the issues they face. Tensions were high that year. White nationalist groups had invaded the campus, targeting black students and members of staff.

The comments by the professor, Bret Weinstein, and his opposition to the colllege’s equity programs, led to campus protests against him. In protest against the failure of the college administration to quell the students, he resigned from his job.

Helen Pluckrose and James Lindsay, the authors of the new book Cynical Theories: How Universities Made Everything about Race, Gender, and Identity – and Why This Harms Everybody regard Weinstein as a victim of an ideology they call Social Justice Theory.

They hold humanities departments responsible for bringing it into existence, and their aim is to explain why it is so pernicious.

Read more: Is 'cultural Marxism' really taking over universities? I crunched some numbers to find out

Pluckrose, a US magazine editor who describes herself as an exile from the humanities, and Lindsay, a mathematician and writer on politics and religion, were participants in the controversial 2018 Grievance Studies project, which aimed to discredit gender and race studies by submitting hoax articles to academic journals. 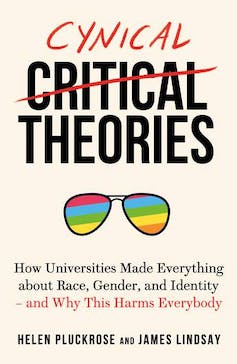 By getting articles on bogus topics through the reviewing processes of respected journals and into print, the authors believed they were proving that studies focusing on identity issues are “corrupt” and unscientific. One hoax article, published in a journal of “feminist geography” looked at “human reactions to rape culture and queer performativity” at dog parks in Portland, Oregon; another purported to be a two-year study involving “thematic analysis of table dialogue” to explore why heterosexual men like to eat at Hooters. Critics of their hoax quickly pointed out there was no scientific evidence to suggest that journals in fields focusing on identity are corrupt — indeed such hoaxes had happened in other areas of study too. Pluckrose and Lindsay’s book, which grew out of the 2018 project, traces the evolution and growing influence during the late 20th century of theories about how the language we use to think and talk about the world structures our relationships. The book takes aim at postmodern and post-structuralist thinkers, particularly the French philosopher and historian Michel Foucault. The authors blame him for propagating the view that all discourses, including science, create relations of power and subordination. Read more: Explainer: the ideas of Foucault 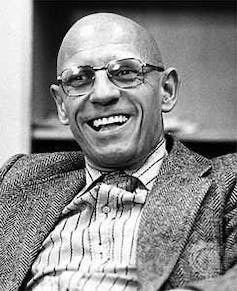 Michel Foucault. Goodreads In the new millennium, these postmodernist and deconstructionist projects morphed — according to Pluckrose and Lindsay — into the political weapon they call Social Justice Theory, or simply Theory. In Cynical Theories, the pair trace the march of Theory as a political ideology through post-colonial studies, queer theory, feminism, and studies of race, disability and body size. In their view, Theory is a harmful, anti-scientific ideology. It divides society into the oppressed — whose subordinate identities are constructed by hierarchies of power — and the oppressors who, wittingly or not, maintain oppressive relationships through their participation in political and social discourses and institutions. Constructed identities This Theory is cynical, according to the authors, because it finds oppression everywhere — even in the best intentions of progressive people and their movements of reform. And it is bad for everyone, including disadvantaged groups, they say, because it gets in the way of an empirical approach to understanding and correcting social ills. 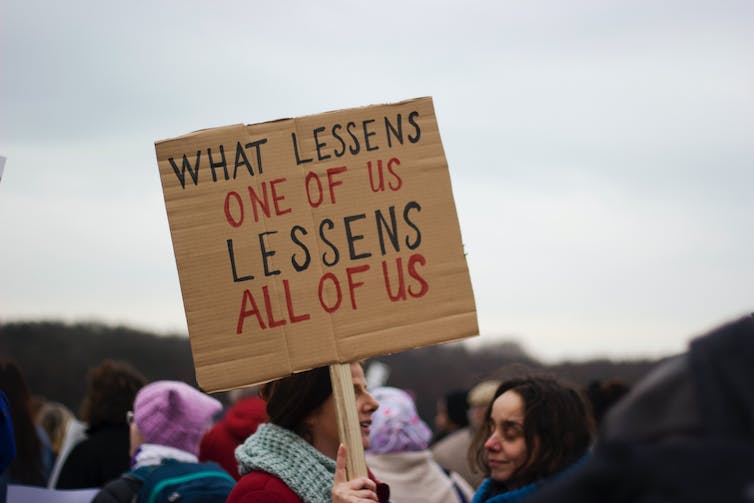 Social Justice Theory, say Pluckrose and Lindsay, finds oppression everywhere. Micheile Henderson/Unsplash One aim of Pluckrose and Lindsay is to defend the central liberal value of freedom of inquiry against what they regard as an attack on free speech by the rise of identity politics — spawned by Theory. The application of Theory is also harmful, they say, because it provokes a backlash from people who cannot understand why being white or male puts them into the camp of racists or sexists. The result, they argue, is a racial politics that becomes increasingly fraught. We hear that: racism is embedded in culture and that we cannot escape it. We hear that white people are inherently racist. We are told that only white people can be racist. […] Adherents actively search for hidden and overt racial offences until they find them. According to the authors, these categories — race, sex, gender, being gay or straight, abled or disabled, fat or of normal body size — are forced onto individuals by the organising power of dominant discourses in politics, social life and science. 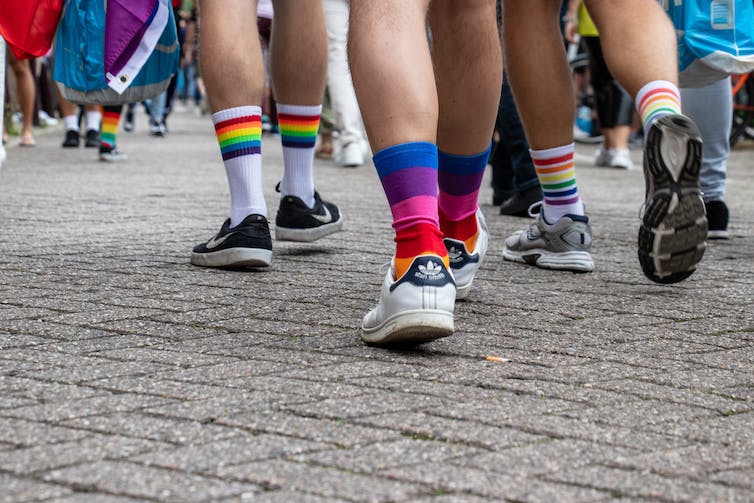 According to Social Justice Theory, the authors write, identity determines how a person thinks, acts and what she knows. Angela Compagnone/Unsplash Adherents of Theory, they say, then argue these constructed identities are, nevertheless, real and inescapable experiences. For Theory, identity determines how a person thinks, acts and what she knows. A black person is not an individual who happens to be black. Blackness is central to who he is. Being black makes him into a victim of discourses that privilege whites. Respecting the standpoint of those who have a subordinate position in hierarchies created by the ways we speak and act — blacks, women, people with minority sexual identities, victims of colonial power, the disabled and the fat — is a key political demand for activists influenced by Theory. No truth, only discourse Social hierarchies exist. Prejudice can be perpetuated by the unthinking behaviour of individuals. Discriminatory treatment of women and black people is sometimes embedded in institutions. Pluckrose and Lindsay do not deny this. They admit legal reforms have not eliminated racism, sexism and other forms of discrimination. They recognise discriminatory treatment and prejudice can blight the lives of victims and undermine their ability to access the opportunities of their society. 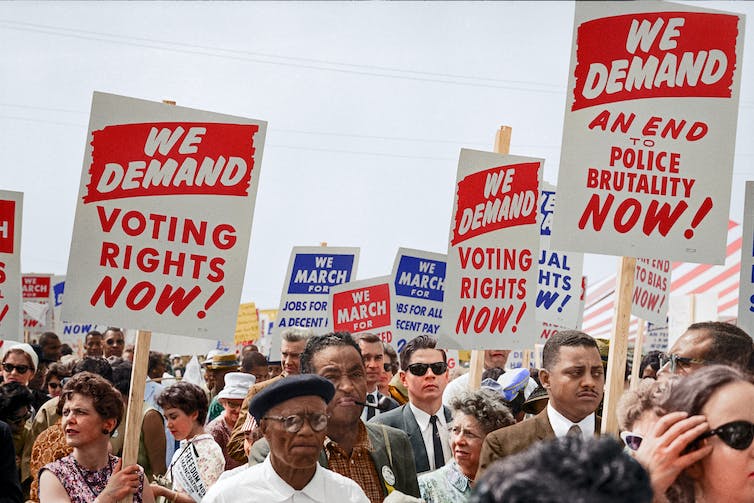 Cynical theories acknowledges legal reforms have not stopped discrimination. Unseen Histories/Unsplash What, then, is wrong with what they call Social Justice Theory? The authors’ main contention is that Theory is relativist and unscientific. For its theorists, there is no objective truth — only the perspectives of people with different identities. And they demand the same respect for the standpoint of an oppressed group as for the views of scientists. Pluckrose and Lindsay write: It is no exaggeration to observe that Social Justice Theories have created a new religion, a tradition of faith that is actively hostile to reason, falsification, disconfirmation and disagreement of any kind. Because Theory is a faith, it can insulate itself from criticism, say the authors. It can dismiss dissenters, like the aforementioned biology professor, as the purveyors of an oppressive discourse. ‘Cancel culture’ Is Social Justice Theory as pernicious as Pluckrose and Lindsay want us to believe? Their criticism gets most of its plausibility from applications of Theory that do seem harmful and even absurd. Disability, for instance, is not merely a social construction. Treating it as such may prevent the use of treatments that could make the lives of people better. When doctors tell obese people they should lose weight they are not engaging in an act of oppression, but in healthcare. Pluckrose and Lindsay are right to point out that campaigns to expose oppressive speech and behaviour can cause unjustified harm to individuals who are called out and “cancelled” for minor misdemeanours, or for stating a view that identity activists deem unacceptable. The abuse heaped on J.K. Rowling, author of the Harry Potter series, for saying that sexual differences are real and not constructed by discourse is an example. 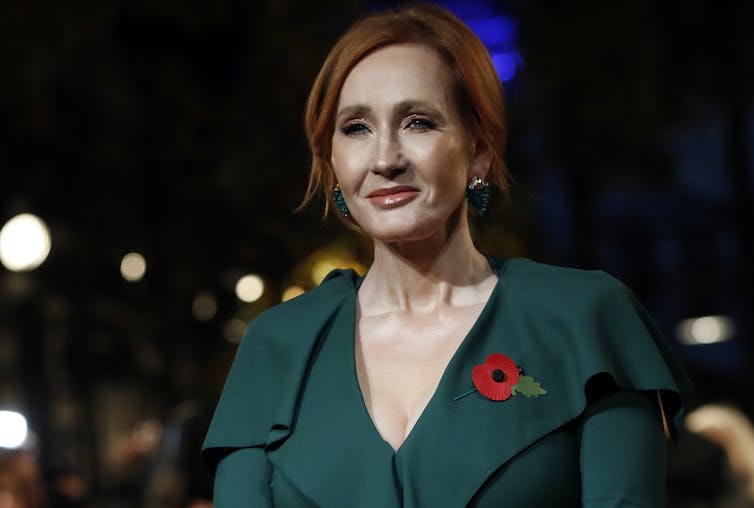 J.K. Rowling has been abused for her stance. Christophe Ena/AP Read more: Is cancel culture silencing open debate? There are risks to shutting down opinions we disagree with In my opinion, however, the authors overstate both the illiberal tendencies of Theory and its influence on culture. You do not have to be a relativist to think the opinions and feelings of people from minority groups ought to be respected. You are not anti-science if you think scientific research sometimes ignores the needs and perspectives of women and minorities. Advocates of Theory aim to make institutions more inclusive and respectful of differences. Liberals — as advocates of critical engagement — should be open to the possibility that Theory, despite faults, has detected forms of prejudice our society tends to overlook. The question of universities The most problematic aspect of Pluckrose and Lindsay’s book is the blame it heaps on humanities departments of universities for stirring up a cancel culture and the culture wars. This gives ammunition to those who want to defund humanities and discourage students from taking humanities courses. It gives support to the position of the Australian Federal Education Minister, Dan Tehan, who thinks that Australian universities have succumbed to a left-wing culture that “cancels” conservatives and their opinions. 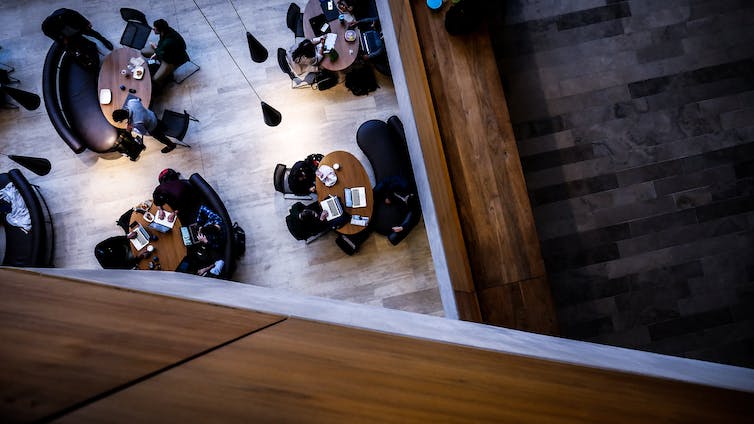 There is scant evidence of a freedom of speech crisis on Australian campuses. Jordan Encarnacao/Unsplash This accusation, also made by conservative groups like the Institute of Public Affairs, is the reason why critics of universities want to force them to sign up to a free speech code. But according to Glyn Davis, Professor of Political Science at the Australian National University, there is no evidence of a meaningful or growing threat to free speech in Australian universities. Read more: Special pleading: free speech and Australian universities Those who emphasise the dangers of a cancel culture often ignore more serious threats to universities and an open society. The students at the Washington college were reacting to the presence of groups that threatened the safety of black students. They were responding to a real threat. Combatants in the war Pluckrose and Lindsay agree that threats to free speech can come from the right as well as the left, but their preoccupation with the latter indicates where they want to put most of the blame. Cynical Theories is, on one hand, a scholarly book. Pluckrose and Lindsay are well versed in the literature they criticise, as their participation in the Grievance Studies hoax indicates. Their book provides an in depth discussion of the works they want to criticise. Their critique of what they call Social Justice Theory deserves to be taken seriously. But by overstating their case and aiming their weapons at humanities and universities they cannot pass themselves off as objective contributors to a search for truth. They are combatants in the culture wars. Cynical Theories: How Universities Made Everything about Race, Gender, and Identity – and Why This Harms Everybody, by Helen Pluckrose and James Lindsay, is published by Swift Press.