The return of the La Niña weather pattern will see a wetter spring and summer in many parts of Australia.

We know mosquitoes need water to complete their life cycle. So does this mean Australia can expect a bumper mozzie season? How about a rise in mosquito-borne disease?

This depends on a range of other factors, including local wildlife, essential to the life cycle of disease-transmitting mosquitoes.

What is La Niña?

La Niña is a phase of the El Niño-Southern Oscillation, a pattern of ocean and atmospheric circulations over the Pacific Ocean.

While El Niño is generally associated with hot and dry conditions, La Niña is the opposite. La Niña brings slightly cooler but wetter conditions to many parts of Australia. During this phase, northern and eastern Australia are particularly likely to have a wetter spring and summer.

Why is wet weather important for mosquitoes?

Mosquitoes lay their eggs on or around stagnant or still water. This could be water in ponds, backyard plant containers, clogged gutters, floodplains or wetlands. Mosquito larvae (or “wrigglers”) hatch and spend the next week or so in the water before emerging as adults and buzzing off to look for blood.

If the water dries up, they die. But the more rain we get, the more opportunities for mosquitoes to multiply. 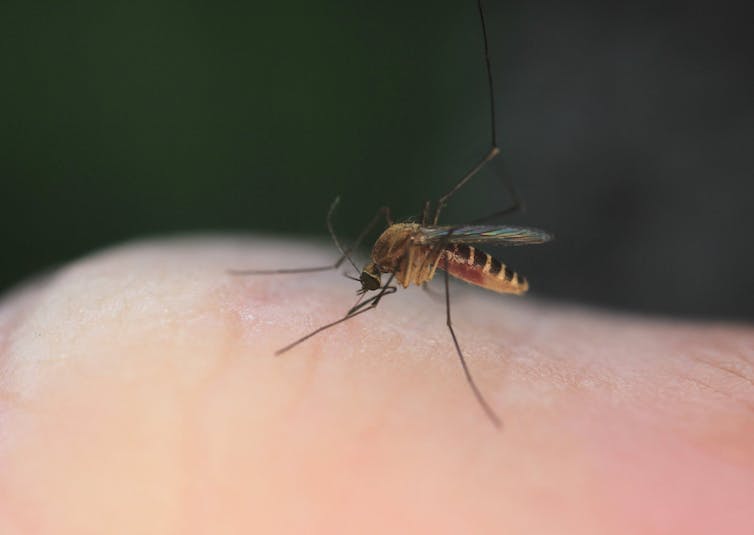 Mosquitoes are more than just a nuisance. When they bite, they can transmit viruses or bacteria into our blood to make us sick.

While Australia is free of major outbreaks of internationally significant diseases such as dengue or malaria, every year mosquitoes still cause debilitating diseases.

What happens when we get more rain?

We’ve know for a long time floods provide plenty of water to boost the abundance of mosquitoes. With more mosquitoes about, there is a higher risk of mosquito-borne disease.

The amount of rainfall each summer is also a key predictor for seasonal outbreaks of mosquito-borne disease, especially Ross River virus.

Read more: Explainer: what is Ross River virus and how is it treated?

Inland regions of Queensland, New South Wales and Victoria, especially within the Murray Darling Basin, are particularly prone to “boom and bust” cycles of mosquitoes and mosquito-borne disease.

In these regions, the El Niño-Southern Oscillation is thought to play an important role in driving the risks of mosquito-borne disease.

The hot and dry conditions of El Niño aren’t typically ideal for mosquitoes.

But historically, major outbreaks of mosquito-borne disease have been associated with extensive inland flooding. This flooding is typically associated with prevailing La Niña conditions.

For instance, outbreaks of Murray Valley encephalitis in the 1950s and 1970s had significant impacts on human health and occurred at a time of moderate-to-strong La Niña events.

Over the past decade, when La Niña has brought above average rainfall and flooding, there have also been outbreaks of mosquito-borne disease.

We can’t say for certain there will be more disease

History and our understanding of mosquito biology means that with the prospect of more rain, we should expect more mosquitoes. But even when there are floods, predicting outbreaks of mosquito-borne disease isn’t always simple.

This is because of the role wildlife plays in the transmission cycles of Ross River virus and Murray Valley encephalitis virus.

Read more: After the floods come the mosquitoes – but the disease risk is more difficult to predict

In these cases, mosquitoes don’t hatch out of the floodwaters carrying viruses, ready to bite humans. These mosquitoes first have to bite wildlife, which is where they pick up the virus. Then, they bite humans.

So how local animals, such as kangaroos, wallabies and water birds, respond to rainfall and flooding will play a role in determining the risk of mosquito-borne disease. In some cases, flooding of inland wetlands can see an explosion in local water bird populations.

How can we reduce the risks?

There isn’t much we can do to change the weather but we can take steps to reduce the impacts of mosquitoes.

Wearing insect repellent when outdoors will help reduce your chance of mosquito bites. But it’s also important to tip out, cover up, or throw away any water-holding containers in our backyard, at least once a week.

Read more: The worst year for mosquitoes ever? Here's how we find out