Have you used Google lately and been greeted by a yellow warning saying that the way Australians search on Google is under threat?

To understand why these messages are appearing, Media Files interviewed former chair of the Australian Competition and Consumer Commission (ACCC), Professor Allan Fels, and CEO of the Public Interest Journalism Initiative (PIJI), Anna Draffin (full recording above, recorded from home due to the pandemic).

This episode of Media Files is about world-first laws to be introduced later this year that will force Google and Facebook to pay for news on their sites to help fund public interest journalism.

The yellow warning messages by Google (which also appear on its sister site, YouTube) aim to garner public support for a campaign to pressure the federal government to dump revenue-sharing laws planned for later this year.

In a similar vein, Facebook’s Australian and New Zealand director of public policy, Mia Garlick, argued in the Sydney Morning Herald before the draft laws were released, that Facebook already provided top value to media outlets with

billions of opportunities for publishers to monetise their stories, gain new paying subscribers, serve ads, and keep Australians on their websites.

“I think people will ask Google and Facebook to ‘suck it and see’ to see what turns out instead of just going home with a cricket bat or baseball bat,” said Fels.

“It’s normal, it’s par for the course, in ACCC matters, that parties make threats […] with jobs, investment, higher prices, leave the country. Everything!”.

Fels believes the Morrison government may well respond with a new digital tax if Google or Facebook pulls some business out of Australia, like it did in Spain in 2014. Then, the Spanish government charged Google copyright fees for using news snippets, so Google shut down its news service.

“Personally, I think that the government has got this huge stick in the closet if Google walks or partly walks, and that is to put on a digital tax,” Fels said, adding that

A digital tax is being talked about globally, mainly at the OECD. And virtually every member of the OECD wants to put a digital tax on the platforms except the US. Certainly the US under Donald Trump […] But even if the US continue to oppose it, I think a lot of countries are just going to proceed with their own digital tax.

Anna Draffin and the big media companies agree with the ACCC’s findings that media companies cannot fairly compete with the digital platforms to win advertising revenue, and that this revenue shortfall has led to masthead closures and journalism job cuts.

Draffin said its introduction is urgent as COVID-19 has accelerated the demise of many news outlets, particularly in regional Australia.

At first, the ACCC was to oversee a voluntary code with the technology companies negotiating in good faith with the big news outlets.

But, unhappy with the progress of the bargaining talks, Treasurer Josh Frydenberg announced in April the code would be mandatory. The government released draft laws in July sparking Google’s fear campaign warning its users that Australians “search experience will be hurt by new regulation”.

In an August 24 blog post, Google argues it helps “more than 20 million Australians” and is unlikely to shut down Australian news from its search engines. 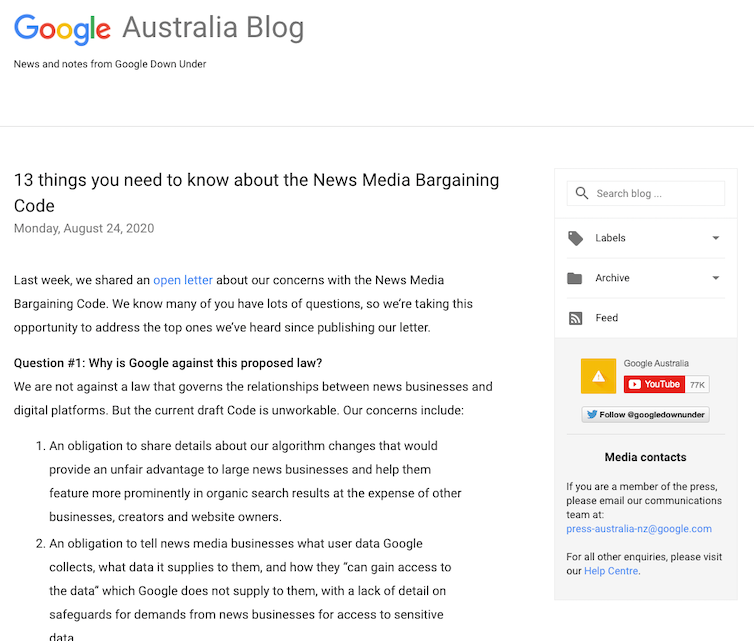 Google Australia’s blog post said the firm helps ‘more than 20 million Australians and over one million businesses in Australia.’ Google

Facebook contends news is just a fraction of the information on its platform and the mandatory code is unnecessary.

ACCC chair Rod Sims, on the other hand, argues that

News content brings significant benefits to the digital platforms, far beyond the limited direct revenue generated from advertising shown against a news item […] News media businesses should be paid a fair amount in return for these benefits.“

The mandatory code includes transparency measures to force the digital platforms to share data and insights about how it uses algorithms to rank news content online.

Draffin said while the proposed laws are welcome, at this stage, they do not include the public broadcasters nor do they include smaller newsrooms with annual turnover under A$150,000.

"The code alone isn’t necessarily going to be the solution particularly for that [smaller] end of the market,” said Draffin.

“New market entrants would largely sit outside of any benefit from the code. So there could be room for a loan or venture capital fund for start-ups as a separate policy setting,” she said.

Read more: In a world first, Australia plans to force Facebook and Google to pay for news (but ABC and SBS miss out)

The draft laws force the companies to negotiate for up to three months or face a binding binary dispute resolution where independent arbiters determine the winning bid among the bargaining parties. Breaches of the news laws would attract fines of up to $10 million or 10% of a company’s annual domestic turnover.