The headlines are grim. Alexei Navalny, a key leader of the Russian opposition, is currently fighting for his life in a coma after allegedly being poisoned in Siberia.

A medical team from Germany is en route to the hospital today to transport Navalny to Berlin for treatment.

Navalny, who has been the victim of numerous attacks over the years, was reportedly asked by a group of supporters in the city of Tomsk a day before he became ill why he wasn’t dead yet. According to one supporter,

He replied that it wouldn’t be beneficial for Putin. That it would lead to him being turned into a hero.

Who is Alexei Navalny?

Navalny is a key leader of the Russian opposition. Just 44 years old, he is a Moscovite lawyer who originally made his name as an anti-corruption blogger.

He then transformed his social media activism into a crowd-funded, anti-corruption organisation — the Anti-Corruption Foundation — that frequently releases slickly produced YouTube videos and reports detailing the high-level corruption in the Russian government.

He openly opposes President Vladimir Putin, famously calling the ruling United Russia party the “party of crooks and thieves”. He also ran for mayor of Moscow in 2013, and attempted to challenge Putin for the presidency in 2018, but was ruled ineligible due to a corruption conviction that was widely seen as politically motivated.

To support his political movement, Navalny has built a large network of offices around Russia and currently leads the (still unregistered) political party “Russia of the Future.”

He is not without controversy. His political views have been criticised by some in Moscow’s famously fractious opposition community, particularly his support of the annexation of Crimea and his ties to Russian nationalists.

But there is little question his views and activism have earned him the attention of the authorities. He has been jailed on administrative charges numerous times and his brother was sent to prison for three years. He also has endured frequent police searches and had green dye thrown on his face, damaging his vision.

In recent months, there has been an escalation in the authorities’ attacks against him. In July, he was forced to announce he would shut down his Anti-Corruption Foundation due to hefty fines. 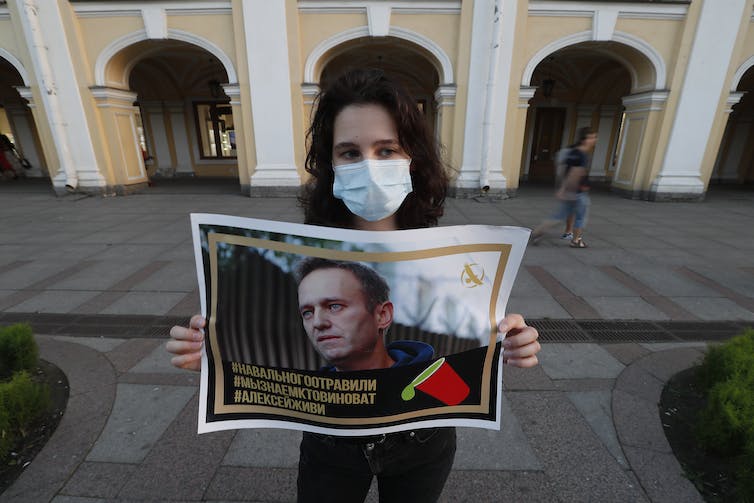 A woman holding a sign saying ‘Navalny was poisoned’ at a protest in St. Petersburg. ANATOLY MALTSEV/EPA

Amid all this activism, however, Navalny’s social media accounts are remarkably light-hearted and normal, often featuring pictures of him spending time with his family or jogging in his local Moscow park.

There is little question, therefore, that he is a key representative of a new generation of Russians who are not afraid to criticise the state and, after almost a century of nightmarish upheavals, want to finally live in a “normal country.”

A key part of this normality is reorienting Russia away from its backward-looking, post-imperial, Cold War posturing to become a forward-looking country focused on building better schools, infrastructure and health care.

The alleged Navalny poisoning takes place at a sensitive time for Putin and the Kremlin. Since the 2018 election, Putin’s popularity has been on the decline, hitting an all-time low of 59% in May, according to an independent polling agency.

The coronavirus pandemic has accelerated this drop as the virus has exposed the poor health care infrastructure across the country. This “Putin fatigue” has been most recently on show in the Russian Far East, where the Kremlin’s decision to jail the elected governor triggered massive protests just last month. 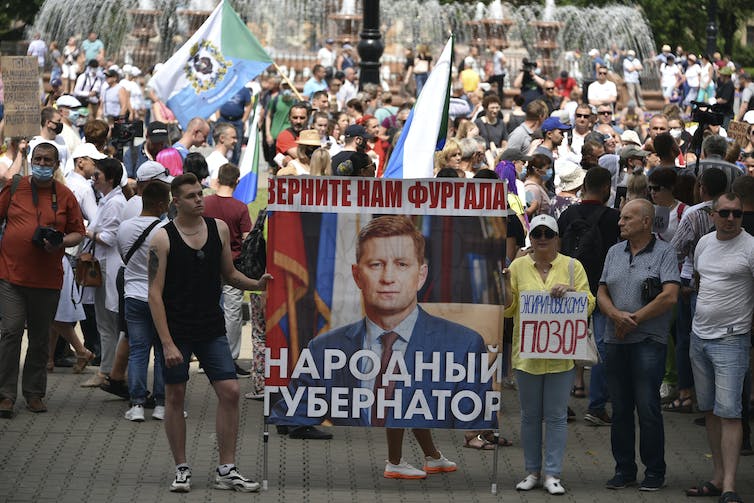 Thousands have protested against Putin in the Russian Far East city of Khabarovsk in recent weeks. Igor Volkov/AP

The Kremlin has responded to this flagging popularity with a large, stage-managed constitutional amendment process that seeks to renew support for Putin and the regime.

There has also been a growing crackdown against critics of the government, including a purge of leading constitutional law professors at one of Moscow’s most prestigious universities.

To add to this, a massive protest movement has broken out in neighbouring Belarus — one of Russia’s most stalwart allies — over claims President Alexander Lukashenko rigged the recent election. More than 200,000 people marched last week demanding Lukashenko’s resignation.

This protest movement has galvanised many young Russians, who want similar changes in Russia. It has also likely sparked fear within the Kremlin, where the country’s leaders view mass protest as an existential threat to their control of the Russian political system. 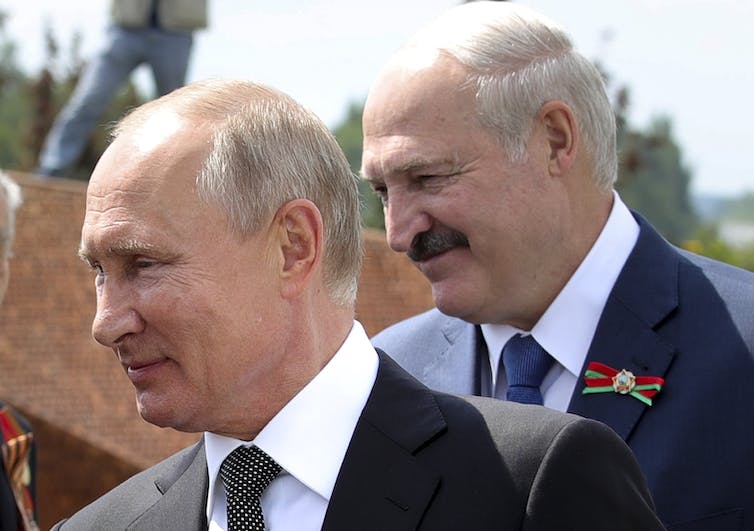 Lukashenko has made urgent calls to Putin to intervene in Belarus’ protests and help keep him in power. Mikhail Klimentyev

Who could have poisoned Navalny?

Given this context, it is not clear who is responsible for the alleged poisoning of Navalny.

If it does turn out to be a poisoning, it certainly fits a larger pattern of suspicious “illnesses” suffered by individuals seen to be a threat to the Russian state.

The best-known examples include the likely use of Novichok nerve agent by Russian security services to poison Sergei Skripal and his daughter Yulia in Salisbury, UK, in 2018.

And there are less well-known examples of suspected domestic poisonings. That same year, a key member of the opposition art group Pussy Riot — Pyotr Verzilov — was also apparently poisoned.

Although making Navalny a martyr certainly does not seem to help the Kremlin at this point, it is also possible the attack involved rogue elements of the Russian security state who were threatened by Navalny’s anti-corruption exposes. As one commentator in the UK put it:

If it does turn out to be a poisoning, we are unlikely to ever get definitive answers of who ordered the attack. But it does send a chilling message to those who criticise the current regime. And it is a sad reminder to the next generation of Russians that they do not (yet) live in a “normal country.”