Indonesia is still struggling to manage the COVID-19 pandemic. Its fatalities are the worst in Southeast Asia, but so far the most dire predictions have not come true.

And yet, the government appears even less focused on controlling the disease and more on reopening the country for business, including allowing tourists back to Bali. (There’s now talk of a travel bubble including Australia.) The government is clearly concerned the struggling economy could lead to more criticism of its handling of the crisis - and perhaps social unrest.

As of this week, Indonesia officially has more than 128,000 confirmed cases of coronavirus, with nearly 40,000 people undergoing treatment and more than 80,000 recovered. There are another 86,000 suspected cases.

But these figures understate the real impact of the pandemic. Indonesia does not count probable cases in its deaths, even though the World Health Organisation recommends it. One civil society group that monitors the pandemic says there may have been more been more than 15,000 coronavirus-related deaths.

And a model developed in Singapore predicts 200,000 cases by the end of September.

Testing has improved, but rates are still too low

In fact, no one really knows how bad the situation is. But it is certain to be much worse than the official figures, because testing rates are so low.

Testing capacity has improved considerably, with 269 laboratories now running COVID-19 tests,, up from only 12 labs in mid-March.

But with daily tests per thousand people still extraordinarily low (0.05 this week), this country of 270 million is yet to reach even a million tests. By contrast, Australia has run close to 5 million tests.

More concerning still, the positivity rate on tests run in Indonesia is a very high 12.9%. In Australia, it is 0.4%. 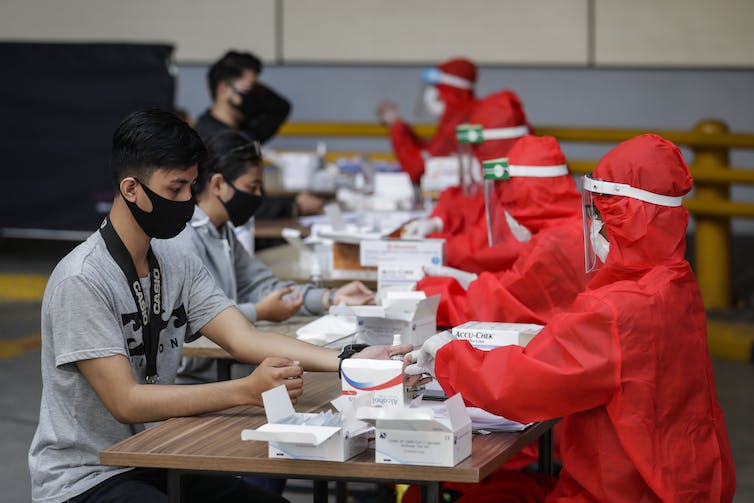 Blood samples are taken during a COVID-19 rapid test at a shopping mall. MAST IRHAM/EPA

So far, at least 73 doctors and 55 nurses have died from the virus, largely due to a lack of personal protective equipment and adequate support at the start of the outbreak.

Medical residents, who are underpaid and work in poor conditions without standard workers’ rights, have been hit hard, with large numbers reportedly infected.

Read more: Indonesian hospitals at risk of being overwhelmed: 6 strategies to beat COVID-19

In June, President Joko “Jokowi” Widodo finally called out the health ministry for lack of spending, saying it has a budget of A$7.1 billion, but had spent just 1.53% of that.

The controversial health minister, Terawan Agus Putranto, has now clearly been sidelined. After early bungles, his role was largely taken over by military figures appointed to the government’s COVID-19 taskforce.

Business is the top priority

Still, while things are bad, the horror scenario of a quarter of million dead — predicted by the University of Indonesia at the start of the outbreak — has not eventuated.

Only a little credit can go to the government for this. At best, it has muddled through, and some of its decisions seem plain crazy - for example, reopening Bali for tourism at a time when most of the world is trying to keep tourists out.

This happened domestically on July 31, with 4,000 Indonesians flying in after the Ministry of Tourism and Creative Economy paid Instagram influencers to visit. Bali now plans to open for foreign tourists in September. 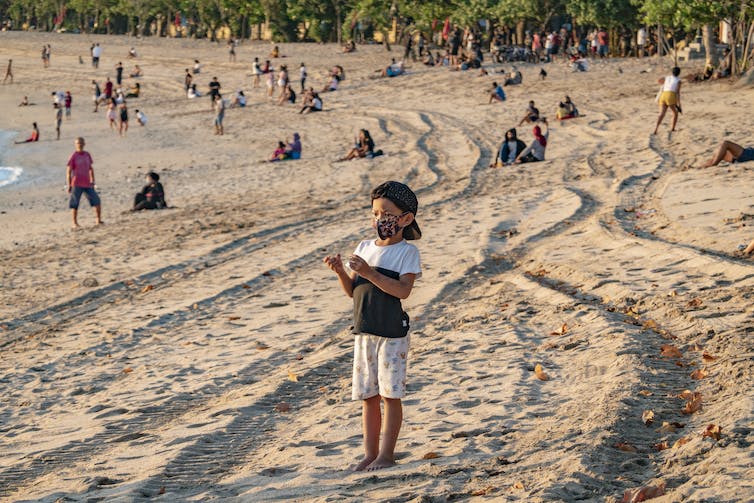 Tourists have slowly been returning to Bali’s beaches in the past couple months. MADE NAGI/EPA

Yes, Bali has relatively low infection rates and its tourism-dependent economy has basically collapsed, but surely avoiding the risk of a major outbreak should be the priority?

Visitors will be required to present a negative COVID-19 test result, but domestic tourists can get away with just a rapid antibody test. Given the unreliability of rapid tests, this is hardly sufficient protection against further spread.

The Bali decision reflects the clear pattern of the government’s approach to the pandemic — keep the economy ticking over by making business the top priority. This is understandable, to a point, because the economy was already in trouble even before the pandemic hit.

That might explain why Jokowi has been so anxious to keep people working, saying he doesn’t “know why people are getting worried lately”.

In fact, Jokowi seems to regard the pandemic as a golden opportunity for pro-business initiatives, with his government trying to push a massive omnibus bill through the legislature. This is mainly intended to make life much easier for big business, including the oligarchs who back him.

The bill would dump many workers’ rights, including severance payments and compensation for lay-offs. And the World Bank has pointed out the bill would also remove a range of important environmental protections.

Read more: Indonesia was in denial over coronavirus. Now it may be facing a looming disaster

Unfortunately, this pro-business approach hasn’t worked: the economy is now in dire straits. GDP growth slowed to 2.97% in the first quarter of 2020, and then contracted by 5.32% in the second quarter.

Jokowi believes the real problem is not his policies to contain the virus, but that the poor don’t follow government health guidelines.

Many disagree. In April, a group of small traders sued the government for mishandling the pandemic. Their claim was thrown out, but the sort of criticisms they made are now widespread on social media.

The government, probably concerned to avoid wider social unrest as the ranks of the jobless and poor grow, has come down hard on online critics, arresting dozens. Last week, it even threatened to sue one Twitter user just for saying a virus-sniffer dog would be more useful than the health minister. 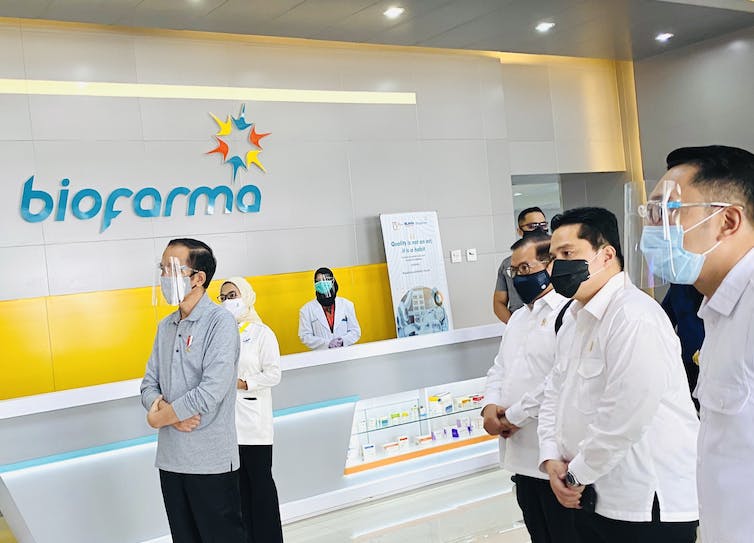 Joko Widodo has said he wants a vaccine to be available very soon, prompting fears the country is rushing the process. INDONESIAN PRESIDENTIAL PALACE HANDOUT/EPA

In the meantime, very little is being done about the wild proliferation online of COVID-19 hoaxes and conspiracy theories. Popular musicians, for example, have publicly backed bogus medical specialists and organised demonstrations to reject testing.

After authorities were attacked online for failing to do anything about hoaxes, the police finally pulled musician Erdian Aji Prihartanto (known as Anji) in for questioning this week over the herbal “cure” for coronavirus he discussed in a video with a so-called microbiology researcher.

But he is not the only one peddling dodgy cures — the government is part of the problem, too. The governor of Bali, for instance, advocated inhaling the steam of a local liquor known as arak, while the agriculture minister promoted eucalyptus amulets as a cure.

Will Jokowi’s alliances start to fray?

Despite the government’s perceptible nervousness, public dissatisfaction has not translated into serious political opposition.

Some Jokowi opponents recently declared a new group, the Action Coalition to Save Indonesia (Koalisi Aksi Menyelamatkan Indonesia, KAMI), but they are unlikely to achieve much against a government that has largely closed ranks.

Jokowi is lucky that after last year’s highly divisive elections, he was able to negotiate reconciliation among political elites to support his government before the pandemic hit.

Bringing leading opponents like rival presidential candidate Prabowo Subianto into cabinet and negotiating a political alliance that can dominate the legislature has put him in a good position. For now, at least, he looks set to sit this crisis out, regardless of his government’s sluggish and messy response to the pandemic.

Read more: With his new cabinet, Indonesia's president Jokowi prioritises national stability over everything else

But 3.7 million Indonesians have lost their jobs so far, and total unemployed is expected to hit 10 million by the end of the year.

The poverty rate is also expected to increase to 9.7% by end of the year, pushing 1.3 million more people into poverty. In a worst-case scenario, 19.7 million will become poor.

If infections escalate, deaths increase significantly and mass public protests emerge, the cohesion among political elites might start to unravel. No wonder the government is jumpy about criticism of the policies that make its response to the pandemic the worst in the region.