In February, major social media platforms attended a meeting hosted by the World Health Organisation to address coronavirus misinformation. The aim was to catalyse the fight against what the United Nations has called an “infodemic”.

Usually, misinformation is focused on specific regions and topics. But COVID-19 is different. For what seems like the first time, both misinformation and fact-checking behaviours are coordinated around a common set of narratives the world over.

In our research, we identified the key trends in both coronavirus misinformation and fact-checking efforts. Using Google’s Fact Check Explorer computing interface we tracked fact-check posts from January to July – with the first checks appearing as early as January 22. 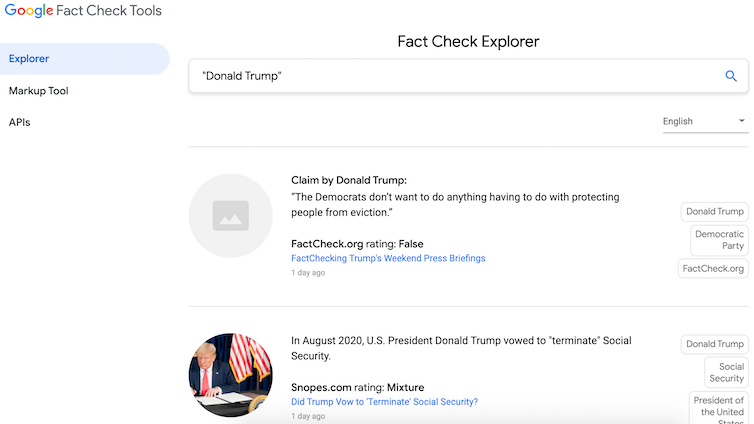 Google’s Fact Check Explorer database is connected with a range of fact-checkers, most of which are part of the Poynter Institute’s International Fact-Checking Network. Screenshot

A uniform rate of growth

Our research found the volume of fact-checks on coronavirus misinformation increased steadily in the early stages of the virus’s spread (January and February) and then increased sharply in March and April – when the virus started to spread globally.

Interestingly, we found the same pattern of gradual and then sudden increase even after dividing fact-checks into Spanish, Hindi, Indonesian and Portuguese.

Thus, misinformation and subsequent fact-checking efforts trended in a similar way right across the globe. This is a unique feature of COVID-19.

According to our analysis, there has been no equivalent global trend for other issues such as elections, terrorism, police activity or immigration.

It did this by collating news articles with reporting by a wide range of local fact-checking networks and global groups such as Agence France-Presse and NewsGuard.

We analysed this data set to explore the evolution of specific COVID-19 narratives, with “narrative” referring to the type of story a piece of misinformation pushes.

For instance, one misinformation narrative concerns the “origin of the virus”. This includes the false claim the virus jumped to humans as a result of someone eating bat soup.

We found the most common narrative worldwide was related to “emergency responses”. These stories reported false information about government or political responses to fighting the virus’s outbreak.

This may be because, unlike narratives surrounding the “nature of the virus”, it is easy to speculate on (and hard to prove) whether people in power have good or ill intent.

Notably, this was also the most common narrative in the US, with an early example being a false rumour the New York Police Department would immediately lock down New York City.

What’s more, a major motivation for spreading misinformation on social media is politics. The US is a polarised political environment, so this might help explain the trend towards political misinformation. 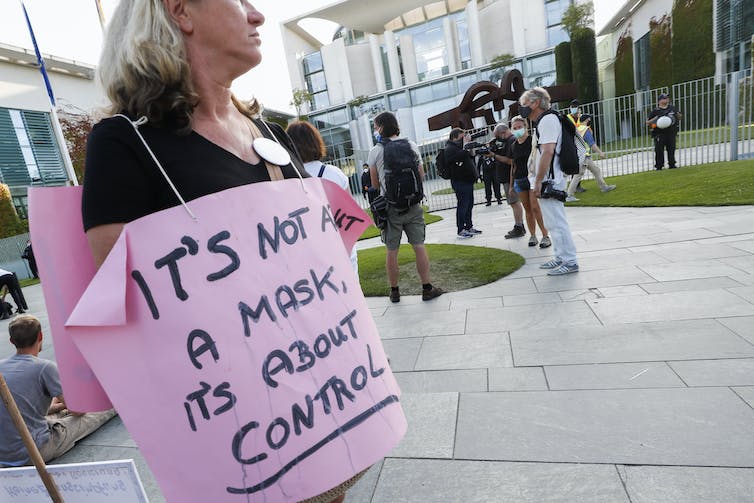 A protester rallies against coronavirus pandemic regulations in Berlin, on August 1. Felipe Trueba/EPA

We also found China has more misinformation narratives than any other country. This may be because China is the world’s most populous country.

However, it’s worth noting the main fact-checking website used by the Empirical Studies of Conflict Project for misinformation coming out of China is run by the Chinese Communist Party. 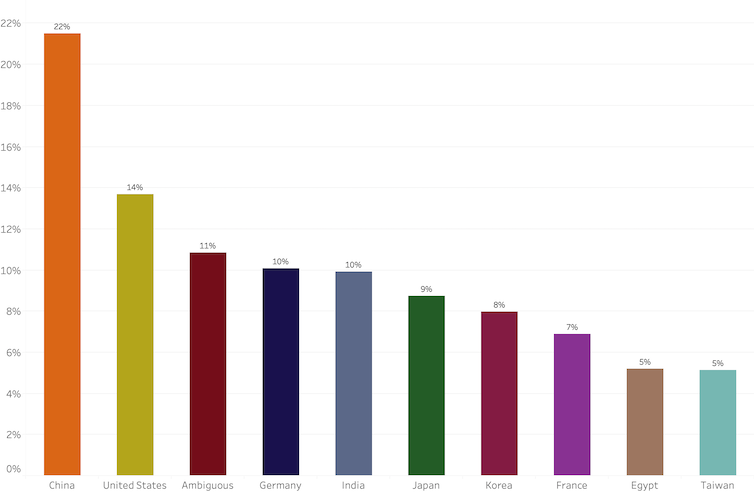 This chart shows the proportion of total misinformation narratives on COVID-19 by the top ten countries between January and July, 2020.

When fighting misinformation, it is important to have as wide a range of independent and transparent fact-checkers as possible. This reduces the potential for bias.

Hydroxychloroquine and other (non) ‘cures’

Another set of misinformation narratives was focused on “false cures” or “false preventative measures”. This was among the most common themes in both China and Australia.

One example was a video that went viral on social media suggesting hydroxychloroquine is an effective coronavirus treatment. This is despite experts stating it is not a proven COVID-19 treatment, and can actually have harmful side effects.

Myths about the “nature of the virus” were also common. These referred to specific characteristics of the virus – such as that it can’t spread on surfaces. We know this isn’t true.

Read more: We know how long coronavirus survives on surfaces. Here's what it means for handling money, food and more

Our analysis found different narratives peaked at different stages of the virus’s spread.

In contrast, theories relating to emergency responses surfaced later and remain even now, as governments continue to implement measures to fight COVID-19’s spread.

A wide variety of fact-checkers

We also identified greater diversity in websites fact-checking COVID-19 misinformation, compared to those investigating other topics.

Read more: 5 ways to help stop the 'infodemic,' the increasing misinformation about coronavirus

It seems resources previously devoted to a wide range of topics are now honing in on coronavirus misinformation. Nonetheless, it’s impossible to know the total volume of this content online.

For now, the best defence is for governments and online platforms to increase awareness about false claims and build on the robust fact-checking infrastructures at our disposal. 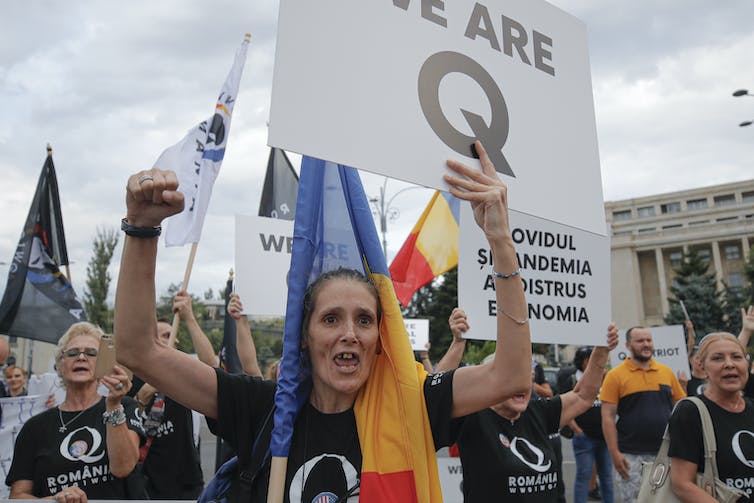 Romanian QAnon supporters protest against the government’s measures to contain COVID-19’s spread, on August 10. QAnon conspiracists claim the virus was spread deliberately, as part of a plot against US President Donald Trump led by Satan-worshipping elites. Vadim Ghirda/AP