It also sends a sharp signal to the remaining independent media in the territory: watch your step, or you could be next.

Lai, his two sons and four top executives of the Next Digital media group were all arrested under the new law. On the same day, police raided the offices of Next’s flagship publication, Apple Daily, deploying over 200 officers to search the premises for almost nine hours.

China imposed the national security law in June, bypassing the local legislature and breaching the principle of non-interference in the city’s governance.

The national security law is designed to make dissent all but impossible in Hong Kong, including in the city’s once-freewheeling but gradually diminished independent media. 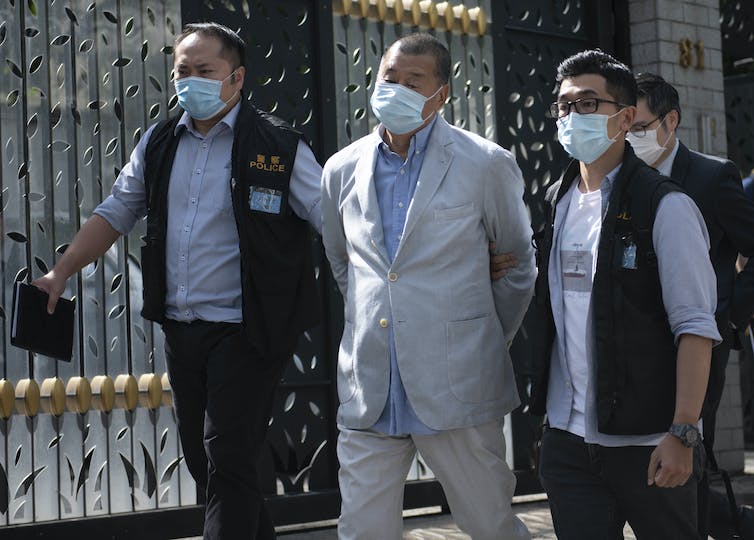 Jimmy Lai had been an outspoken critic of the government — and knew his arrest was likely. VERNON YUEN/EPA

What the new law means for journalists

Lai and the others were arrested under article 29 of the new law, which criminalises collusion with a foreign country or external elements to endanger national security.

Banned acts include collaborating with a foreign entity to impose sanctions on Hong Kong or China, seriously disrupting the making of laws or policies, or provoking hatred of the government among Hong Kong residents.

Although Hong Kong’s pro-democracy movement is a grassroots, homegrown affair, Beijing has sought to portray it as the result of foreign meddling. Hong Kong’s last two leaders, Carrie Lam and CY Leung, both alleged foreign forces were behind the protests that took place during their terms.

Read more: Hong Kong activists now face a choice: stay silent, or flee the city. The world must give them a path to safety

Beijing has already signalled that collusion will be broadly interpreted under the law.

Police have not disclosed the specifics of Lai’s offences, but his July meeting with US Vice President Mike Pence and Secretary of State Mike Pompeo is likely to be under the microscope, as is an opinion piece he wrote for The New York Times in May.

Lai’s status as an influential media owner and prominent pro-democracy activist has positioned him in Beijing’s crosshairs. He has been the target of extraordinary vitriol from mainland state media and was arrested by Hong Kong police in February and April on charges of participating in an illegal assembly.

Lai’s case is undoubtedly intended to serve as a warning — "killing the chicken to scare the monkey,“ to borrow a Chinese saying — and an inducement for the city’s journalists to self-censor, lest they fall foul of the new law.

For instance, an editorial calling for Hong Kong’s constitutionally guaranteed autonomy to be preserved could be interpreted by a zealous prosecutor as inciting secession under articles 20 and 21 of the law. 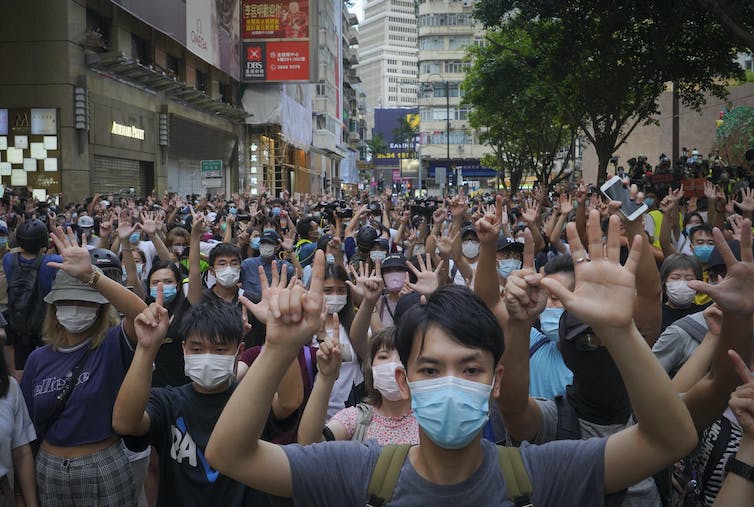 An uncertain future for independent media

Although self-censorship has long been a concern, Hong Kong has traditionally enjoyed a vibrant free press. In 2002, Reporters Without Borders ranked it 18th in its inaugural World Press Freedom Index.

However, by 2020, the city had plunged to 80th. (China, meanwhile, ranked 177th of 180 countries.) The application of the national security law in Hong Kong will no doubt see the territory’s ranking tumble even further.

Apple Daily’s days appear to be numbered. Similar fates could befall other outspoken independent media, like the crowd-funded Hong Kong Free Press, which launched in 2015 amid rising concerns over declining press freedoms in the city. This was around the same time the South China Morning Post, Hong Kong’s venerable English-language daily, was acquired by the mainland conglomerate Alibaba.

Read more: China is taking a risk by getting tough on Hong Kong. Now, the US must decide how to respond

The public broadcaster Radio Television Hong Kong has remained editorially independent, but it is under review again, having recently fallen foul of the local regulator for criticising the police handling of pro-democracy protests in a manner that was

irresponsible, and could be regarded as a hate speech with the effect of inciting hatred against the police.

In recent years, Financial Times editor Victor Mallet’s visa renewal was denied after he chaired a discussion with a pro-independence politician, and New York Times reporter Chris Buckley’s Hong Kong work permit was denied, without any specific reason, months after he was also kicked out of China.

The Times has moved some of its former China- and Hong Kong-based reporters to South Korea and Taiwan in response. However, foreign journalists who engage in critical reporting on China and Hong Kong could be in breach of the national security law regardless of where they are based, as the law applies extraterritorially and to non-Chinese citizens as well as nationals. 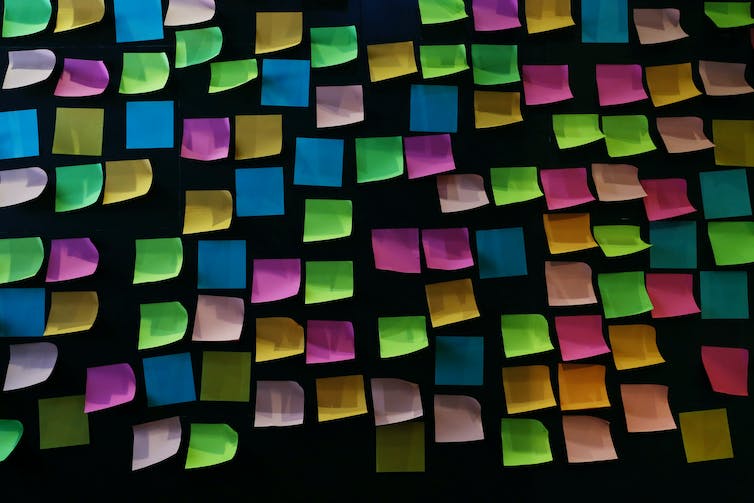 Blank Post-it sticky notes have been posted around Hong Kong to protest the breadth of the new national security law. TYRONE SIU/Reuters

Speaking for the party’s will

China’s constitution purports to preserve freedom of expression. It has never met the promise of its terms. In 2016, President Xi Jinping told the country’s press,

all news media run by the party must work to speak for the party’s will and its propositions and protect the party’s authority and unity.

The guarantees of free speech and a free press under Hong Kong’s Basic Law are now on the same trajectory.

It is unlikely the media in Hong Hong will be nationalised to the extent it is on the mainland. Instead, Beijing is deploying a combination of acquisition, co-optation and intimidation to obtain its compliant silence.