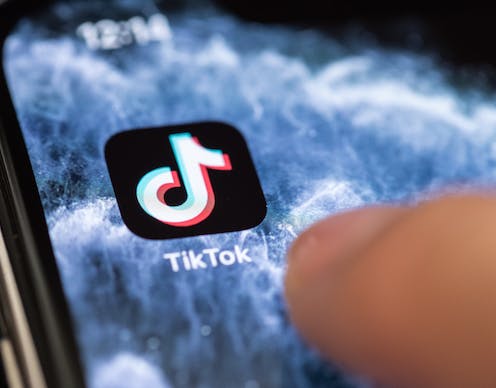 TikTok, the made-in-China, video-sharing platform beloved by youth and influencers alike, is suddenly everywhere in our new world of COVID-19 lockdowns and social distancing.

The platform’s growth has been tremendous, but this has come at a cost: it has come under increasing scrutiny from politicians in the US and allies like Australia over concerns about potential breaches of data security and the platform’s perceived ties to the Chinese government.

The Trump administration is now considering banning the platform – and Australia may well follow suit.

The controversies surrounding TikTok are centred around its Chinese origins, and its potential connections or compliance with the Chinese Communist Party and its authoritarian system.

Read more: China could be using TikTok to spy on Australians, but banning it isn’t a simple fix

There are some reasons to be concerned. The platform is known to censor material deemed sensitive by the Chinese government.

Last year, for example, TikTok was accused of manipulating videos relating to Hong Kong pro-democracy protests and was forced to apologise for censoring a video criticising China’s crackdown on Uyghurs. This prompted claims of it being an arm of China’s state-run media system.

Digital security experts also point to the potential for the data TikTok collects from users to be sent to China’s servers.

But there is not clear evidence yet that TikTok poses a threat to the national security of countries like the US or Australia, or that the CCP interferes in the overseas operations of the company.

TikTok is owned by the Beijing-based technology company Bytedance, which also operates a Chinese version of the platform called Douyin.

As the pressure has mounted against the platform in the West, however, TikTok has shifted into survival mode through de-Sinicization. While users are posting videos on TikTok from the safety of their bedrooms, the company is deliberately distancing itself from Beijing.

Part of this distancing strategy involves announcing plans to move its operational headquarters outside China. According to industry reports in China this involved disbanding the Beijing-based overseas operation team, as well as cutting off the Chinese team’s access to its international data pool.

Read more: TikTok is popular, but Chinese apps still have a lot to learn about global markets

The company also announced plans this week to add 10,000 jobs in the US, following a commitment to open a transparency centre in Los Angeles earlier this year.

TikTok’s most prominent PR move has been hiring key international players in communications, entertainment, government relations, IP protection, cybersecurity and global business solutions to change the way the company is structured and run in its overseas markets.

Of course, bringing foreigners into the corporate tent is not a new strategy for a Chinese tech firm. Alibaba and Huawei have done this with mixed success; Huawei, in particular, has failed to convince Western governments it would not pose a security risk to their 5G networks.

But TikTok is a different kind of proposition. Unlike other Chinese tech companies and platforms (such as WeChat), TikTok does not operate in China. The platform was created to be global.

The response to TikTok’s rise in the US comes from the Donald Trump manual of political strategy. When the trade war between the US and China broke in January 2018, the two nations engaged in a tit-for-tat series of tariffs, from steel and automobiles to pork and soybeans.

In the latest round of recriminations and political bluster, Trump suggested he was considering using TikTok as a way to retaliate against China for its handling of the coronavirus. The idea is to erect a barrier against TikTok and ask like-minded allies to do the same.

Read more: The internet is now an arena for conflict, and we're all caught up in it

What this reaction precipitates, however, is a move toward national internet sovereignty. Some are calling this the age of the “splinternet”, rather than the internet as we know it, a borderless space.

For starters, erecting barriers against platforms offers limited effectiveness because users will find a way around them.

But banning TikTok, or any other Chinese platform, is also taking a page directly from Chinese President Xi Jinping’s “little red book” for the digital age.

The list of Western platforms and news sites now blocked in China is very long. Playing China’s game of shuttering foreign sites will only provide more ammunition for Chinese propaganda against the West – and lead to more tit-for-tat closures.

Blacklisting companies or individuals based on country of origin and citing national security concerns sets a dangerous precedent. It’s akin to going down the path of digital McCarthyism; not only will this erode online freedom, it won’t address the more significant problems of data harvesting and news manipulation — practices that are not unique to Chinese platforms.

Some critics have instead argued for more coordinated global governance of tech companies. As Samm Sacks writes in Foreign Affairs,

we need stricter rules for data security and privacy for all companies, not just Chinese ones … regardless of country of origin, [to] manage online content in an era of misinformation.

As with all user-driven platforms, content moderation on TikTok runs up against issues of freedom of speech. Censorship will continue be a concern for the platform, and TikTok’s content moderators will inevitably be tested by those who want to use it to challenge China.

In the interest of maintaining its brand credibility as a truly global company, TikTok’s smartest move would be to continue to distance itself from Beijing — and for Beijing to do the same.