This month, the Victorian government announced on-the-spot fines for trespassers on farms following an upper house inquiry into how animal activism affects agriculture.

It’s the latest in a string of new state and federal laws designed to crack down on activists who trespass on farms – often to gather video evidence of alleged animal cruelty, which is later distributed to the public.

But amid the flurry of attention on activists, another group of trespassers on farms has largely escaped attention: illegal hunters.

Unauthorised access to farm properties can create many problems – not least, it runs the risk spreading disease such as African swine fever that can devastate farming industries.

It’s important that laws to tackle farm trespass are evidence-based. So let’s look at the evidence. 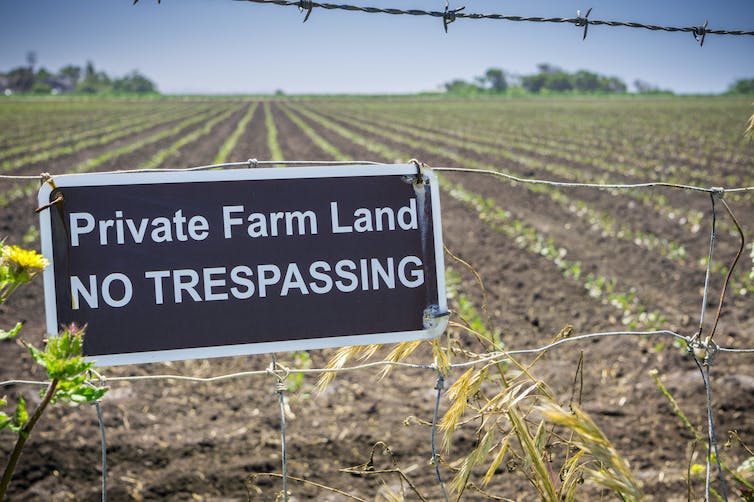 Media coverage of activists trespassing on farms has appeared regularly in recent years.

Over several months in 2018-19, activists targeted the Gippy Goat farm and cafe in Victoria – in one incident stealing three goats and a lamb. News reports covered the protests, claims by farmers that the fines issued to the activists was inadequate, and the eventual closure of the farm to the public.

In another example last year, the front page of rural newspaper the Weekly Times featured a family exiting the farming industry after alleged trespass and threats from animal activists.

Read more: Not just activists, 9 out of 10 people are concerned about animal welfare in Australian farming

Activists did not escape the attention of politicians. Ahead of Victoria’s new legislation this month, federal parliament last year passed a bill criminalising the “incitement” of both trespass, and damage or theft of property, on agricultural land.

Speaking in support of the bill, Attorney-General Christian Porter said trespass onto agricultural land could contaminate food and breach biosecurity protocols. He specifically cited “activists” when describing how the laws would work.

The New South Wales government last year also introduced significant fines for trespass on farms in the Right to Farm Act. And in South Australia, the government wants those who trespass or disrupt farming activities to face tougher penalties.

But as lawmakers crack down on animal activists, the problem of trespass by illegal hunters gets little political attention. 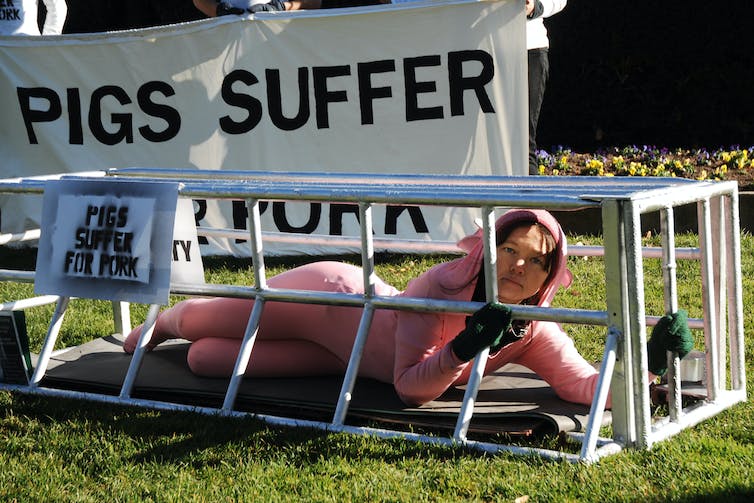 Animal rights protesters have been the subject of intense media attention, but illegal hunters fly under the radar. David Beniuk/AAP

In 2015 and 2016, this article’s co-author Alistair Harkness surveyed 56 Victoria farmers about their experiences and perceptions of farm crime. Farmers reported that in recent years, illegal hunters had caused them economic loss and emotional anguish by:

A follow-up mail survey of 906 Victorian farmers in 2017 and 2018 asked them to rate the seriousness of a range of issues. Farmers reported the following issues as either serious or very serious: illegal shooting on farms (34.4%), animal activism (30.9%), and trespass (44.2%).

Lead author Kyle Mulrooney is conducting the NSW Farm Crime Survey 2020. The work is ongoing, but so far farmers have reported feeling victimised by trespassers generally, and fear about illegal hunters. Farmers were not specifically asked for their views on trespassing activists.

A submission to a NSW parliamentary inquiry last year underscored the distress felt by farmers when hunters trespass on their properties. Farmer John Payne recalled:

Recently we had a period over several nights, where unknown persons trespassed on our property and callously killed a substantial number of our goat kids, in one case trussing one up before killing them. All just for fun and sport! […] This is one of several events where people have trespassed and shot our animals for fun, or hunted for pigs or wildlife, with little fear of detection, arrest and prosecution.

Giving evidence to the NSW parliamentary inquiry, Detective Inspector Cameron Whiteside, the State Rural Crime Coordinator, said illegal hunting was “the most cited factor associated with the trespass” on farms.

Police action appears to be following the evidence. In communication with the lead author, Whiteside has said enforcement and operations focused on illegal hunting and trespass are a primary and current focus of the Rural Crime Prevention Team.

As African swine fever sweeps Asia, Australian pork producers have been urged to ramp up biosecurity efforts on their own properties. This reportedly includes restricting visitor numbers and separating visitor and farm vehicles.

There are fears that if the disease hits Australia, it could could shut down Australia’s A$5.3 billion pork industry, leading to mass job losses.

Given these risks, it’s important that policies to crack down on farm trespassers are guided by evidence, and don’t unduly target a single group.

And importantly, more research into the issue is needed – including into the social and economic impacts of farm trespass, in all its forms.

Read more: It isn't clear how the new bill against animal rights activists will protect farmers