He prevailed over a field of 24 Democrats from across the political spectrum and has emerged as his party’s nominee for president in a manner unthinkable in January: a united party, from left to right, across race and creed, age and ideology. He is the victor despite mediocre fundraising, no digital media traction, no base of wild enthusiasts. Voters had to consider his appeals before coming to understand and then accept that it was indeed Joe Biden, who failed in his bids for the White House in 1988 and 2008, who was the strongest Democrat to go up against Donald Trump and take him out.

Biden’s essence is unchanged from that first race more than three decades ago. As Richard Ben Cramer reported in his legendary account of the 1988 campaign, What It Takes, Biden realised:

What Americans wanted from their government [was] just a helping hand, to make the fight for a better life for their kids, just a platform to stand on, so they could reach higher … That was his life: he was just a middle-class kid who’d got a little help along the way … and that was all he had to show. But that’s what connected him to the great body of voters in the country. That’s all he needed!

Fast-forward to Biden as vice president in the Obama administration. I captured his addresses to the Democrats in the House of Representatives. This is how I recorded two journal entries for my book (with co-author Bryan Marshall) The Committee, on Obama’s historic legislative agenda in Congress.

We have to help the middle class and working Americans – the people who sent us here.

We will win based purely on the merits of our position. America is going to get an absolutely clear comparison this year. It’s a stark, stark, stark, contrast […] Osama bin Laden is dead and General Motors is alive.

This has been Biden’s whole life – connecting with the gut of middle America. His 2020 message is the same as he ran on in 1988. And the task is the same as when he was on the ticket with Obama in 2008: to ensure America recovers from the worst economic crisis since the Great Depression.

Biden was responsible for ensuring the delivery of the American Recovery Act – the first piece of major legislation enacted after Obama and Biden took office. Ultimately, it spurred a decade of economic growth and full employment. So Biden has been there and will work to do it again. 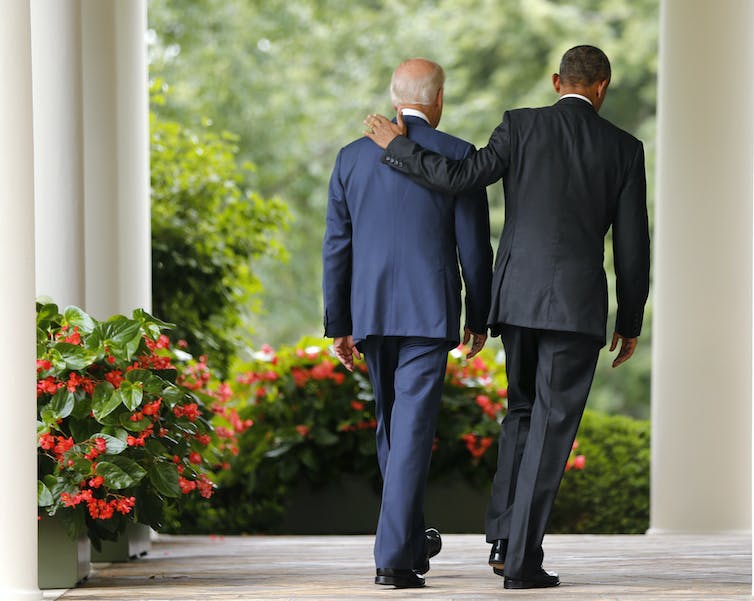 A vice president to pick

We know only that it will be a woman. The oped pages and social media are on overdrive on who is best. Two things are paramount to Biden, because he knows the job and he knows what has to work.

Especially given his age, it is imperative the vice president be fully qualified and capable to step in to serve as president on her first heartbeat after his last – and is seen as such by the American people. This is where Sarah Palin was such a failure for John McCain in 2008.

Other mediocrities, both callow (Dan Quayle under George H.W. Bush) and criminal (Spiro Agnew with Richard Nixon) served but did not ascend to the presidency. Others, starting with Walter Mondale under Jimmy Carter, and then Al Gore under Bill Clinton, and Dick Cheney under George W. Bush, became true partners in governance, with real power and responsibility, and remade the office. That is the Biden template.

Biden insisted on – and received from Obama – a promise that he would be the last person in the room with the president before major decisions were taken, so he could give the full benefit of his judgment – whether the president took it or not. (Obama did not take Biden’s advice on the raid that killed Osama bin Laden.)

Biden wants a vice president who can do the same with him. The virtues she would bring to the ticket, such as Amy Klobuchar’s ability to drive votes for Biden in the Midwest, and Kamala Harris, who can bring a surge of African American voters to the polls, are but the icing on the judgment Biden will make.

The second factor is chemistry: Biden has to feel with his selection the same intensity that marked Obama’s bond with him over their eight years together. So a woman who is absolutely qualified and star-studded won’t get it if Biden feels they cannot do great things together through shared conviction and trust.

Given the strike rate of vice presidents who have become president – five of the past 11 since 1952 – Biden’s choice will likely affect the future of the Democratic Party and the country for perhaps the next 12 years.

An election to win

Ask anyone in America who is politically attuned and they will tell you this is the most important election of their lifetimes. President Donald Trump has the bully pulpit of the White House where, as we have seen during the pandemic crisis, he can command the airwaves for hours every day to pound home his message. He has a TV network that has effectively become a state media channel. He has a Republican senate that will provide no check on his misbehaviour and no effort to protect the election against Russian interference or voter suppression.

Trump has 90% loyalty in the Republican Party. He has the power to declare national emergencies and launch military action to defend the United States. His campaign has a viciously effective social media war machine. He will conservatively outspend Biden by well over US$100 million. His base has not cracked – it is solid at 46% – after the pummelling Trump triggers from what he calls “fake news” and “the enemy of the people”, and after the disgrace of impeachment.

Trump’s avalanche of lies will continue unabated. He is the most shameless and relentless campaigner in modern American history. And if gets enough votes in the key states he won in 2016, he can be re-elected.

Biden’s task is clear: to take back those traditionally Democratic states – Pennsylvania, Michigan, Wisconsin – that Trump won in 2016’s outburst of populist anger at the political establishment, which included Hillary Clinton. And he must withstand and neuter the unprecedented charges of conspiracy and corruption that Trump is unleashing with “Obamagate”.

As of now, Biden leads Trump nationally by three to nine points in the polls. He is leading in three key battleground states, including Florida, and has a chance to capture Arizona and North Carolina. Trump is targeting Minnesota, New Hampshire and New Mexico. The consensus today is if the election was held now, Biden would win.

November is increasingly becoming a referendum on Trump and his management of the pandemic, and whether voters, facing disastrous hardship (over 16 million Americans lost their health insurance when they lost their jobs), trust Trump to restore the economy.

Biden’s message is already clear: Trump’s failures to appreciate the pandemic and act to protect the American people unnecessarily cost tens of thousands of lives. Biden helped bring the nation back from the Great Recession in 2009 – and knows how to do it again in 2021.

A country to heal

Biden’s campaign launch video in April 2019 could not have been clearer:

I wrote at the time [of Nazis marching in Charlottesville in 2017] that we’re in the battle for the soul of this nation. Well, that’s even more true today. I believe history will look back on four years of this president and all he embraces as an aberrant moment in time. But if we give Donald Trump eight years in the White House, he will forever and fundamentally alter the character of this nation — who we are — and I cannot stand by and watch that happen […] The core values of this nation, our standing in the world, our very democracy, everything that has made America America, is at stake. … Even more important, we have to remember who we are. This is America.

In the late stages of the primaries, the overwhelming sentiment of most Democrats was simple: get rid of Trump. As voters could see limits to the appeal of Bernie Sanders and Elizabeth Warren, as Kamala Harris and Amy Klobuchar and Pete Buttigieg simply could not reach critical mass, they decisively concluded it was Biden that everyone knew and trusted to do the job and free the country of Trump.

Because first they want America healed, too.