Coronavirus & Me is the kind of hybrid user-generated television production we can expect to see more of in coming months.

With the majority of Australia’s film and television industry shut down, and essential production shifting to bedrooms, YouTube style content is elbowing in to the free-to-air and subscription-video-on-demand (SVOD) experience.

Tinkering with whatever is at hand to produce media content reflects the emergence of “bricolage” culture into the mainstream.

Curating experiences is all the rage, from takeaway fine dining with Spotify playlists to delivered cheese platters and handpicked reading. But curation suggests a purposeful selection from premium products. Bricolage, on the other hand, makes the most out what’s within reach.

The French verb bricoler and noun bricoleur roughly translate as DIY tinkering and a professional handyman respectively. In fine art circles, bricolage refers to art made out a diverse range of non-traditional materials. Unlike collage or montage, the combined elements are unexpected and wouldn’t normally sit together.

The artistry of bricolage is how individual elements maintain their cultural and material provenance but the final arrangement invites new meanings and connections from the viewer.

New streaming platform, iWonder, was quick to respond to COVID-19, calling in March for short user-generated documentaries about Australians’ experiences. The initial 14-minute Coronavirus & Me compilation featuring five short stories was picked up by 7plus and aired at the end of April.

The appeal of user-generated content (UGC) to broadcasters is in the heightened authenticity of unmediated video diaries, remote production, and low costs. Amateur content on television isn’t new – see the 25-year legacy of Australia’s Funniest Home Videos – but it’s usually fronted by a charismatic host with theatrical music to smooth over imperfections.

Coronavirus & Me offers heartfelt video diaries from diverse and enjoyable personalities. There’s a little touching up, such as stock music and imagery, but no host.

Sydney-based director producers, Alex and Catherine Weinress of Hixon Films, have arranged the submissions into a meaningful journey: fleeing home to Sydney from Wuhan; a mortuary worker’s fears; a performing artist’s coping strategies; an Instagram-inspired parody of Tom Hanks’ Castaway; and a refined short film called Oma that documents a family’s trials in isolation with a grandma with Alzheimer’s disease.

A mixed bag of professional and amateur stories, Coronavirus & Me would usually inhabit far corners of the online universe. As a compilation, it contributes to a common understanding of shared adversity and community.

ABC’s At Home Alone Together, an eight-part parody series hosted by Ray Martin, is another example of bricolage production. Supported by Screen Australia, the series provides opportunities for emerging writers and performers during lockdown.

Again, the mixed offering might not normally reach production, but its appeal is in the incongruous situation we all share. It’s hard to know what to expect from one segment to the next – an unusual quality to see in broadcast genres.

Making the most of whatever’s at hand during lockdown is producing some gems. Maria Albiñana and Luke Eve from More Sauce have launched a 10-part web series aptly titled Cancelled, which follows the actor and producer couple cancelling their wedding in Spain as they face lockdown away from home. The docu-drama strikes an elegant balance between the rawness of a smart phone diary and the artful storytelling of professional production. 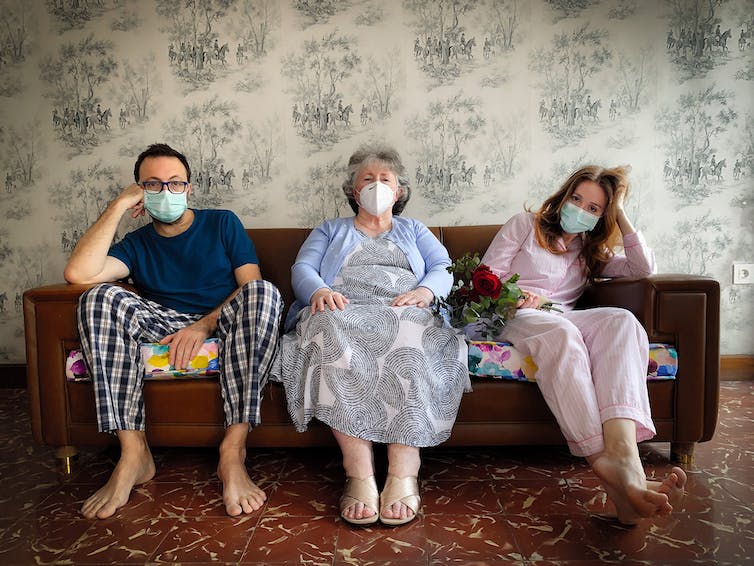 Web series Cancelled is about a couple whose wedding cancellation puts them in lockdown away from home. Over 26,000 viewers tuned in within a week of its Facebook launch. More Sauce/Facebook

Orange Is The New Black creator Jenji Kohan is working on quarantine series Social Distance for Netflix. Writing and production will be done virtually and the cast will act and film themselves at home.

Understanding human experience is an important aspect of these emerging shows, streams and ways of watching. The process of reflecting and sorting experiences is inherent to the traditional written diary, addressing oneself in the future.

In Italy, director Olmo Parenti reversed this idea to capture the reported lag of other countries. He asked Italians in lockdown to record a message to their past self of 10 days prior.

Meanwhile, the State Library of NSW has partnered with ABC Radio Sydney to collate written reflections in The Diary Files. The intention is to create a time capsule for future interpretation.

A decade ago, the promise of YouTube and other online media was to foster a more participatory culture. The pandemic and new examples of isolation content reveal the essential role of editors and producers as bricoleur – vital to piecing together our stories.