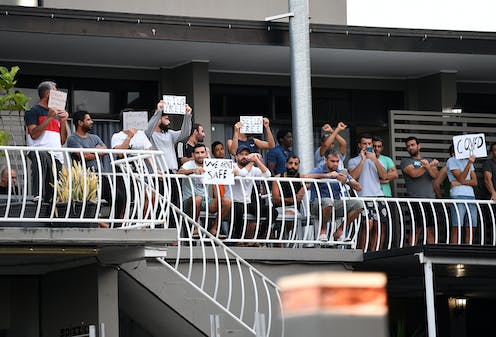 Pressure is growing to release people from immigration detention, with lawyers from Australia’s Human Rights Law Centre mounting a court case on behalf of a refugee seeking protection from COVID-19. They argue the federal government has a duty of care to refugees, which cannot be met in immigration detention due to the crowded...

Pressure is growing to release people from immigration detention, with lawyers from Australia’s Human Rights Law Centre mounting a court case on behalf of a refugee seeking protection from COVID-19. They argue the federal government has a duty of care to refugees, which cannot be met in immigration detention due to the crowded conditions there.

This test case illustrates the urgency of the need to release people from detention.

The social distancing measures adopted across Australia appear to be halting the spread of the coronavirus in the general community. But the Australian government continues to fail to provide proper protections for many groups who are most at risk. They include Aboriginal and Torres Strait Islander people in remote communities, people in prisons and youth detention centres, and those who are forced to remain in sites of immigration detention.

This leaves them, and the rest of us, at serious risk of infection.

Read more: We need to consider granting bail to unsentenced prisoners to stop the spread of coronavirus

The British Home Office has begun releasing people from immigration detention to stem a potential escalation of their public health crisis. Some 400 people have been released to date.

In the US, rates of infection in immigration and prison sites have dramatically increased in recent weeks. One prison in Ohio reported 73% of inmates have tested positive to coronavirus.

To stall the spread of infection, several US courts have ordered the release from immigration prisons of people who are at particular risk of COVID-19 infection. One judge found US immigration officials had:

likely exhibited callous indifference to the safety and well-being of the [detained immigrants at risk]. The evidence suggests system-wide inaction that goes beyond a mere ‘difference of medical opinion or negligence’.

The Australian government can no longer ignore calls throughout Australia to take similar action to protect people in detention and the broader community. In February this year, the Commonwealth Ombudsman’s report on monitoring places of detention had already flagged the need for stronger protections for people who have been deprived of their liberty.

The situation in Singapore shows what can happen when measures are not taken to protect everyone. The pandemic escalated there through its rapid spread in migrant worker dormitories. They had been overlooked in Singapore’s “gold standard” response to COVID-19.

Public health experts around the world, including the World Health Organisation, have established that confined sites like detention centres provide ideal conditions for infections to spread rapidly.

The impossibility of social distancing in detention

About 1,400 people are in immigration detention in Australia. This includes Alternative Places of Detention (APODs), where many refugees have been detained for prolonged periods, including in confined hotel settings.

People held in the crowded detention centres and APODs in Australia have highlighted the impossibility of social distancing. They are using daily protests and social media to call for their urgent release into safe accommodation.

What are the risks?

Transmission of COVID-19 occurs mainly through respiratory droplets, as well as through contact with skin and other surfaces. It is highly contagious and spreads quickly in closed spaces.

Reports received from inside immigration detention sites indicate staff have adopted limited or no protective measures. Those detained have limited or no access to hand sanitiser.

There are serious risks due to overcrowding and people are often transferred from one immigration detention centre to another. These factors magnify the risks and are in conflict with government guidelines to control the virus.

These concerns also apply to APODs such as hotels. Here refugees are detained in small, confined spaces with limited or no ventilation. These conditions are even more likely to promote the spread of viruses and disease.

COVID-19 infection is a particular threat for those whose health is already compromised or who have underlying medical conditions, as they are at higher risk of developing serious complications. This includes people detained in Australia who have compromised immune systems as a result of inadequate access to medical care over a number of years.

There are also concerns for the health of those held in offshore detention. Refugees and asylum seekers currently in Nauru and Papua New Guinea are particularly vulnerable because of their living arrangements, the limits on their ability to take proactive preventive measures to protect their own health, their status as non-citizens, and their limited access to medical care.

Recent reports indicate a spike in infections in Papua New Guinea. Should an outbreak occur that is beyond the capacity of the country to respond, the impact for refugees living there would be disastrous.

Read more: Explainer: how will the emergency release of NSW prisoners due to coronavirus work?

As most detainees have varying contact with people outside detention, the risk extends to the broader community. Failure to prevent and control the spread of COVID-19 among detainees will not only expose these groups to unacceptable risk, it will inevitably have a detrimental impact on the community at large.

What action is urgently required from the government?

Immediate government action is required to prevent and control the spread of COVID-19 among people forced to remain in immigration detention.

These measures must include:

They need the government’s protection as much as the rest of us.

We thank Mary Anne Kenny, Madeline Gleeson and Angeline Ferdinand for their advice.