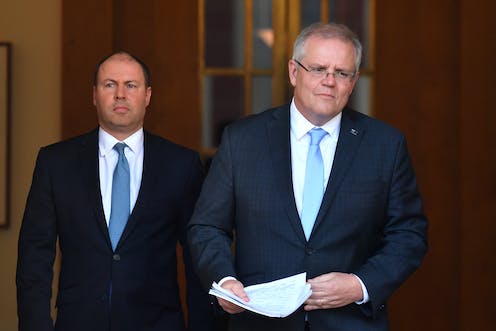 It has taken a pandemic to transform our politics. Who would have thought a Coalition government would substantially increase unemployment benefits or pay the wages of many workers facing unemployment due to the coronavirus pandemic?

As they massively increased government debt in order to save both lives and the economy, Prime Minister Scott Morrison and Treasurer Josh Frydenberg effectively declared that ideology was dead.

Morrison informed Australians that ideologies had been “checked at the door” of parliament. He thanked the ACTU, claiming

Frydenberg reported that even conservative former prime minister John Howard believed there were “no ideological constraints” in extraordinary times like these.

Certainly, the Morrison government has thrown out the strict fiscal constraints and balanced budgets advocated by neoliberal ideology. Liberals who strongly criticised the much smaller deficit Labor used to fund its fiscal stimulus during the GFC have now embraced the need for a truly massive government debt during the coronavirus pandemic.

However, is this really a rejection of ideology, or more a return to previous forms of ideology — shifting from one system of beliefs to another?

Albanese may proclaim we are all Keynesians now as the Coalition acknowledges the need for substantial deficits and increases benefits to shore up consumer spending.

Read more: Win or lose the next election, it may be time for the Liberals to rethink their economic narrative

Morrison’s argument there are no unions and bosses now certainly reflects a change from the Coalition’s relentless neoliberal campaigns to reduce union power and labour market regulation (although unions remain worried by attempts to open up the Fair Work Act).

However, once again, the Liberals may be reverting to earlier forms of social liberal ideology that emphasise the common interests between labour and capital in ensuring the healthy functioning of a capitalist economy. That includes ensuring adequate incomes for the unemployed, both for compassionate reasons and to keep up consumption in the private sector.

Furthermore, despite the unusual praise for unions, it is not as though the Liberals have suddenly abandoned their support for private enterprise. On the contrary, the government’s measures are designed to assist business to “snap back” once the government removes the pandemic restrictions.

Labor has criticised some government measures for not going far enough to support vulnerable workers.

Neoliberalism assisted the private sector by reducing competition from government enterprises, privatising profitable state functions, deregulating the economy and contracting out many government services to private business. The government’s new measures are providing essential financial lifelines that are designed to keep businesses functioning and help them retain their staff in a situation where government health measures have caused major economic disruption.

Meanwhile Labor, after its electorally unsuccessful flirtation with demonising the “top end of town” is also returning to a more traditional Labor conception of the shared interests between at least some sections of business and labour. It is what I have referred to in a previous book as “social harmony” ideology. As Albanese stated recently:

After all, while unions may pressure employers for better wages and conditions, many Labor voters still depend upon the private sector for employment.

It is unclear how long the Coalition’s rejection of neoliberalism will last. Many considered the Global Financial Crisis had discredited neoliberalism. But it survived well enough to be mobilised as a successful electoral weapon against the Rudd government’s Keynesian budget deficits in 2013 and Bill Shorten’s big taxes in 2019.

Neoliberal attacks on wages and conditions contributed to wage stagnation. This resulted in a crisis of consumption that hit private business hard. And that in turn exacerbated the impact of the pandemic on the most vulnerable.

Now government has had to rescue capitalism from a pandemic that the market clearly cannot deal with. Perhaps it is time not for the end of ideology but for the ideological cycle to turn once again.

If so, we wait to see what the new configuration of Australian politics will look like.