On March 15 last year, I lost a close friend in the Christchurch attacks. When Haji-Daoud Nabi greeted a stranger at the door of the Al Noor mosque with “hello brother”, he was shot dead – one of 51 people killed.

I met Haji-Daoud at a Wellington mosque as a teenager, which led to a lifelong friendship. His stories partly inspired my PhD research in Afghanistan. There, I studied the way violent events can shape people’s sense of community.

But I never thought those lessons from Afghanistan would one day also apply in the peaceful country I grew up in.

One year on, disagreeing about how to remember

Over the past year, on my visits home to New Zealand, I’ve spoken with victims’ families, community leaders, people working on the recovery effort, and others working with the royal commission of inquiry into the attacks.

I have watched closely as the community I grew up with has moved forward. I have observed Muslim communities that in many ways are stronger now and better integrated – both with each other, and with the wider public – than before last year’s attacks.

Rather than turning people against Muslims, shared grief and anger has arguably led to a stronger society.

But I have also seen disagreements and differences emerge between Muslims in New Zealand, including around how the attacks should be remembered – particularly this Sunday’s National Remembrance Service in Christchurch.

The theme of this weekend’s National Remembrance Service is ‘We are one’.

Christchurch City Council says Sunday’s service at 3pm NZDT will be jointly led by the local Muslim and Māori communities, along with the council and New Zealand government. Thousands of people are expected to attend, and it will be streamed live online for a global audience.

Some in New Zealand are unhappy about the service, saying they would rather “move on”. Spokespeople from both the Otago and Canterbury Muslim Associations, along with other Muslim groups, have distanced themselves from the commemoration. The general sense is that celebrating anniversaries is not part of Islamic practice.

But not everyone believes this.

The Al Noor mosque re-opened eight days after the shootings. This week, Al Noor’s imam Gamal Houda said the attacks were a “crime against humanity” and should be an exception to normal Islamic rules. And other Muslims, like my friend Aya who lost her brother in the attacks, have been part of ongoing planning and consultation around the commemorations. 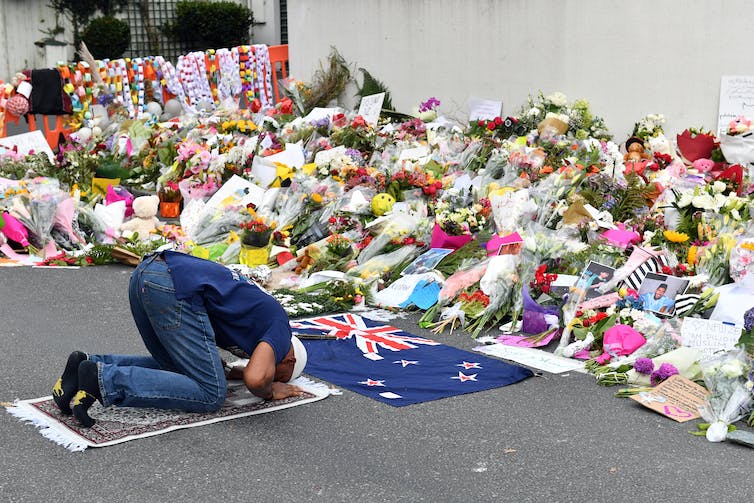 A worshipper prays at a makeshift memorial at the Al Noor mosque, four days after the attacks. Mick Tsikas/AAP

For some, “remembering” is an occasion for silence and moving on. For others, it is a time for protest and a catalyst for change.

One of the recurring themes in my PhD fieldwork in Afghanistan, as well as others who have written on violent events, is that the voices of survivors often get subsumed by the “big story” - what the massacre means for a community or national identity.

But what the Christchurch anniversary highlights, yet again, is there is no single, homogeneous group of Muslims, in New Zealand or anywhere else, who all want and believe the same thing.

No one person or community can claim to own an event like the Christchurch attacks, or what it means, or how it is remembered. Each person mourns in their own way.

In March last year, I couldn’t get a flight to Christchurch in time to be at Haji-Daoud’s funeral.

Watching his funeral via video instead, I was particularly moved by the haka, led by a Muslim, and the procession of bikies escorting the hearse carrying his body to the burial site.

To me, this spoke to who Haji-Daoud was as a person. He was as Kiwi as he was Afghan.

Over the past year, we have seen cultural practices intertwine like this in surprising ways. First, through a spiritual cleansing of the two mosques that were attacked, by both Ngāi Tahu (the South Island’s main Māori tribe) and Muslim leaders.

After that, marae (Māori meeting places) opened their doors to Muslim mourners, and mosques opened their doors in turn. Messages of aroha (love) and kia kaha (stay strong) were written outside mosques, and often translated into Arabic.

I do not think this was a momentary reaction. I think it represents a genuine coming together that has reshaped the way Muslims, and other Kiwis, know each other.

This Sunday morning, in the hours before the much-debated national remembrance service, the Kilbirnie mosque in Wellington has chosen to host its annual open day.

Being part of Wellington’s Muslim community, I remember so many open days like it – filled with fun, laughter, henna painting, bouncy castles, barbecues. In the past, they were days of celebration. This year, it will also be a day of remembrance.

If Haji-Daoud were there, I’m sure he would be behind the barbecue flipping sausages – or at the gate, welcoming strangers inside.